What Happens at Thought Bubble

I spent last weekend at the brilliant Thought Bubble festival in Leeds and - well, as I say, it was rather brilliant. I'd like to reel off a great long post filled with photos of all the cool and lovely people I met, but I won't because (a) I'm terrible at managing to take photos at these things, and (b) to be honest, I barely made it away from the family area / drawing enclosure where I was helping out the Phoenix comic all weekend, and where I was being kept RATHER BUSY. And so, I shall tell you a bit about the various fun things we were doing there!

FUN THING 1: over the whole weekend we were running a competition where we got young (and indeed, old) conventiongoers and Phoenix fans to have a go at designing their own creatures to go in our ZOO OF AWESOMENESS. 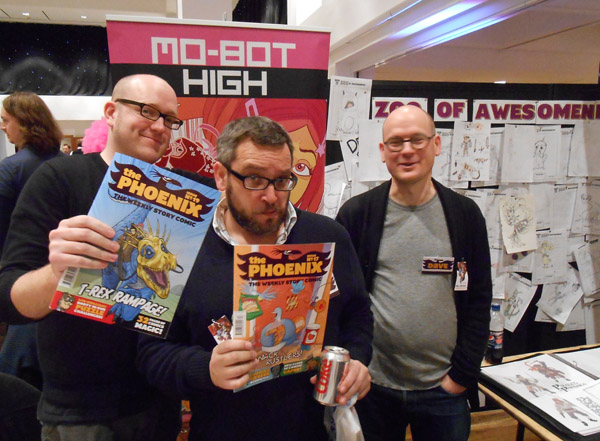 L-R: me and my fellow Zookeepers of Awesomeness Gary Northfield (who was showing of some pages of his new book Teenytinysaurs, which looks *incredible*, and Dave Shelton (who was diligently managing not to spill the beans that his wonderful book A Boy and a Bear in a Boat had just been shortlisted for the Costa Book Awards.) And who are, simply, two of the most brilliant people I know. Photo courtesy of  Richard Bruton, Forbidden Planet 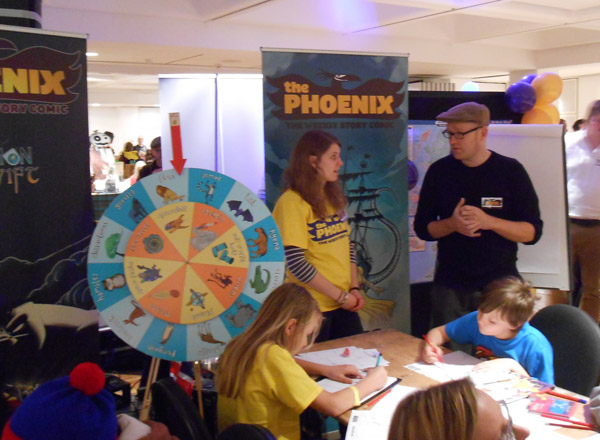 A bunch of crackpot creature-creators hard at work while I discuss the finer points of Jetpack Giraffe xenobiology with the Phoenix's Liz Payton. Photo by Richard Bruton, Forbidden Planet 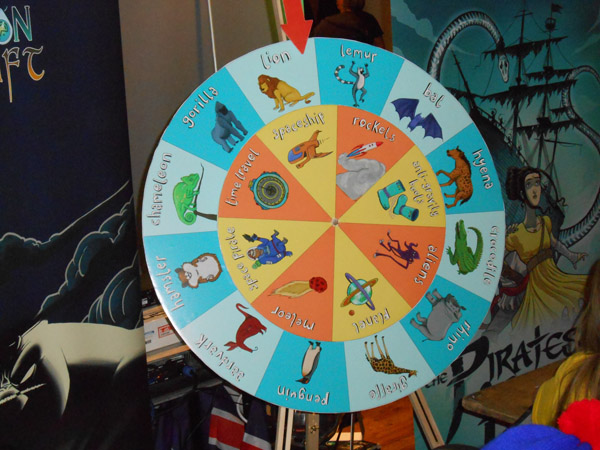 The WHEEL OF AWESOMES, designed and built by the very talented Jo Bowes for The Phoenix. Photo courtesy of Richard Bruton, Forbidden Planet
Many participants chose to use the wheel (above) to get started coming up with ideas, and it was a brilliant thing to have around. There was one little girl aged 3 whose drawing skills were still basically at the 'squiggles' stage but who fell totally in love with that wheel and kept dragging her cosplaying Mum back over to the Phoenix tables every half hour or so to have another quick 20 or 30 spins. It was highly adorable. And that's something so nice about Thought Bubble - it's organisers do seem really commited to the idea that their comics show - like the medium of comics itself - should be FOR EVERYONE, from mature academics to cosplaying teenagers to 3-year-olds who just want to have some fun spinning a brightly coloured wheel.

Needless to say, I applaud this principle.

Anyway, it was hugely fun and I think the competition itself was pretty successful, in that we ran out of entry sheets (and indeed room on the wall to pin them up) by about 10:30am on the Sunday. It was really brilliant to see the sheer flood of creativity and insane ideas pouring out of all these young comics fans. Me and Gary have already picked the winners and indeed I have already drawn the strip in which they are brought to life and meet Professor Panels and Art Monkey and... well, I don't want to spoil anything. I think it's going to be appearing in the last Phoenix of 2012 (issue 52? I suppose?) and it really should be a bit special. Eyes peeled!

On the Saturday, a whole bunch of my fellow Phoenix artists were participating in LIVE COMPETITIVE DRAWING CHALLENGES! I'm using caps locks to try and capture some sense of how stressful this was. Stressful but, of course, brilliant fun, and it seemed to go over very well with the crowds that gathered to watch each bout. 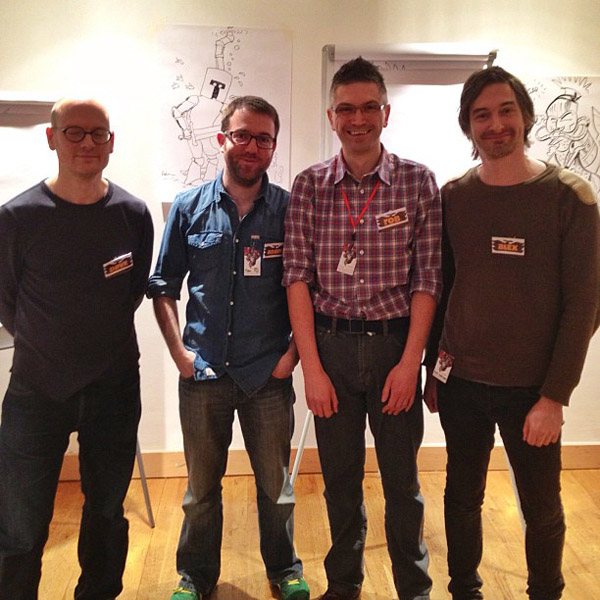 "We who are about to draw ridiculous stuff salute you." - some of the brave challengers. L-R: "Dangerous" Dave Shelton, Adam "the Animal" Murphy, Rob "the" Deas-"troyer" and Alexander "The Assassin" Matthews. Photo by Gary "Gouger" Northfield 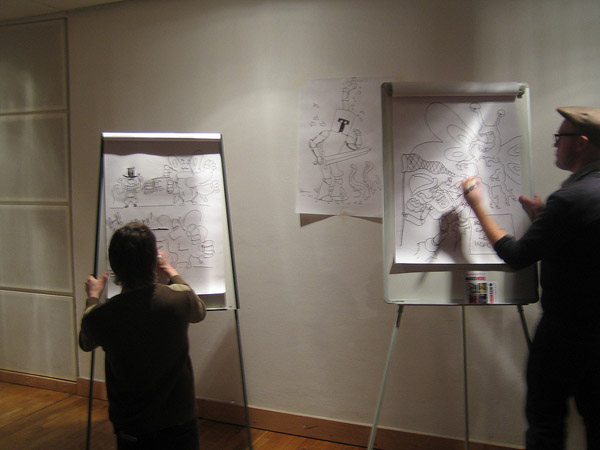 A tense moment from the fiercely-fought first-round fixture between Alex Matthews and myself, in which we are attampting to draw Giant Butterfly-Tamers. The result was too close to call and went to a FRANKLY CONTROVERSIAL judges' decision. Photo courtesy of Craig Naples. 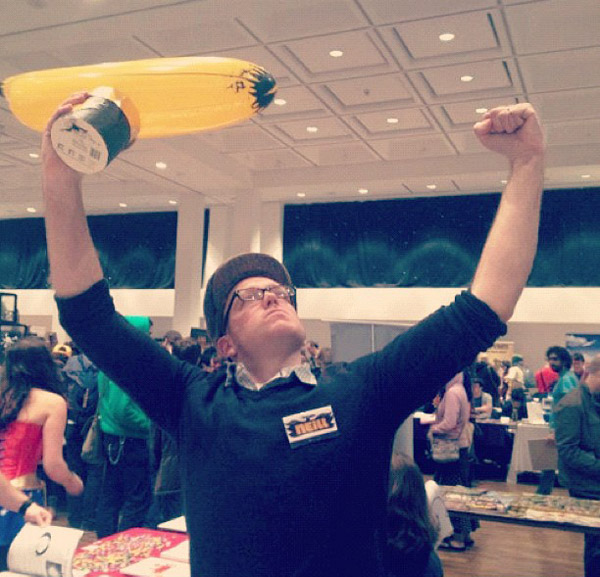 Oh yeaaaaaaaah. Photo courtesy of Ross Fraser, The Phoenix
After the first round, my fellow contestants Gary Northfield and John Aggs attempted to psyche me out, pointing out how utterly preposterous and lame it would be for us all if I won, seeing as the prize was an inflatable physical model of the Art Monkey Top Banana award - an award which I, um, designed. But look, I never win anything. I GOT A BANANA AND I AM KEEPING IT.

FUN THING 3: Comics Workshops! After the SHEER INTENSITY of the Draw-Off the day before, we chilled things out a bit for the Sunday and took turns running quick, informal comics workshops in the drawing area. I did a session on How To Draw (Awesome) Robots, and it was a lot of fun - and again, huge thanks to the Thought Bubble organisers for giving us the space to do this kind of thing. I dropped some Advanced Scientific Knowledge, and some Awesome Robots were drawn! I don't think I've ever seen my Principle of Robotification ("stick some missiles on it...") quite so enthusastically taken on board. 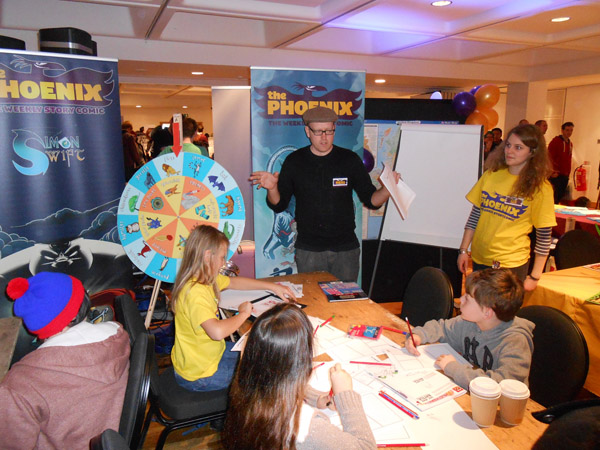 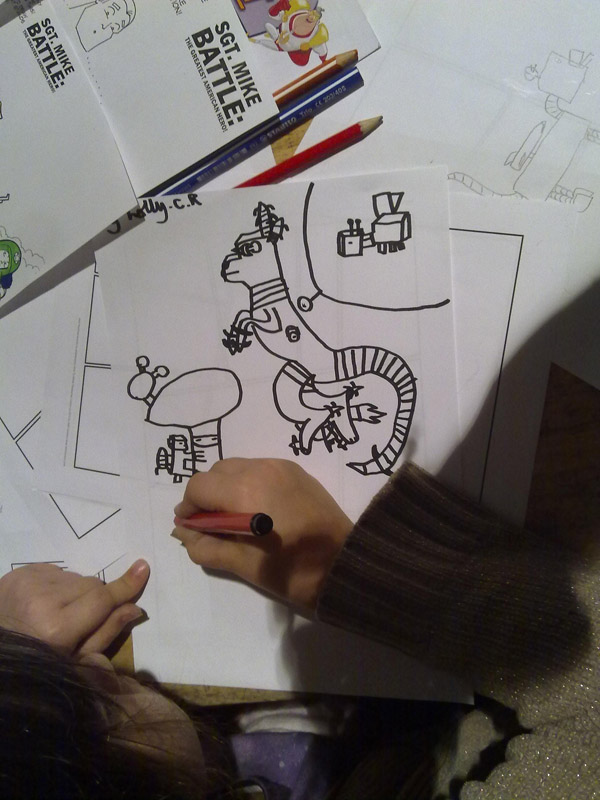 A participant's-eye-view of the workshop! This photo is courtesy of Jennie Rigg, who wrote this great blog post about the experience of taking her daughter Holly to her first comics convention.
This seems an opportune moment to thank all the Thought Bubble organisers Lisa Wood and Clark Burscough and all the brilliant volunteers who helped the event run so smoothly, and also to thank the team from The Phoenix - everybody, but particularly Liz Payton and Ross Fraser who worked incredibly hard to make the weekend a success and who made the competitions, the draw-off and the workshops so fun and easy from my point of view. And the Phoenix Feather Hunt! I completely forgot about that whole thing. 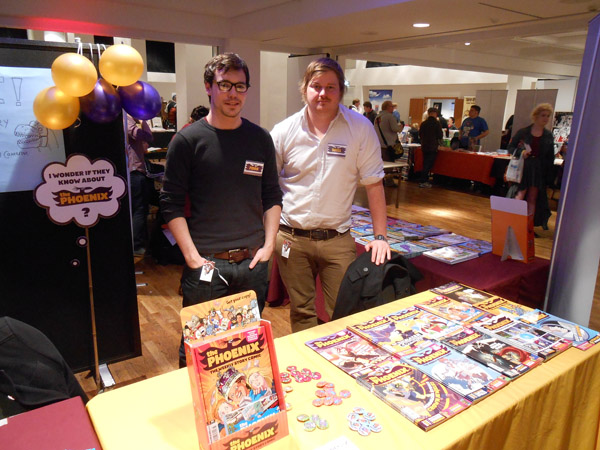 From Team Phoenix: marketing manager Ross Fraser and incoming Big Cheese Editor Man, Will Fickling. Photo courtesy of Richard Bruton, Forbidden Planet
When I finally escaped over to the Main Hall sometime on the Sunday afternoon, lots of the people I spoke to over there said they'd been hearing great things about the Phoenix and that things like the Feather Hunt had made a real sense of buzz about it, so kudos to those guys. Hopefully we managed to spread the word and convert some new Phoenixers. If you missed 'em, check out the shiny new Phoenix Gift Boxes - they really do look cool and would make a brilliant Christmas present. HINT, HINT.
FUN THING 4: Lovely people! The great thing about Thought Bubble, and indeed comics conventions in general, is the chance to meet up and spend time with one's fellow comics people. Because, and I've mentioned this before, they really are the loveliest people. Over the weekend I got to spend lots of time with my Phoenix muckers Gary, Dave and Adam in particular, and it was an absolute pleasure. Also, on the Sunday morning I shared a taxi with Kate Beaton and Scott Campbell, and they both seemed genuinely lovely too, and I tried not to completely lose my cool and just gibber unintelligibly about how much I love Ms Beaton's work. (So, so much.) And just, in general it was a pleasure to meet up with old friends and meet new people - way too many to list here and I'd feel terrified of forgetting anyone, but special mention goes to how nice it was to see my old pals Simon Perrins and Andrew Livesay of Hope For The Future / Flying Monkey Comics again. 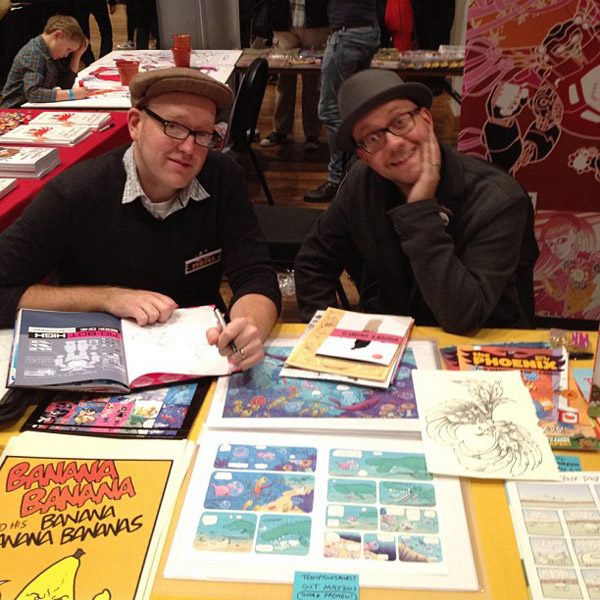 Look, ANOTHER lovely person - the brilliant, incredibly talented Matt Baxter! Photo courtesy of Gary Northfield.
OH and to the nice lady who seemed so delighted with my Kitten Reading Kierkegaard christmas card that I couldn't help but draw her a quick sketch of a Toucan Reading Foucault.

I came home excited and reenergised and just brimming with love for comics, and for comics people. And to arbitrarily pick one thing to sum up so much, Foucault Toucan is basically why.

Email ThisBlogThis!Share to TwitterShare to FacebookShare to Pinterest
Labels: events, the phoenix