I have just spent five minutes amusing myself with the new Bot Factory feature on the MEGATON website - its a nifty little gadget that lets you build your own little MEGATON-style robot avatar for the site, and I designed all the bits and pieces for it. You can end up with some quite entertainingly silly-looking robots, as the examples above should demonstrate. Why not go have a look? There's a couple of comics I drew up on there, and all.

Of course, now I am totally daydreaming about the potential for a Mo-Bot designer using this technology. We'll have to see about that.

Anyway! I'm afraid that due to me suddenly being very busy with work (time wasted designing silly robots notwithstanding) there's no Emergent Comics today, but you have my solemn promise that when the next instalment does arrive, it will be PROPER AWESOME.
Posted by Neill at 16:01 No comments:

Email ThisBlogThis!Share to TwitterShare to FacebookShare to Pinterest
Labels: Megaton, shouldn't you be working? But what happens next? SOMETHING AWESOME I bet. Come on, it's a new page, let's tear it up! Let's have a big splash panel, or something. Let your imaginations run riot!

Today's script was written by Must... Use... POWERS, so many thanks for that! If you are finding your imaginations constrained by the 140-character limit on twitter, I will from now on be accepting scripts for the next panel via comments here on the blog, too. If you want to do that.

Thanks so much to everyone who's been sending in suggestions, this has been a lot of fun for me so far. Big thanks in particular to guys like KDBryan, hardluck_hotel and my own dear pretzelsncheese who have been writing some simply marvelous stuff but have not yet been favoured by the randomizer! Patience, chaps! I'm sure we'll get there in the end.

Here are a couple of elements that particularly stood out which I was sorry not to get to draw yet:

- Cthulhu Ninjas
- Someone Punching A Bear If you want the prestigious honour of being chosen as the author of tomorrow's panel, just tweet your script for what happens next, using the hashtag #emergentcomics! I will then choose one at random using my Magical Random Comics Generator and draw it.

Here's the page so far: More tomorrow! IF YOU WRITE IT.
Posted by Neill at 11:16 No comments:

Emergent Comics, panel 3: IT GETS WEIRD You have all weekend to send in your scripts for what happens next: just tweet your script for the next panel, using the hashtag #emergentcomics! You can check out everyone else's scripts by searching on that hashtag, too, and I would recommend you do so because they are a source of great awesomeness and hilarity. Kudos to you all! Huge thanks to StoopidTallKid for today's suggestion, and indeed to everyone else - I particularly regret not getting to draw the Bear Jet suggested by forzaq8, for example, but them's the breaks.

Here's the page so far! Come back next week, when we'll find out... WHAT'S THROUGH THAT DOOR? ...but WHAT, exactly? It's up to you! Just tweet your scripts for the next panel using the hashtag #emergentcomics, so I can see 'em, and then I will pick one at random to draw tomorrow! Simple.

Today's script was by @Metz77, many thanks! I think it has got us off to a suitably intriguing start. Read his script here!

Note: I forgot to draw her in silhouette. I think I was overexcited by the bear.

Many thanks to everyone who joined in, there were lots of great scripts and I wish I could have drawn a bunch of 'em, frankly. But that would be a whole other thing.

Here is the page so far: BUT WHAT HAPPENS NEXT? You decide!

Okay, so here are the rules for Emergent Comics: you tweet your script for the next panel, using the hashtag #emergentcomics. When it comes time for me to draw the next panel I will count all the entries, and then pick one using a random number generator, and then I will draw that panel!

The story is in your hands! Your only responsibility is to BE AWESOME.

(Note: in case the randomly-picked tweet is a spambot/ explicitly pornographic / just someone saying LOLZJUSTIUN BIEBER or something, I will pick one of the adjacent entries, but otherwise I will be doing my best to respect the randomness of the process. Well, for now. We'll see how it goes.)

I've added a handy #emergentcomics twitter widget to the side of this blog so you can check out what's the haps.
What else? Oh yeah, I'm going to be using a nice regular 9-panel grid for this. I broke the rule on the very first panel and strethed over two, but I figure that's allowed as its an establishing shot. Anyway, here is the page that is waiting to be filled with your genius: Please join in! It will be fun, I promise.

Oh, by the way, here is the script for the first panel, to prove it is doable in 140 characters:

1: woman, masked, asleep on sofa. Caption: AND THIS IS HOW THE WEIRDEST DAY IN MY LIFE BEGAN... SFX: BANG! #emergentcomics Regular followers of this blog may be aware that from time to time I like to entertain myself with Fun Stupid Timewasting Internet Things (see: Neill's A-Z of Awesomeness, Hashtag Funnies). It's been a little while since the last one and I guess I was starting to get too much actual work done, so brace yourself for a little experiment I am choosing, in lieu of anything better, to call EMERGENT COMICS. The plan is:

I am going to draw ONE PANEL of a comic strip every day.

YOU are going to write the script. Yeah, you. Come on, it'll be ace.

To clarify: I will write and draw one panel to kick things off, and then each day I'll be accepting scripts for the next day's panel via twitter. And also possibly via blog comments / facebook etc, depending on whether forcing people to script a panel in under 140 characters seems *too* restrictive. (Frankly, there are many comics writers who I feel would benefit from such enforced brevity, but we'll see).

One other thing I haven't yet decided is whether I'll just pick my favourite script from the suggestions, thus maintaining some semblance of Authorial / Editorial control over the story, or if I should try and use some kind of a random number generator to pick from the pile, thereby throwing it all wide open to the winds of chaos. The first sounds more sensible, the second potentially more interesting. Also potentially more catastrophic. Your suggestions on this point are welcome!

Anyway, hopefully I'll have finalised the 'rules' by the time I post the first panel, tomorrow!
Posted by Neill at 18:56 7 comments: Email ThisBlogThis!Share to TwitterShare to FacebookShare to Pinterest
Labels: piratemonkeyrobotfight

Sale of This or Any Other Century 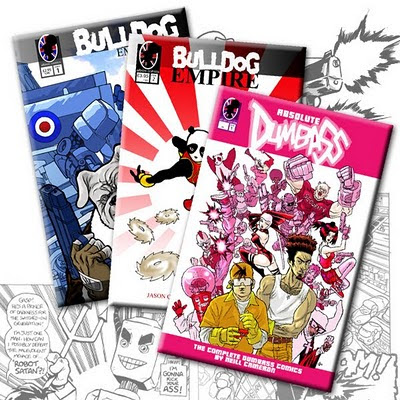 Hey, I made a new shop page on my website, where you can purchase a bunch of my old small-press comics! I'll be adding some more posters, prints and even some new comics soon hopefully, but in the meantime you can purchase: 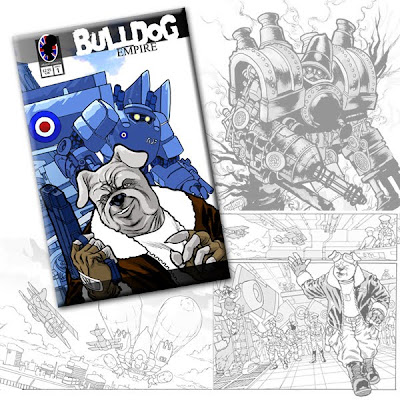 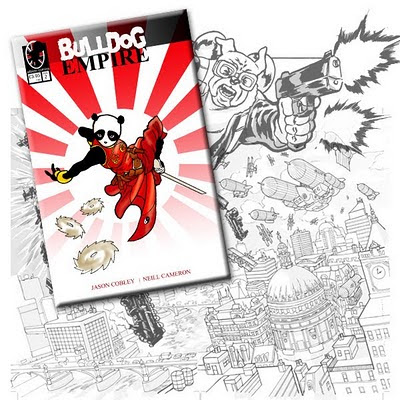 ...issues 1 and 2 of Bulldog: Empire, the series I did with my writer pal Jason Cobley back in 2005-06, which ended up being collected in Best New Manga and kind of pretty much launching my comics 'career'. Such as it is. Also: 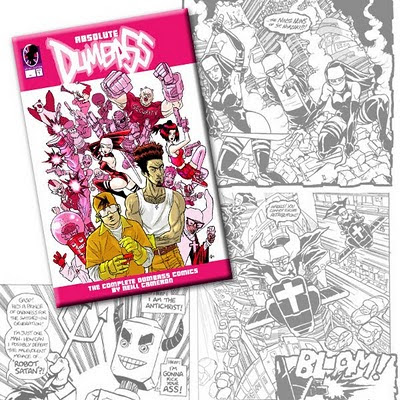 Absolute Dumbass, the collection of all three issues of Dumbass Comics, the book I self-published in my teens and early 20s which is - well, which is just a load of absolute nonsense, frankly. Sweary, sweary nonsense. But in a fun way!

Anyway, why not go and have a look and buy some stuff, so I will be rich - RICH I TELL YOU! Or failing that, so I can actually eat next month. Thanks!
Posted by Neill at 09:53 No comments:

Email ThisBlogThis!Share to TwitterShare to FacebookShare to Pinterest
Labels: shilling

I was talking to some people at Caption - which I really am going to blog about properly one of these days - last weekend, and I mentioned this strip I drew for NEO magazine back in 2006, about a trip Di and I took to Japan. Anyway, it occurred to me that it's not on my website or anything, so I reproduce it here for posterity. The idea was to do a mix of 'humourous travel writing' with some actual vaguely useful bits of information. But, you know, as a comic.

I'm afraid that the lettering is at the lower end of legibile-size in this reproduction, but hopefully you should get the gist. ...ah, that takes me back. I remember staying up all night to finish this off for deadline - you can maybe see it gets a little rushed towards the end there. And this was back when I had a proper job in the daytime and everything. I seem to recall not being particularly useful the next day.

Anyway, there you go. I'd love to do more stuff like this. Look for the book-length blockbuster sequel, coming - well, whenever we can afford to go on holiday again.

Several Drawings of Spider-Man and the Hulk I have been practising drawing Spider-Man and the Hulk! Mostly in an attempt to impress my son.

Was at Caption 2010 this weekend, and had a thoroughly super time. Will blog properly about it soon!
Posted by Neill at 13:48 No comments: