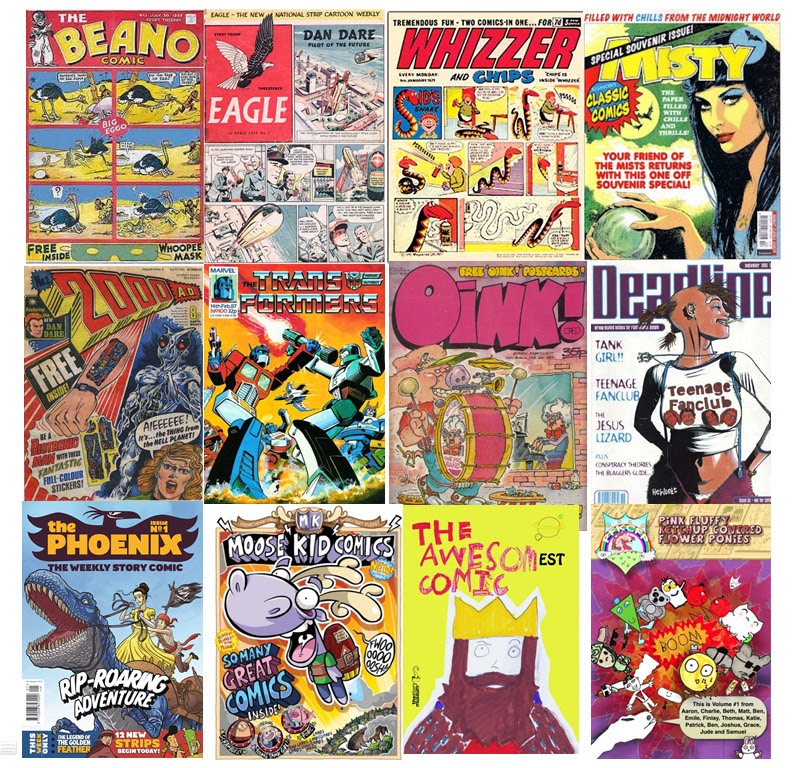 I've technically come to the end of my residency at The Story Museum in Oxford, but I seem to be still hanging around the place a lot, between my weekly Comics Club there and a few exciting bits and pieces I've got planned before the Phoenix Children's Comics Festival in May. One thing we've talked about is putting together a bit of a permanent reading library of children's comics, which I think would be an absolutely fantastic thing - a collection of great comics from all over the world and all over the years that kids can just sit and peruse and read and get lost in.


So: what we need is... well, comics. ALL child-friendly comics from all nations and eras are enormously welcome, but in the first instance what I'm really after is a range of British weekly comics of the 1970s / 80s. Not necessarily long runs of anything, just a couple of Mistys here, a couple of Victors there, a few Whizzer and Chipses in between. One of the upcoming activities I've got planned for Comics Club is all about anthologies, and it'd be really great to show kids something of the range of material, of genres and subject matters, that used to be available. I've got a bunch of early 2000ADs that I'll be donating myself, and it'd be great to have a load of other old comics to keep them company.

(Please note: comics in this library would not be preserved in mylar in pristine condition. They would be read, and no doubt ultimately destroyed, by children. But isn't that the point?)

If you do have any comics you'd like to donate to the museum, the best thing to do in the first instance would be to contact either me - on twitter or in a comment here - or the Story Museum directly, and then we can start to liase about details. Please spread the word, and thank you in advance!
Posted by Neill at 08:55