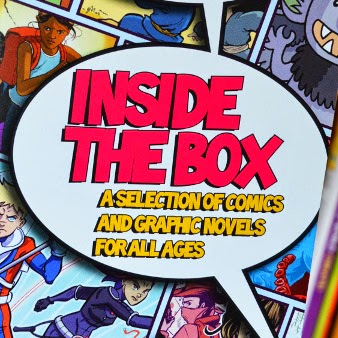 Regular readers of this blog will know I've talked a lot here about the importance of comics for kids, the role they can play in developing literacy skills and inspiring a love of reading and, y'know, all that sort of thing. Unfortunately, I've also talked a lot about how difficult it can be for parents, educators, and indeed kids themselves to know where to start with comics; to find exciting and age-appropriate titles. I've attempted to recommend a few titles from time to time, with my apparently now-annual series of posts Comics For 6-Year-Olds and Comics For 7-Year-Olds (coming this year! Comic-For-8-Year Olds! I guess?), but I'm well aware how brief and incomplete they are. I can't begin to tell you the number of times over the last few years that I've been off doing workshops, talking to teachers and librarians who're interested in using comics but need some pointers where to start, and wished I had just a big LIST to give them. A Big List Of Awesome Comics For Kids.

Well, the good news is, someone made that list! That someone(s) being Melanie McGilloway and Zoe Toft of the Federation of Children's Book Groups, who have put together a new booklist entitled 'Inside The Box: A Selection of Comics And Graphic Novels For All Ages', which... well, which is basically the thing I've been wishing existed for the last five or so years. To quote Melanie and Zoe's introduction:

"The Federation's primary aim is to encourage reading for pleasure and we are sure the books and magazines on this list will do just that. Although comics and graphic novels are sometimes resisted by (adult) gatekeepers, we are great believers in this format and hope that this list shows comics are not just for boys or reluctant readers but for anyone who enjoys great storytelling."

And it really is an impressive list - wide-ranging and thoughtfully curated, with an eminently useful focus on titles that are in print and widely available in the UK. Again, making it easy for teachers, librarians, parents and kids, which I think is so important.

(In the interests of FULL DISCLOSURE I should mention that I was consulted during the making of the list, but I really barely helped at all - I'm quite sure Melanie and Zoe were already familiar with all the titles I suggested, and a whole lot more besides. There's stuff in here that I'd never heard of previously, and which I'm already looking forward to checking out.)

Any teachers, librarians, or just anyone with an interest who'd like to get hold of the booklist, please contact the Federation to request copies - just e-mail info@fcbg.org.uk with your name and address. More info on the FCBG's blog, here. I personally have a thick wedge of copies that I shall be liberally strewing in my wake pretty much wherever I go from now on. Thanks again, Zoe and Melanie!