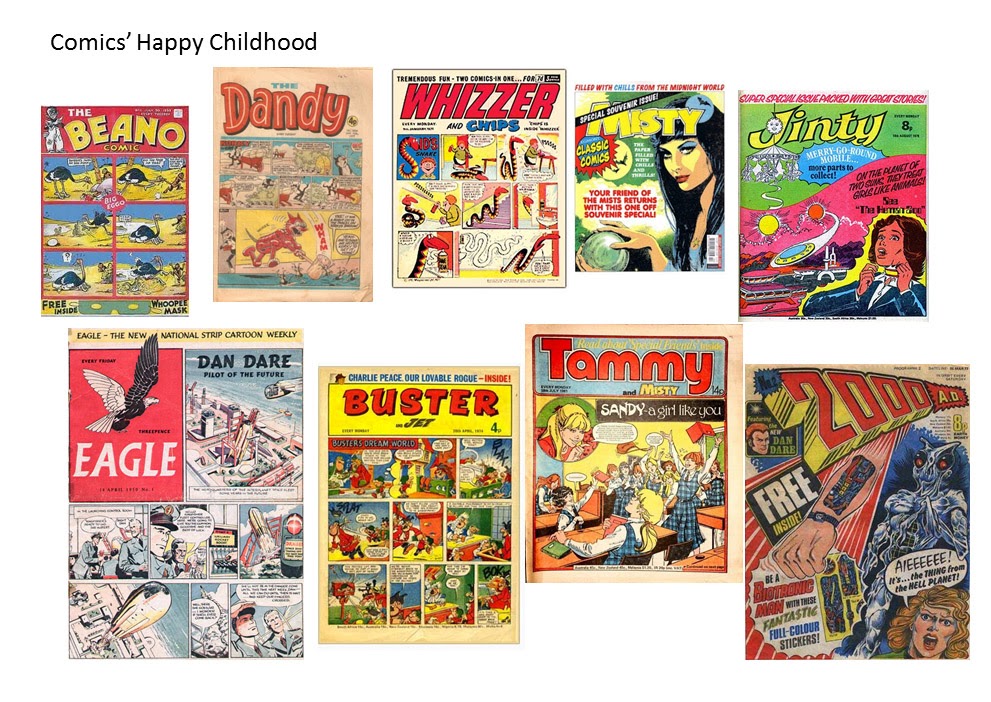 Fig 1: "Those Days Are Passed Now, And In The Past They Must Remain..."

In yesterday’s post I talked about about how important a role comics can play in developing children’s literacy skills and engagement with reading, and how this is absolutely as true today as it was in the oft-mentioned-by-old-people Lost Golden Age of Comics, when it was all fields around here and you couldn’t swing a cat for hitting Tammys and Whizzers and Valiants left right and centre.

I also outlined how there are certain problems stopping comics today from connecting with the widest possible audience of children; problems of ACCESSIBILITY and AFFORDABILITY.

Anyway, today, I’m going to begin proposing some solutions to those problems. Some answers to the central, crucial, all-important question:

How Do We Get More Comics To More Children?

There are several strands to this, several avenues - the newsstands and the supermarkets, digital distribution and the huge, centrally important role I think can be played by Good Old-Fashioned Actual Bookshops. I'm going to try and address all those things, possibly in a Supplemental to this series of posts. But for reasons of space and clarity, right now I'm going to focus on one particular solution, because it's the one I'm currently most excited about and it's one you possibly may not have previously thought of. How do we get more comics to more children?

Wait, hear me out.

Comics is a uniquely engageable medium at this age range - for all the reasons of ease of imitability and low barriers to entry that I've talked about before, it truly is the Have-A-Go Artform. I'm sure there are 9-year-olds out there who've composed their own sonatas and written their own novels and coded their own epic shoot-'em-ups, but for a lot of kids such prospects are going to seem hopelessly daunting. But they can have a go at drawing comics, right now. It's just DRAWING.

And the best part is – you get a bunch of kids making comics, you then have a bunch of new comics for other kids to read! This was one of the big take-aways for me from the comics-making course I taught at the Story Museum this summer. I worked with an amazing bunch of kids and helped them to make and publish an issue of their own brand-new comic, The Awesomest Comic. 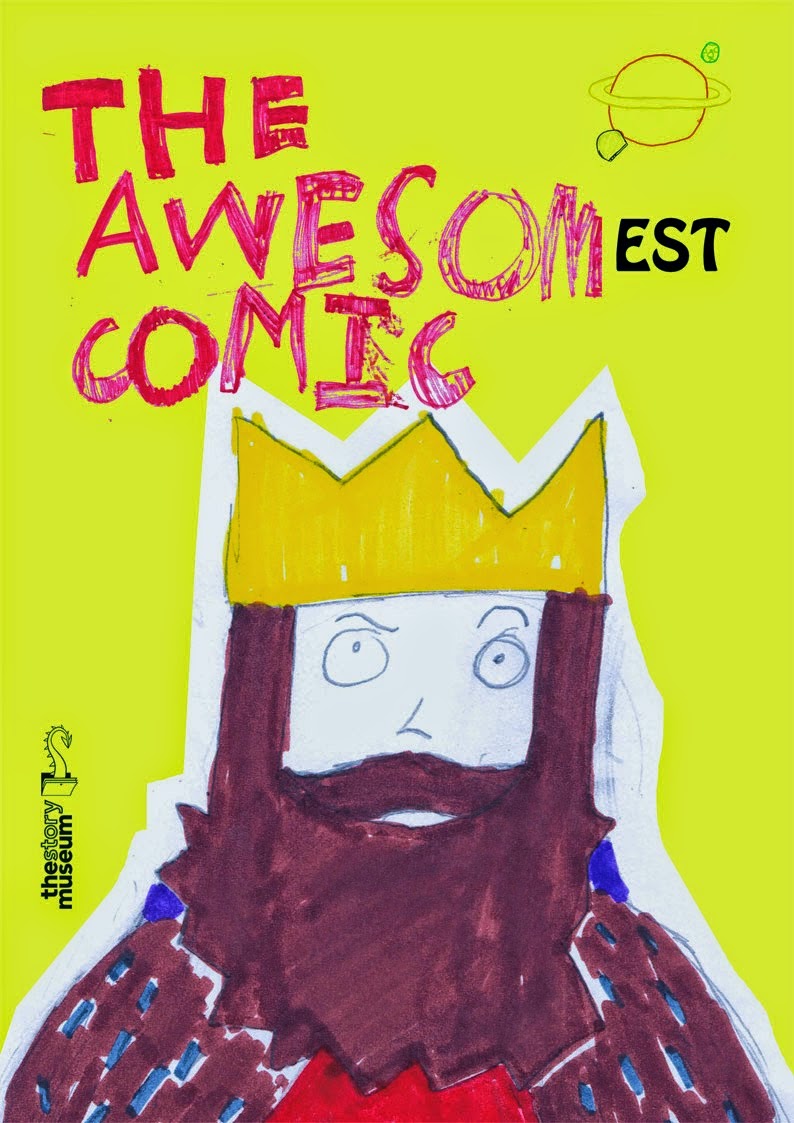 I hoped it would be a fun and rewarding experience for them, and something nice for them and their parents to take home. What I was perhaps not expecting was that the end result would hang together and stand alone so well just as a comic for kids; and for kids who weren't in any way involved in the making of it. It turns out that children are TOTALLY INTO reading comics made by other children. They’re not getting hung up on a lack of anatomical drawing skill or hankering after some high-end colouring techniques and complex gradients. They’re too busy laughing their heads off because someone drew a cheese-obsessed clam giving himself a head injury. (For example.) 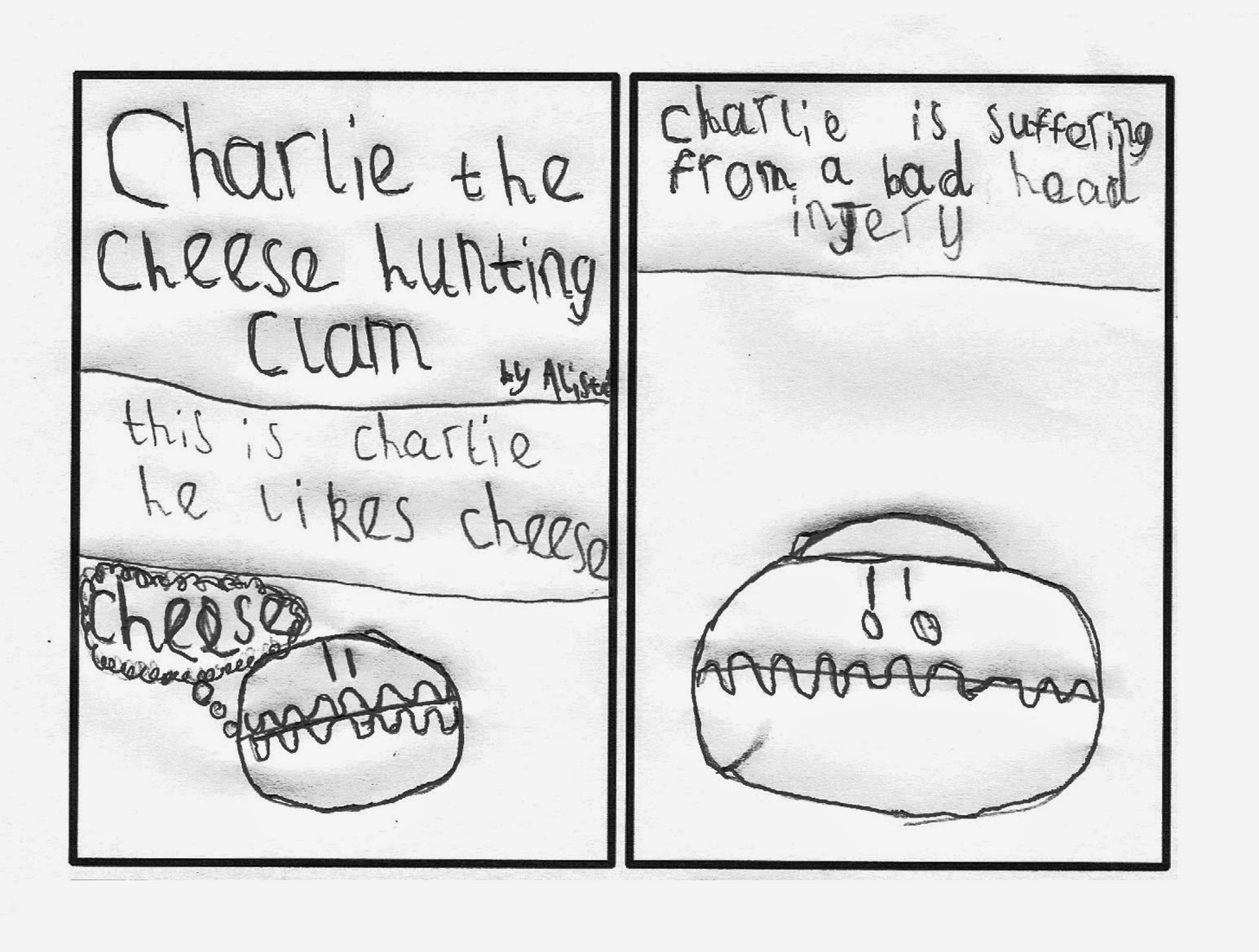 If you’re encouraging children to make and share their own comics, there are some very basic things that are desirable to achieve a Basic Degree of Legibility, but they’re pretty straightforward and can be taught in 5 minutes. In fact, let’s do so right now: 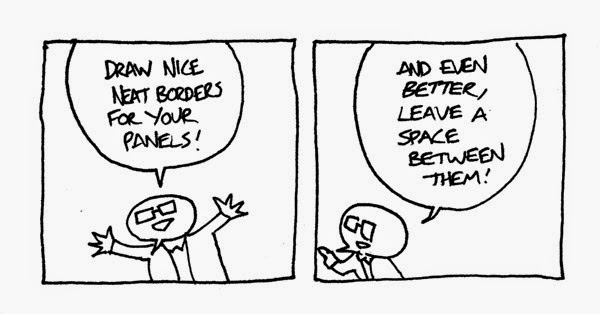 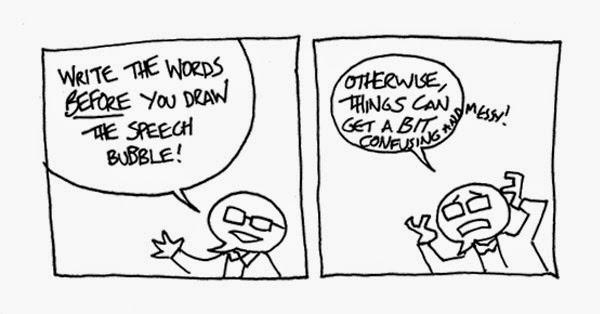 And, honestly, that's about it. Obviously there's a huge amount to share and learn about the art of making comics, and I'll be coming back to that later in the week, but in terms of hitting that Basic Degree of Legibility to let kids get off and running sharing their work with others, that's enough to get on with.

Because that's the thing -  it's now possible for kids to share their own creations much more easily than it was Back In The Mesozoic Era When We Were Young; digital printing and school reprographics departments and, y’know, THE INTERNET make such things eminently achievable, and lots of enterprising young persons are already doing so. I’ve mentioned Zoom Rockman and Jordan Vigay and their amazing comics before on the blog. Here’s another: 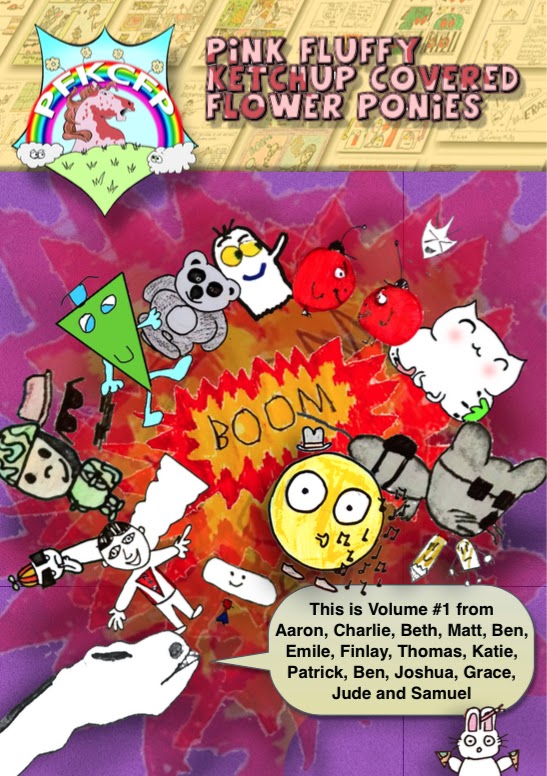 Pink Fluffy Ketchup Covered Flower Ponies #1! A brand new comics, to be released at Thought Bubble this November, by 15 young creators who're part of Team Ketchup - a "Children's comic review group, aged 10-15, about to embark on creating our own comics & helping people to comic jam".

Isn’t that cool? Imagine if there was a club doing something like that in every school. Imagine if in every school across the country, kids were being encouraged to make their own comics and then share them with their friends and with the rest of the school; to collaborate and compete and let their imaginations generally run riot. Imagine if libraries and after-school clubs and youth groups got in on the act, and imagine if there were some easy ways for all those kids making all those comics to share those comics with readers and with each other.

There's your Golden Age of Children's Comics, right there. 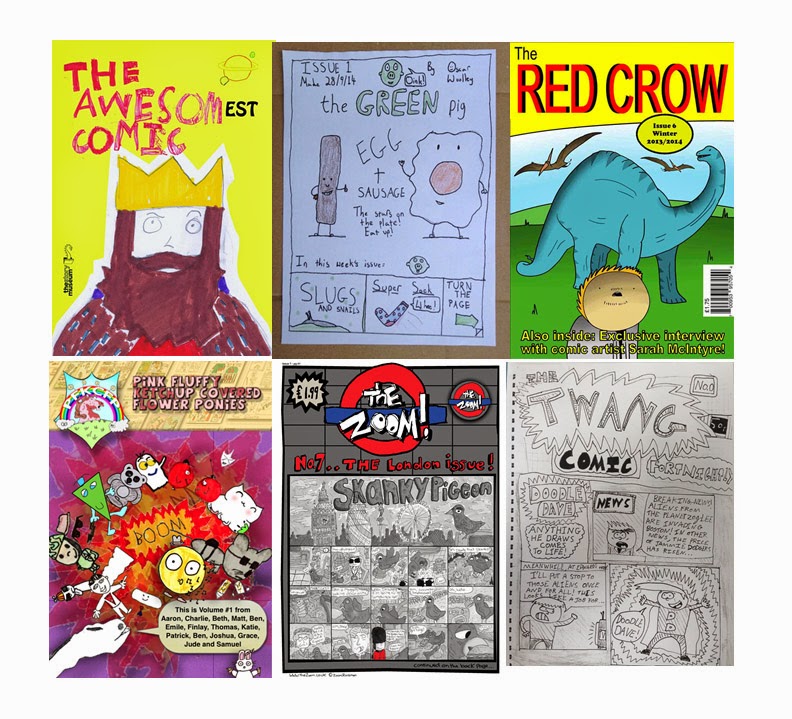 (Clockwise from top left: The Awesomest Comic by Various Artists, The Green Egg by Oscar Wooley, The Red Crow by Jordan Vigay, Pink Fluffy Ketchup Powered Flower Ponies by Team Ketchup, The Zoom by Zoom Rockman, The Twang by... umm, this fantastic kid who was at a school workshop I did the other day but whose name I totally failed to get a note of. I'M SORRY! Your comics were awesome!)

Because look. Here’s the thing. In the 1950s, the Eagle was doing 2 million copies a week. 2 million comics readers. And that - and the decades of abundance that followed, are still held up as the ideal, what we should be aiming to get back to. And I don't think we can, not in that top-down one-publisher-many-readers way, not with the newsstands the way they are now and with pricing and distribution models and all that other slightly dull stuff I talked about yesterday. So maybe we stop judging ourselves against that. Maybe we find some new and more exciting goals for ourselves, for where we are NOW.

TOMORROW: How We Do That, Exactly