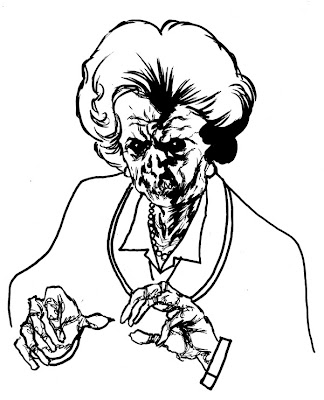 This was part of an idea for a comic called Political Creatures which I did some art for, written by Internet Comics Rumourmonger Supreme (that is his offical title) Rich Johnston. It never actually got further than concept art and a few sample pages, but we got to go on telly talking about it anyway. This proves, if nothing else, that "Zombie Margaret Thatcher wants BRAAAAAIIIINNNNNSSS" is a pretty media-friendly high concept.

(Currently 'Transvestite Dwarf Santa' is the most popular entry search term for people randomly finding this blog, but I will be interested to see if 'Zombie Margaret Thatcher' overtakes it in future...)
Posted by Unknown at 12:10