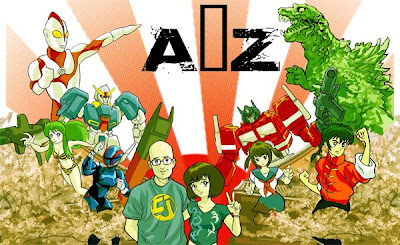 I have been feeling the need lately to just draw some stuff that is fun, for my own amusement. And so I am going to spend the next month doing just that: drawing STUFF that is AWESOME. And the best part is - you get to tell me what.

This is - patently - inspired by Garen's A-Z of Comic Strip Characters from last year, because.. well, because that was fantastic and looked like a lot of fun to do. I'm widening the remit for my attempt, from comic strips to the wider world of pop cultural entertainment. You may suggest characters from film, animation, TV, literature... anything, really, so long as it is AWESOME.

(And yeah, I actually kind of hate the word 'awesome', but it's the best I could think of to encapsulate the general aura of geeky thrills I'm going to be aiming for here.)

So for each letter of the alphabet I am going to let people suggest a character, and I will then draw that character, on a daily basis. Got it? You are also allowed to suggest what that character should be doing, with bonus points awarded for imaginative alliteration.

So for example, for B:

No rules, really, I would merely ask that people keep their suggestions (relatively) clean and keep it to one or at a push two characters in each drawing - no requests for an army of Daleks Destroying Davenport, please.

I have set up a facebook group to keep track of it all, although suggestions are also welcome from non-facebook members, either in the comments here on the blog or via twitter.

The first drawing shall, touch wood, be posted on Monday, 15 June, so you've got until, say, Sunday, to get your suggestions in for 'A'.
Posted by Neill at 11:16