I spent a fantastic weekend just past at Thought Bubble, the Greatest Comics Festival in the World or Certainly Leeds. Amongst the numerous fun things I was doing there were running some informal workshops, teaching kids How To Draw Robots (Awesome Variety). I was doing this with Playful Leeds as part of their year-long March of the Robots project, which is a hugely fun and brilliant idea involving doing all kinds of activities and events to eventually fill Leeds with 10,000 ROBOTS, and which you can read all about HERE.

So here are some of our Awesome Robot Volunteer Design Team from the weekend! 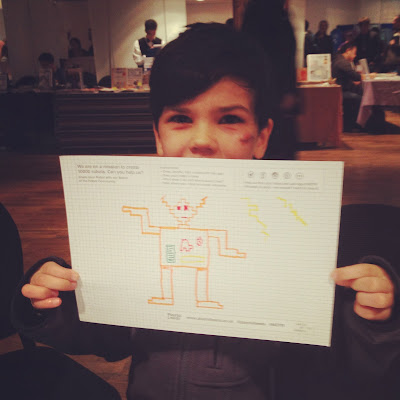 A rather fine Robot That Walks Like an  Egyptian 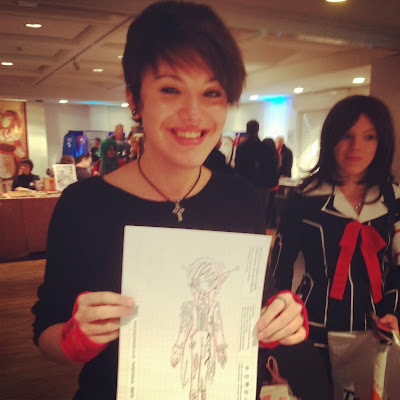 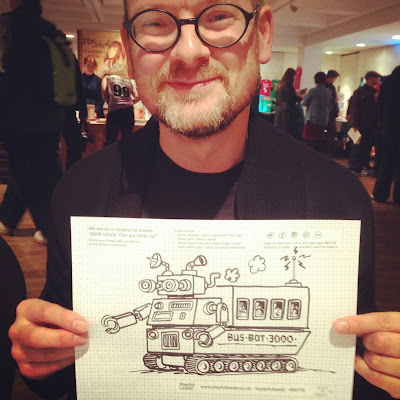 Why, it's award-winning author Dave Shelton and his BUS-BOT 3000! 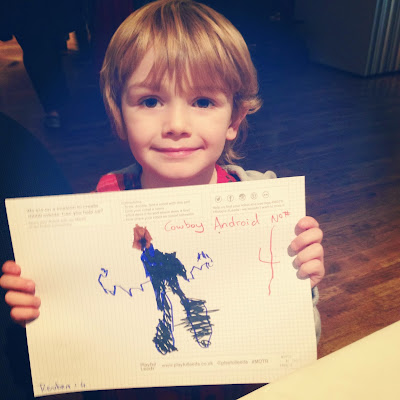 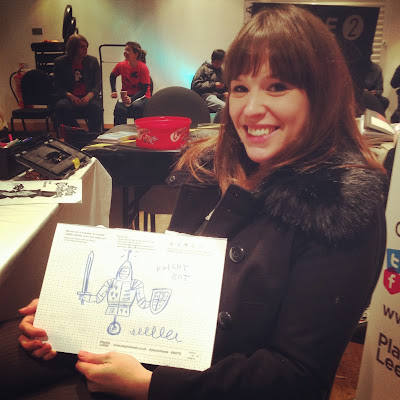 Why it's internationally renowned just-plain-brilliant cartoonist Kate Beaton, with her very venue-appropriate KNIGHT-BOT! (Have you read Kate's comics about knights? They are pretty great comics.) 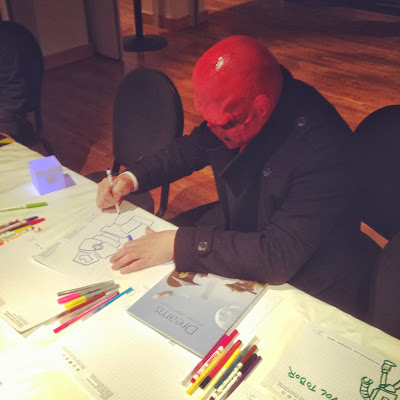 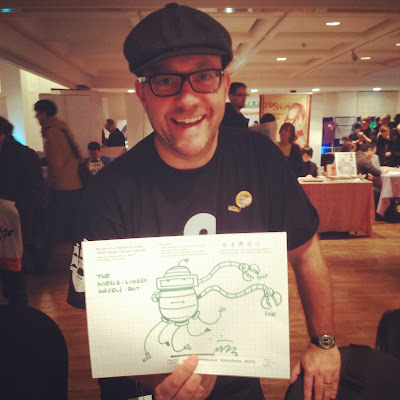 Why, it's Phoenix comics and design superstar Matt Baxter and his "Wibble-Limbed Wobble-Bot". Lord help us. 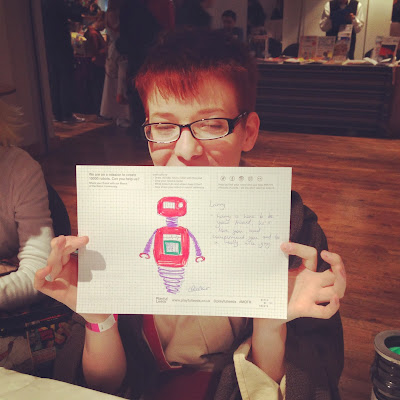 A Robot named Larry. "Larry is here to be your friend, he'll love you and compliment you and be a really nice guy".

I WANT A LARRY. 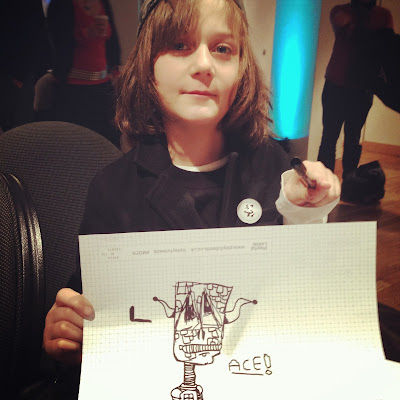 Why, it's award-winning comic creator Zoom Rockman's little brother Ace! Pictured here with the first of approximately ONE BILLION AWESOME ROBOTS he drew over the weekend. 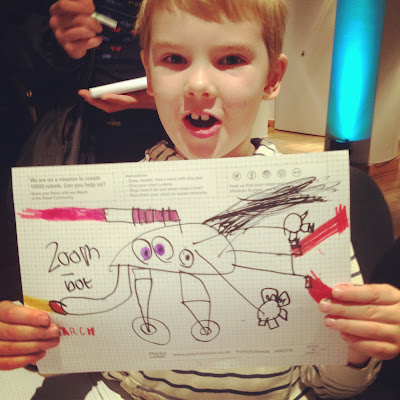 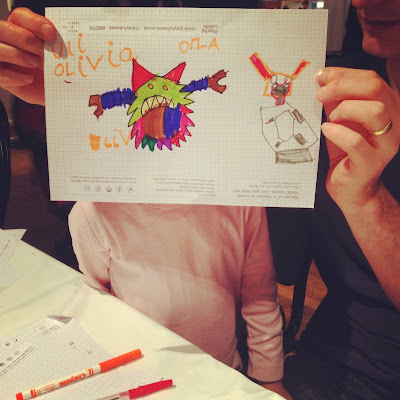 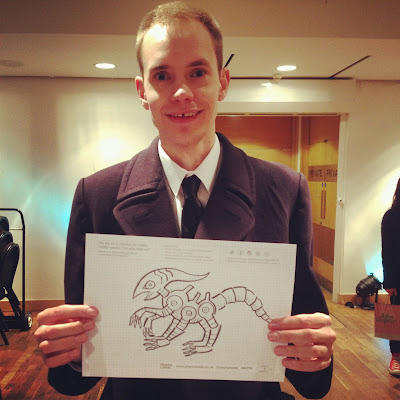 Why, it's the excedingly dapper comic creator Matthew Bramble and his esoteric six-legged sort-of-a-chameleon-I-guess?-bot! 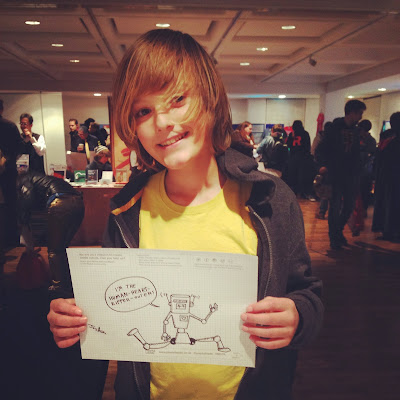 Why, it's Phoenix comics superstar of tomorrow (ALMOST LITERALLY, he's got a page in next week's!), Jordan Vigay! 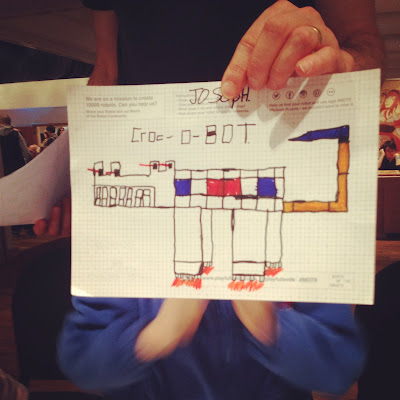 A rather fine Mondrian-inspired robotic crocodile. 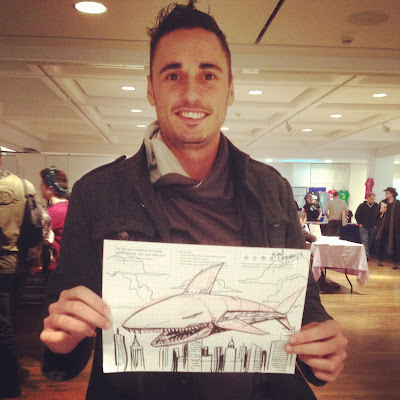 DUDE look at that Shark-Bot. 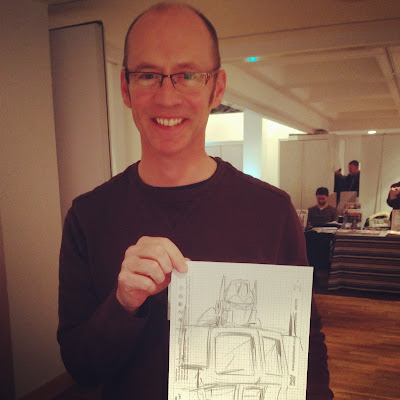 Why, it's legendary Transformers artist and Doctor Who storyboarder Andrew Wildman, with a special Celebrity Guest Robot! 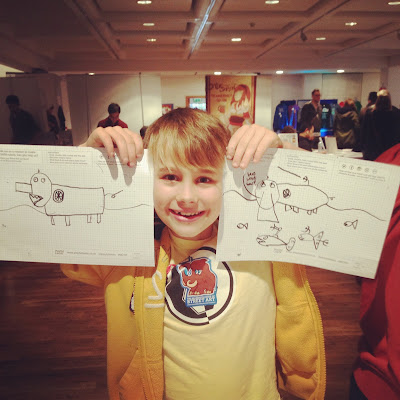 This kid was great, loved Platypuses so much he drew one brilliant Platypus-bot and then immediately drew  another. 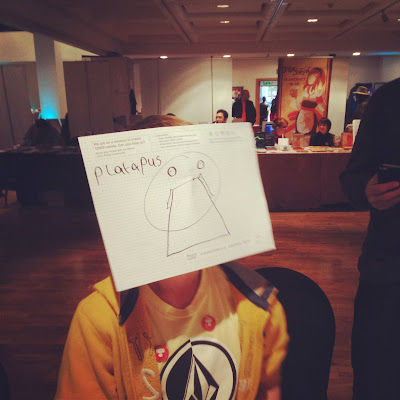 ...and then a third. Which he proceeded to WEAR AS A MASK. 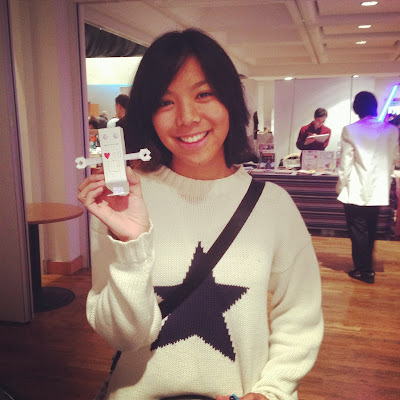 And finally, this young roboticist done FLIPPED THE SCRIPT on everyone, not merely drawing a robot but taking the drawing sheet and converting it INTO A ROBOT. Dammmmnnnnnn!

Those are the few I managed to get pictures of, anyway, but they represent the merest grain of sand in the ENORMOUS BEACH of giant robot designs that had accumulated by the end of the weekend. The stated goal of the MOTR project is to design, construct or otherwise bring-into-being 10,000 robots in Leeds over the year, and I feel sure we must have made at least some steps towards that target at Thought Bubble.

Oh hey, and here is a video of me, drawing a Pie Floater-Bot, for reasons I am not even going to attempt to explain.

Anyway,it was a huge amount of fun, and I'd just like to say an enormous thank you to everyone who came along and hung out and drew robots, and most of all to Emma Bearman of Playful Leeds  for inviting me along to be a part of it, and also for just being generally lovely, and also for buying me stew.

Anyway, that is One Cool Thing I was doing at Thought Bubble. Tomorrow, and indeed every day this week, I will try and post about some of the other ones.