Neill is a total sell-out 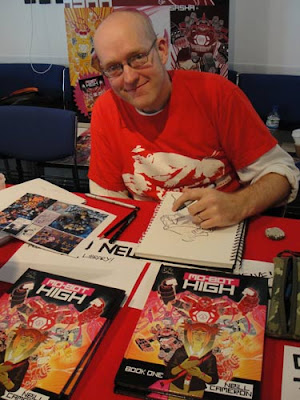 (Photo of me at BICS, in the process of becoming a total sell-out. Nicked from m'colleague Sarah McIntyre's excellent and rather on-the-money write-up of the event)

I spent this weekend at the British International Comics Show in Birmingham, and a very enjoyable time it was too. A large part of this was down to the fact that I was sharing a table with my longtime comics compadre and Bulldog: Empire co-creator Jason Cobley, and a nicer chap to spend a couple of days with hanging out and chatting about comics you would be very hard-pressed to meet. Jason was selling his brand-new anthology Bulldog Clips, which marks the return to comics after a brief leave-of-absence of his creation Captain Winston Bulldog, the longest running character in British small press comics! I think Jason was only planning for Clips to be a one-off, but the response to it was so positive that hopefully it might now become a regular event. I have already volunteered my services for the next issue! 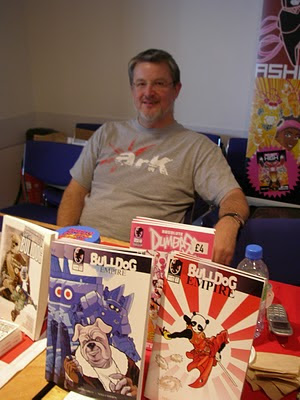 (Jason Cobley, pictured here - and I swear this is an accident - with only those of his comics which I DREW)
Anyway, the main reason I was at BICS was to try and sell some exclusive pre-release copies of Mo-Bot High, and I'm happy to report that I was successful in this, and indeed managed to TOTALLY SELL OUT! Which made me very happy, not least because hardback books are actually pretty heavy, as it turns out, and I was really hoping I wouldn't have to carry them all home.

BICS didn't really feel like a very kid-focused event, to be honest. As the hall first started to fill up with punters, I was a bit worried that the whole weekend would be a bit... well, a bit like this, basically: However, it ended up being a lot of fun, and of the small number of children that were there, I think I managed to send a good proportion of them home with a healthy new interest in Digital Mobile Combatsuits. Case in point: 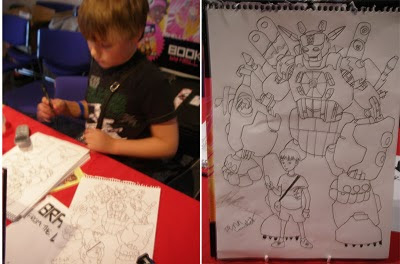 The star of Mo-Bot High Book Two? If he gets his way, anyway.
That's Finn, who bought a copy of the book on the Saturday and then came running back up to the table on Sunday demanding "I WANT BOOK TWO! NOW!!!" Which was gratifying, but as I told him, he should really pass that on to my publisher. Finn kept popping back over the rest of the day to ask me more and more detailed and highly observant questions about the specifics of how mo-bots work, the different modes, certain SPOILER-FILLED aspects of the storyline, etc - and to demand a starring role in Book Two. He ended up making himself so comfortable behind our table - and was so enthusiastic in his efforts at trying to get other passers-by to "BUY THIS BOOK IT'S AWESOME" - that I only found out at the end of the day that a lot of my fellow con-goers had assumed he was my own kid. Nope, just a satisfied customer!

(Also pictured above is Finn's very own mo-bot, a collaboration we worked on over the day. He then insisted I draw my own mo-bot, and we made them fight. The fight... did not go well for me. Come on, Finn's had NINE LASERS. And - and this was entirely his own idea - giant laser swords that he pulls out of his OWN HEAD, which is just straight up the most metal thing I ever heard of.)

It was lovely to meet lots of comics buddies and put faces to some names of people I've 'internet-known' for a while but never met. Great to see Laura Howell and meet her fiancee Tim, and to catch up with the frankly amazing Warwick Johnson Cadwell (whose frankly amazing underwater samurai comic Kani I was very happy to grab a copy of), my old Temple APA buddy Tony Suleri, Rob Davis (who was selling prints of this wonderful Doctor Who poster), PJ Holden (if only ever so briefly), and - gosh, lots more who I hope I am not offending by temporarily forgetting. And to meet new people like the lovely Abby and David of Dumpy Little Robot, our aisle buddies, who seemed lovely and whose comics I look forward to actually managing to check out at a future comics event! (It really is ridiculous, they were RIGHT THERE all weekend. Oh, you know how these things are. Thought Bubble for sure!)

Also: Nigel Dobbyn. But he was so awesome he gets a whole blog post to himself. Coming tomorrow!

So yeah, given that I was a bit apprehensive of how the event would go, I ended up having a really good time at BICS, and as my first attempt at launching Mo-Bot High onto an unsuspecting world it went really pretty well. Did I mention I TOTALLY SOLD OUT?
Posted by Neill at 18:01