Not sure if this takes place in regular Marvel Earth-616 continuity. Lovely work by Rik Hoskin and Nigel Dobbyn on Spider-Man & Friends
As I mentioned the other day, one of the really nice things about attending BICS 2010 was getting the chance to chat for a bit to Nigel Dobbyn, a wonderful artist with a wide range of credits to his name, including a couple in particular that I'd like to ramble on for a bit about here. 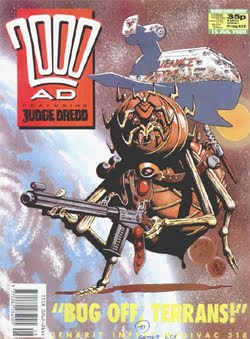 A vintage Medivac 318 Cover by Mr Dobbyn - courtesy of The Internet. Now them's some fine aliens and spaceships right there.
The first of these was Medivac 318, a war-hospital-in-space strip that Nigel drew back in the heyday of my 2000AD-reading days. I absolutely loved the strip; it flipped the rather standard 2000AD 'space war' setting on it's head really nicely by focussing not on the warfare itself but on the medical staff who had to clean up the mess. It had a much more thoughtful, interesting quality than a lot of the strips I've seen in 2000AD, and made for a really refreshing change of pace, I thought. Whilst still having cool things like aliens and spaceships, obviously. And of course, it was all illustrated in Nigel's beautiful clear, emotive artwork. It really was one of my all-time favourite strips in 2000AD. (Along with Time Flies, Hap Hazzard, Hewligan's Haircut and Zippy Couriers. And that list right there pretty much tells you all you need to know about why I will almost certainly never be offered work by 2000AD).

I'm sorry to say I stopped seeing Nigel's work for a long while after that - I think he was drawing Sonic the Comic to much acclaim for a long time, but I guess by that point I was off at university discovering girls, existentialism and Tennants Extra, and kind of lost touch with comics in general. However, I've recently had the pleasure of encountering it again, on the Panini licensed title Spider-Man and Friends, which is a big favourite of my 3-year-old son Logan. I always snap it up whenever I see it in the shops, because compared to a lot of the other licensed comics aimed at pre-school children, it's - well, it's just so much better. A lot of these titles barely have any actual comic content at all, and what there is will just be a one or two-page photo-strip made up of stills from a TV show that you've probably already been forced to watch a thousand times. (The various BBC Worldwide titles for this age-range - Bob the Builder etc - are probably no more crappy in this regard than any others, but they are somehow particularly disappointing. One expects better from the BBC.)

Anyway, Spider-Man and Friends may only have four pages of comics in each issue, but they are four pages of engaging, funny, and lovingly crafted comics that are clearly created by people who know how to make comics and enjoy doing so. Call me sentimental, but I feel that's rather a fine thing. The strips are by Rik Hoskin and the aforementioned Nigel Dobbyn, and - well, Logan loves them, and considering how many thousands of times I end up having to read them to him, the truly remarkable thing is that I actually still like them too. The characters are illustrated with a lovely chunky line, and the backgrounds in particular have a level of care and detail that is above and beyond what one might expect from this kind of a younger-readers licensed title, and often border on being rather beautiful.

And come on, how could I ever get sick of panels like this: That's right, Cap. It does.
So, yeah, it was nice to get to meet Nigel and gush at him about how much I love these little strips for a bit. And for no reason other than that he is a lovely chap, Nigel was kind enough to draw a quick sketch for Logan, of the web-headed one himself. 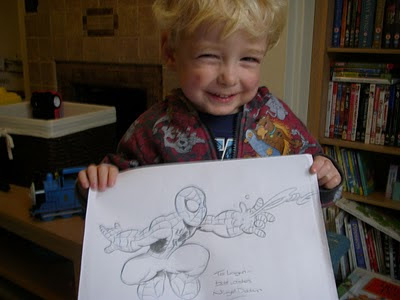 Logan was quite pleased with it.
Posted by Unknown at 15:23

Email ThisBlogThis!Share to TwitterShare to FacebookShare to Pinterest
Labels: Comics, events, people who are awesome