Don't forget, Mo-Bot High season 2 starts in issue 22 of The DFC. Did I mention that it is going to be FLIPPING AWESOME?

Check out more funky DFC-related videos on the new DFC YouTube channel!
Posted by Neill at 15:18 No comments: 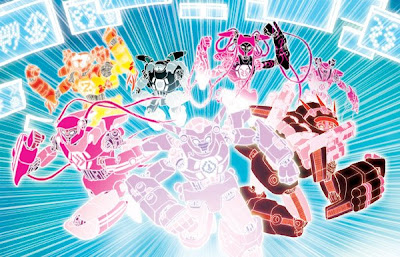 There was something else. I forget what.
Posted by Neill at 14:26 No comments:

There is a brand new animated trailer for Season 2 of Mo-Bot High over on the DFC website. Go check it out! It is both NIFTY and AWESOME.

Be sure to check out next week's issue (#19) for a special teasery trailery preview of the new series, and then it all kicks off proper in issue #22 (on sale 24/10/08). What do you mean you aren't subscribed already? Go and subscribe!

(For more DFC-related goodness, check out this interview with editor David Fickling! And check back here soon for more deliriously exciting mo-bot related news!)
Posted by Neill at 05:06 No comments:

"Hip-hop's dead,
That's what they said on the news.
Nah, it's still alive,
but its getting confused."

Email ThisBlogThis!Share to TwitterShare to FacebookShare to Pinterest
Labels: RLOTD 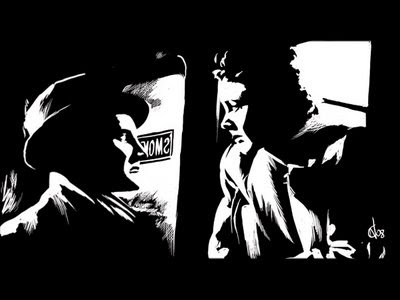 I recently won a competition on the highly enjoyable movie review podcast Filmspotting, and got to pick a film for the guys who host the show to review. I went for Brief Encounter, as - well, it's just awesome, isn't it? A perfect marriage of script, performances and direction. Also, everyone talks hilariously posh, and there's a highly entertaining moment where the kid playing the daughter looks straight into the camera by mistake. Many chuckles!

Anyway, why not go and listen to the show? (The review starts a few minutes in).
Posted by Neill at 14:12 1 comment:

Email ThisBlogThis!Share to TwitterShare to FacebookShare to Pinterest
Labels: Linkage

I thought it might be (mildly) fun and / or interesting to show the process I go through in producing an illustration - in this case a t-shirt design for AR Mcguire - steadicam operators extraordinaire. This was for a promotional t-shirt to be given away to cast and crew on the set of the new Streetfighter movie, then shooting in Thailand.

I started with a rough pencil sketch, based on the brief - to produce an illustration showing the AR steadicam operator as a Streetfighter-style character, surrounded by the actual characters in the movie. I didn't worry too much about likenesses etc. at this stage, as it was just to get the basic gist of the design in place.

This then got changed and added to a couple of times, as the client requested additional characters and various minor alterations. 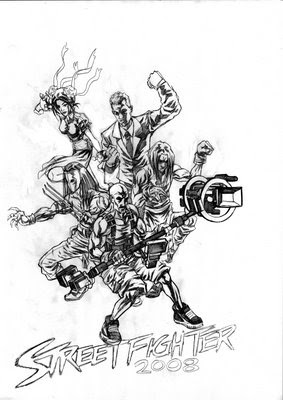 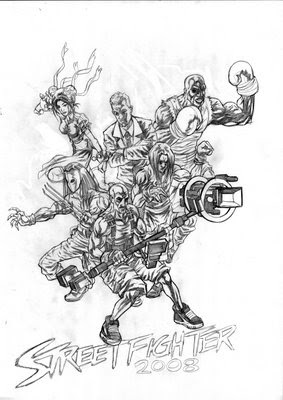 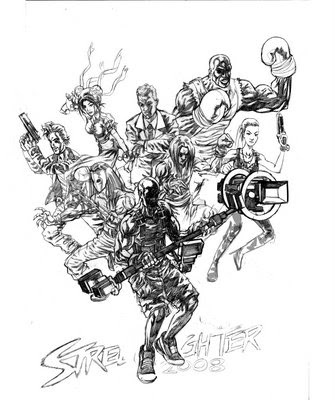 3. A new challenger! And another. I forget these guys' names.
Step 2: Inks

Once the client was happy with the roughs, I then inked the design. I usually do my 'inking' in Manga Studio, but decided to try a different approach for this. I started by drawing in the white highlights on the characters, and then filled in the black shapes behind them. I really enjoyed working this way, and love the high-contrast vaguely-Frank-Miller-y effect it gives you. I'm totally going to try drawing a whole comic in this style. One of these days. When I get a minute.

At this stage I had to use a lot of photo reference to get the actors likenesses right - I'm pretty pleased with the result - while being quite abstract / stylised, I think they do kind of look like the people they're supposed to be. (I forget some of them, but casting highlights include Kristin Kreuk as Chun-Li and Michael Clarke Duncan as Balrog.)

I stuck in a red background to give these JPEGs a nice high contrast look, but the actual files were sent to the client as unflattened files with a transparent background, so they could be printed on the t-shirt colour of their choice.

I produced a couple of versions, one with the black figure art for all the characters and one with it only on the camera operator. 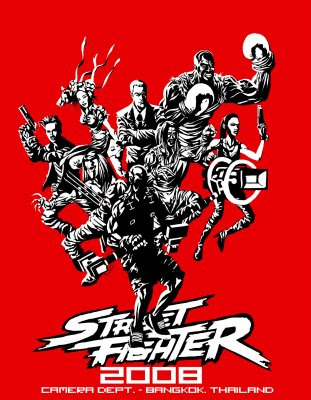 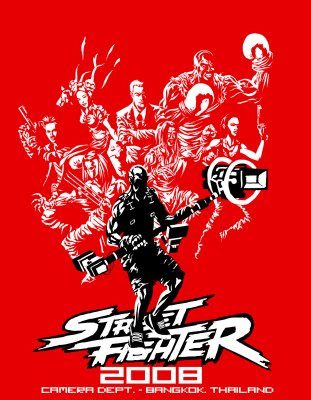