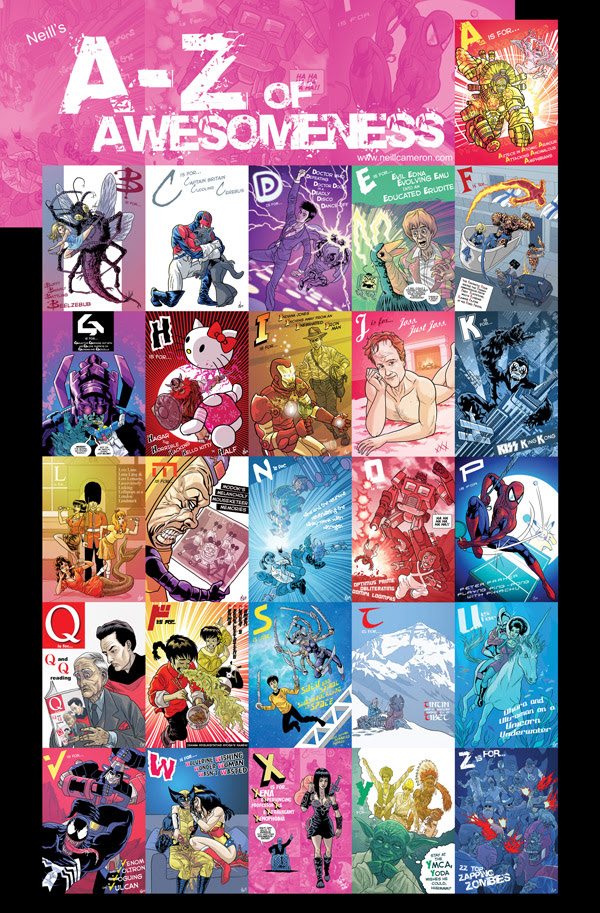 For whatever reason, there seems to have been a resurgence of interest in my A-Z of Awesomeness lately, with posts about it appearing in places like io9, buzzfeed, wired.com, and all sorts of others. This has led to a surge of people getting in touch to express their dismay at the A-Z posters being sold out and asking if I could please print some more. I hadn't planned to, but it was just starting to seem kind of stupid, so last night I ended up caving, printing off a bunch more posters and putting them up for sale.

Here's the thing, though. I never drew the A-Z in the first place with a view to making money from it. It was just supposed to be a fun thing, a creative exercise rather than a commercial one. I only printed the first lot of posters after initial reluctance because I'd ended up losing a lot of money paying out on bandwidth charges when it all first blew up so much bigger than I'd expected. Having sold all the posters and recouped my costs, the idea of making more money off it - well, it was just making me weirdly uncomfortable.

It's not that I have an actual aversion to making money, although I can see how it may be starting to appear that way. The point is: all the characters featured in the A to Z are not my characters. I don't own copyright on Spider-Man, Doctor Who, Gundam, etc. etc. They all belong to other people, and I do take that sort of thing somewhat seriously. If someone started making a bunch of money selling their own posters of Mo-Bot High, I wouldn't like it, right? (Well actually, I would probably be all geekily excited if that happened, but I risk diluting the force of my argument here.)

Anyway, I woke up this morning with an idea which, for me, solves the whole problem and restores the project to it's original unsullied state of pure awesomeness. So here it is: all profits from this second batch of posters, and any subsequent printings, will be donated to SSNAP (Support for the Sick Newborn And their Parents), a charity which supports the Intensive Special Care Nurseries (Neonatal Unit) at the John Radcliffe Hospital, Oxford. It's a place and a team of people to which I owe more than I could ever hope to repay in this lifetime, but maybe a few quid from selling some silly posters will make a start.

So there you go. Buy as many posters as you like, in the knowledge that by doing so you are increasing the sum total of awesomeness in this world.

And I'm back to not making any money, and can relax again. If you would like to support me financially as an artist, and believe me I have no desire to stop people from doing so, you can buy some of my comics - I will try and add them to the shop page soon - or why not go and pre-order my book? It is entirely full of awesomeness, I can assure you.
Posted by Neill at 10:39 9 comments: 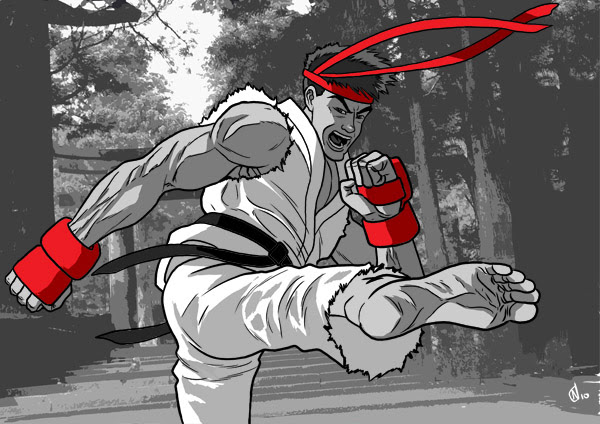 Here's a pic I drew yesterday for #DLC4, the latest instalment of a monthly (?) twitter art jam organised by the incomparable Rusty Shackles. The idea was a bunch of artists on twitter all coming up with new artwork / game boxes for their favourite videogames. Go check out the hashtag, there's some fantastic work on there, including my particular favourite from Benjamin Birdie. I didn't think I'd have time to join in on this one, but you know what? Sometimes it is okay to draw things just for fun. 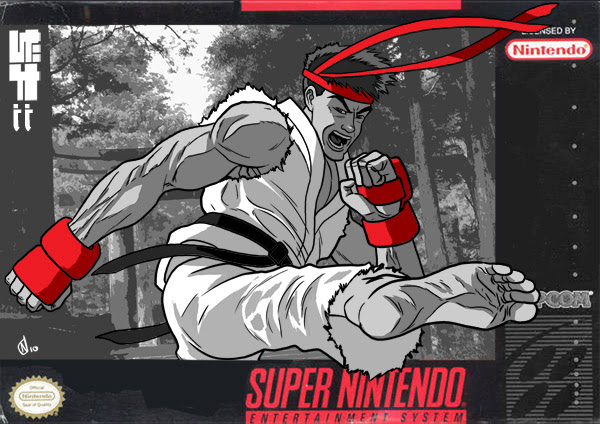 In the interests of full disclosure, I should point out that Streetfighter 2 is probably not actually my favourite game of all time - that honour belongs to either Super Mario World or Twister, Mother of Charlotte (don't ask). But it was what I felt like drawing so nah nah nah.
This was actually the first thing I've tried flatting / colouring using Manga Studio, and I have to say it was a bit of a revelation. After I finished drawing this I then got to spend a couple of hours watching Dave Gibbons demonstrate how he works in MS, and learning some cool new tricks, and all in all I have to say I'm pretty much sold on the new version, and can't wait to start using it to create some comics.

And on that note, I had better go do just that. 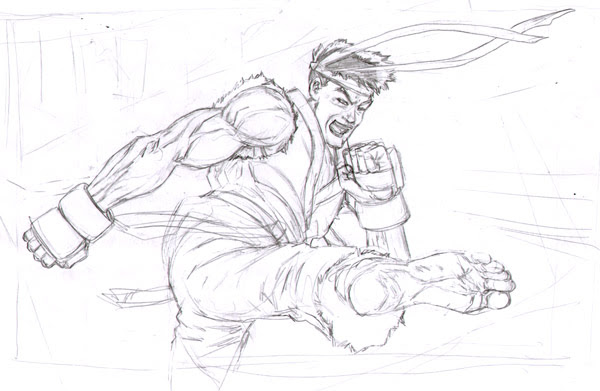 Back when I was selling those posters of my A-Z of Awesomeness last year, I held about 30 copies back out of the print run of 250 as I was convinced the post office were going to lose / mangle / destroy a lot of them in transit. Six months later, and it seems I may have been a little paranoid there.

I have 25 copies of the poster left now and, in response to a recent mini-flood of enquiries that I think stem from the A-Z getting a big-up on io9, I'm offering the remaining 25 copies up for sale.

Run don't walk over to the print shop page on my website if you would like to snag one. After this there shall be no more! No, really.
Posted by Neill at 19:43 4 comments: 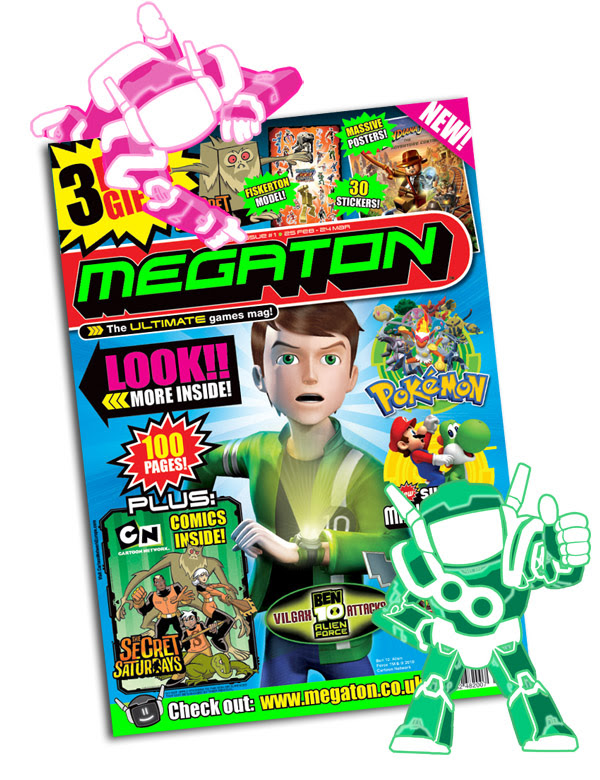 Here's the cover to the first issue of MEGATON, a new gaming magazine for kids which launched this week from Skyjack Publishing! And a couple of my little robots, expressing their approval! It's a great package - 100 pages of reviews, tips, puzzles, stickers and general game-related awesomeness, with a big chunk of Cartoon Network comics generously crammed in the middle for added fun. And, of course, lots of ROBOTS. 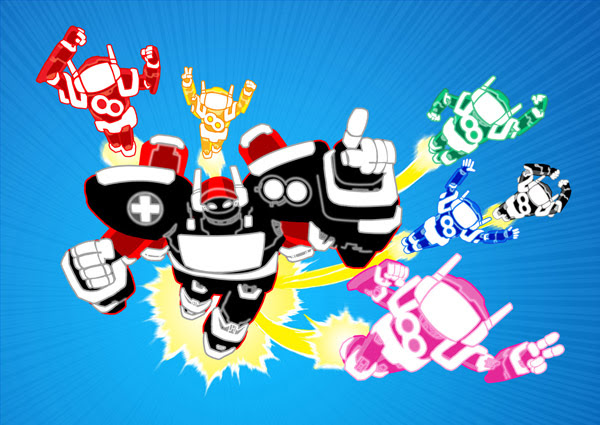 On sale now in all good newsagents! And check out the MEGATON website for more fun stuff, coming soon.
Posted by Neill at 10:56 No comments:

My dear friend, acclaimed writer and corrupting influence who helped drag me into this hellish life of comics Jason Cobley is having a sale on his blog where you can buy a copy of his collected Best of Bulldog for a mere fiver! To commemorate this occasion in momentous fashion I thought I would... uh, stick up a bunch of old Bulldog art I could find lying around on my hard drive. Hooray! 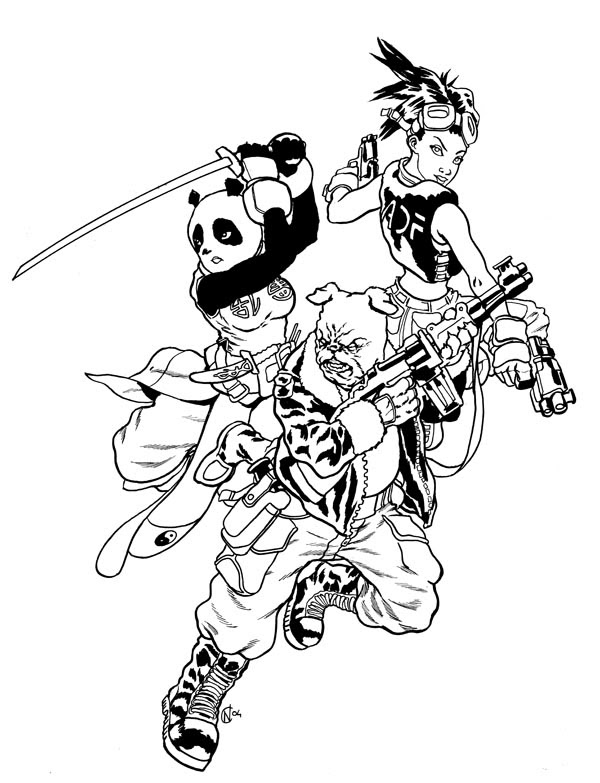 I contributed art on several strips over the course of Bulldog Adventure Magazine, Jason's long-running anthology UK small press comic which chronicled the adventures of Captain Winston Bulldog. (He was a dog who flew planes, shot people, and was often rather sarcastic. It was pretty awesome.) 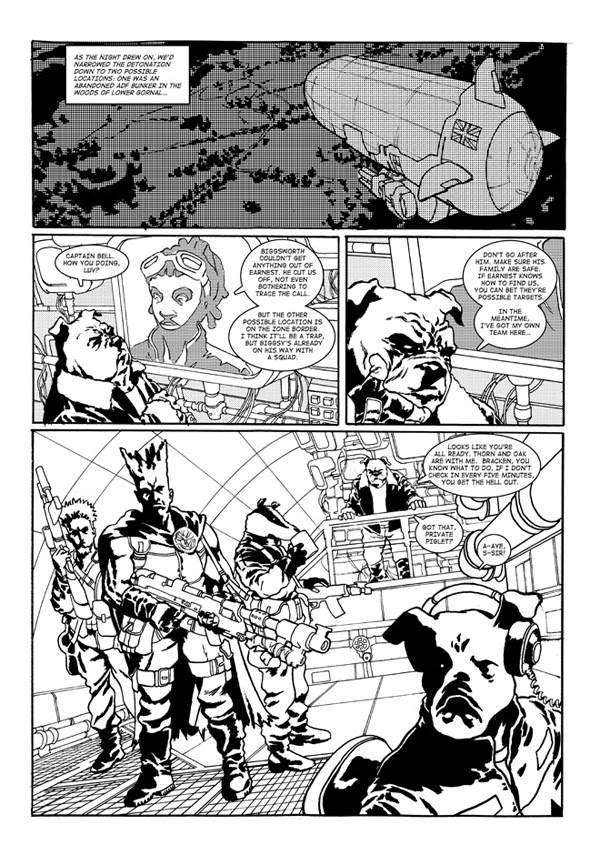 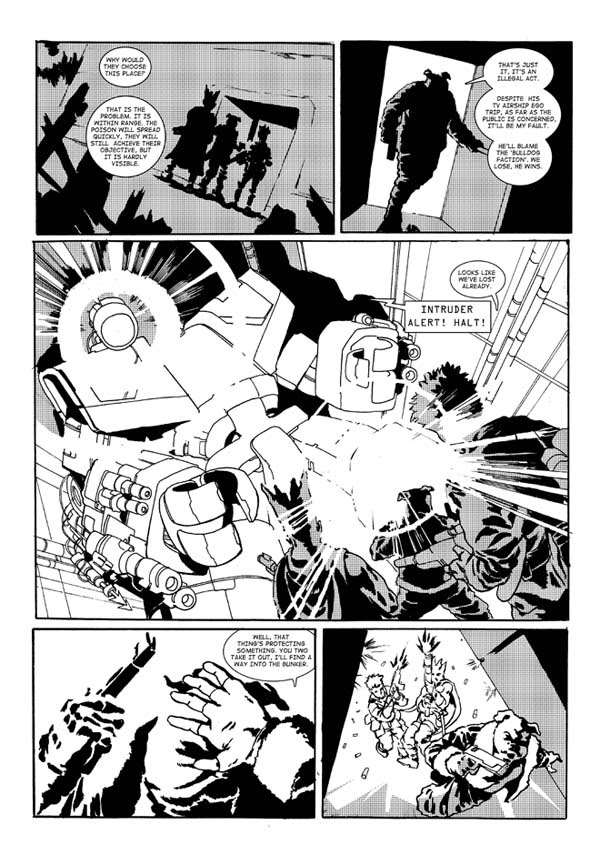 The above pages are from what I think was the last strip I drew for BAM, and unfortunately are the earliest stuff to be found in the dark depths of my backup drive, so in order to see my truly embarrassing teenage artwork I guess you will have to go and buy the book! (That wasn't much of a sales pitch, was it? You really should go and buy the book, it's got some great stuff in there - early work by Paul J Holden, Paul Harrison-Davies, the mighty Mitzi and many others, not to mention several gorgeous strips by Kieran Macdonald, who was and remains one of my favourite comics artists of all time, despite not having actually drawn any comics in 15 years or thereabouts.)

Anyway, after BAM wrapped up me and Jason did a Bulldog mini-series called 'Empire', which I do still have a bunch of sketches and development art and stuff lying around for, so here is some of that! 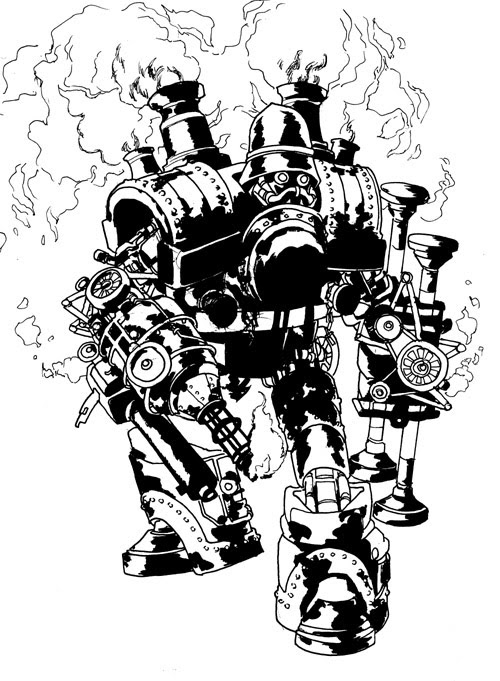 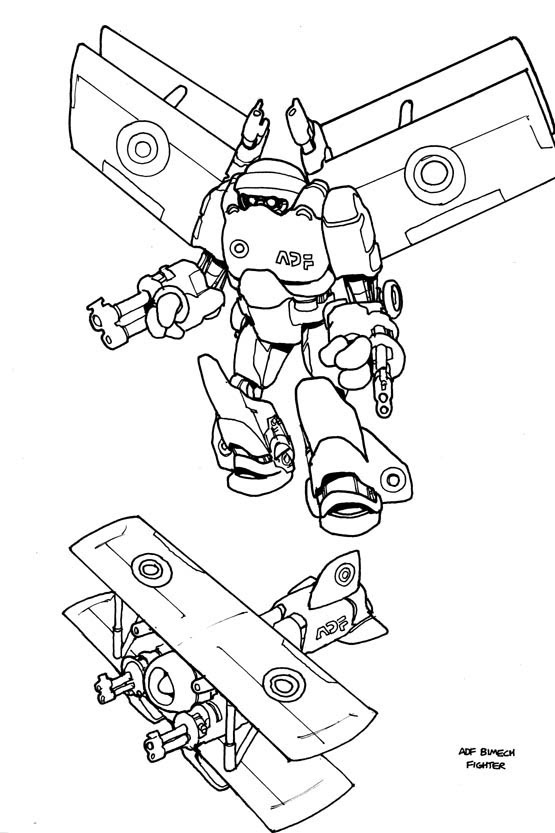 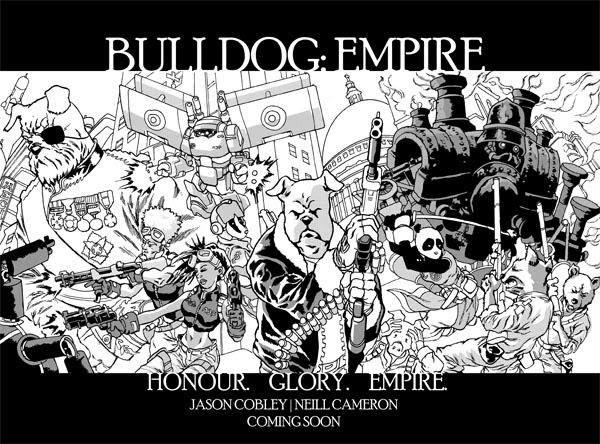 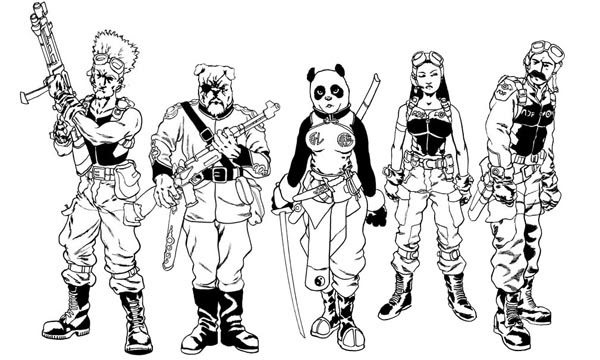 Empire then got picked up and included in the Mammoth Book of Best New Manga, and after that I was such a big-time rich famous comics artist* I didn't have time to draw small press stuff any more, but I do have a bunch of copies still lying around in a box in my studio somewhere, which a couple of people have asked about recently, so I will try and set up some means to actually purchase them via the interwebs. Check back later this week! And in the meantime, again, why not go buy Jason's book? 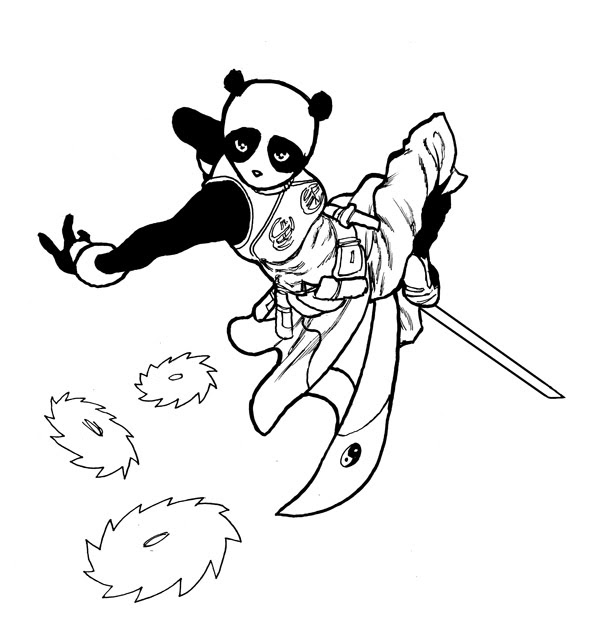