Imagine All The People (Drawing Ninjas) 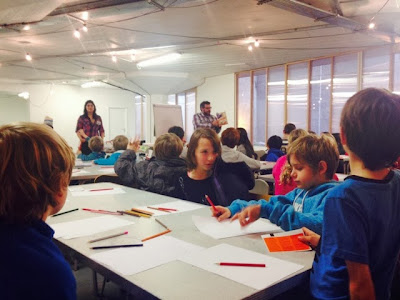 Kids learning to draw Ninja Pancakes (and other important matters) from the incomparable Gary Northfield, ably assisted by Charlie Rashid from the Phoenix.

I had a great day last week with several of my compadres from The Phoenix, putting on a special one day children's comics event at the South Bank centre in London as part of the Imagine Festival there. Gary Northfield, Adam Murphy, Zak Simmonds-Hurn and last but by categorically no means least the mighty Etherington Brothers were there, along with Caro, Tom, Lizzie, Charlie and Joe from the Phoenix; running comics workshops and generally hanging out with kids and chatting and drawing and sharing tips on making comics! 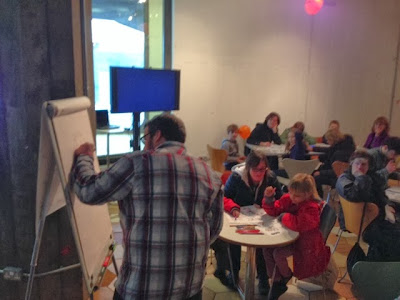 It was a really fun day, and seemed very busy, so I hope we managed to spread the Good Comics Word to a few new interested earholes!

One unscheduled bit of fun: when we arrived in the morning I noticed that the space we were in featured a GIANT BLANK WHITE WALL that was frankly crying out to have some comics drawn on it. So that is what we did; taking suggestions and ideas from kids who were hanging out and drawing, and spinning those ideas into a story*.

*Using 'story' in quite a loose sense. 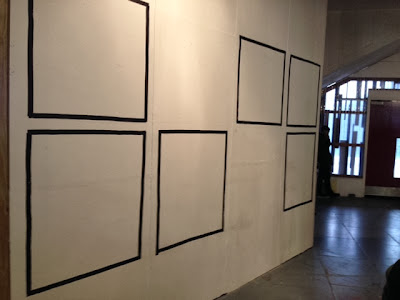 Here's the wall, as we started to draw panels on it. 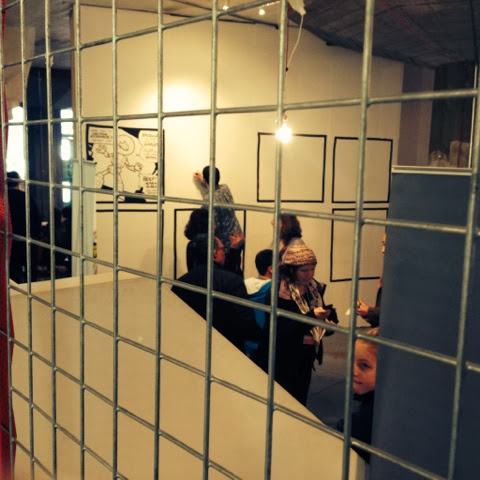 Here's Zak, drawing his bit! I know this photo makes it LOOK like we had trapped him in a cage and forced him to draw comics, but that is honestly only partly true.

And here's Will, a young Phoenix fan who was so full of good ideas and drawing talent that I thought he ought to take a turn on the wall himself. I was very impressed with his moxie (?) - drawing live on a big wall with graffiti pens while a bunch of people watch you can be a bit intimidating, but Will dived straight in. Good man! 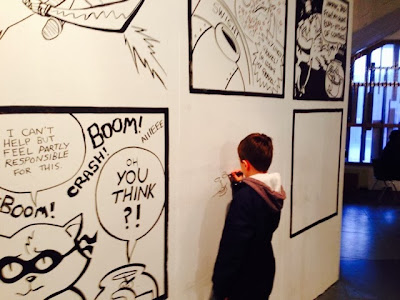 And here's the comic itself, panel by panel! 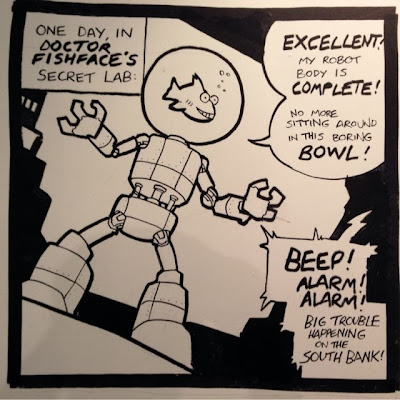 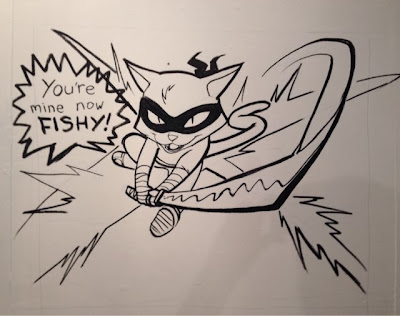 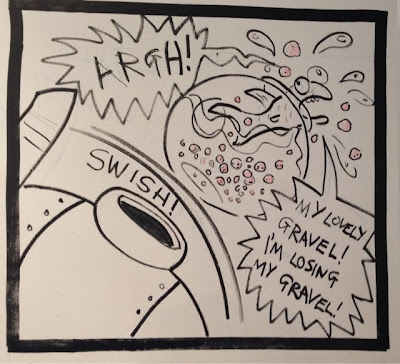 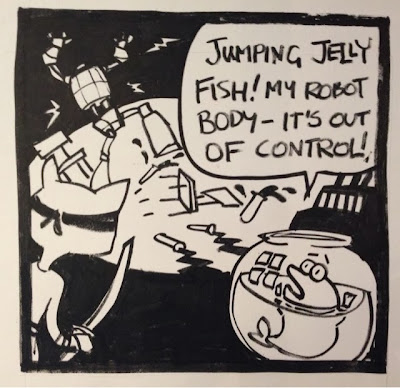 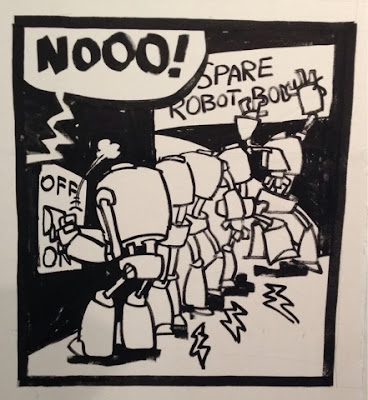 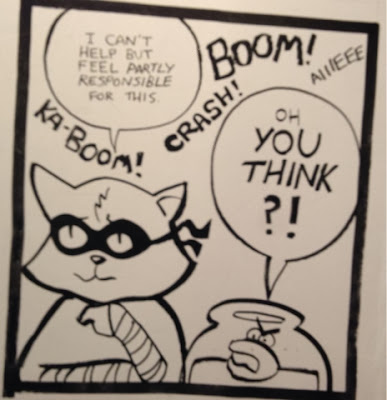 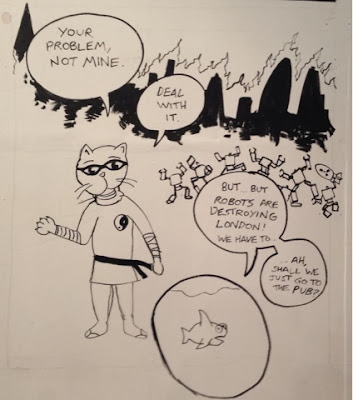 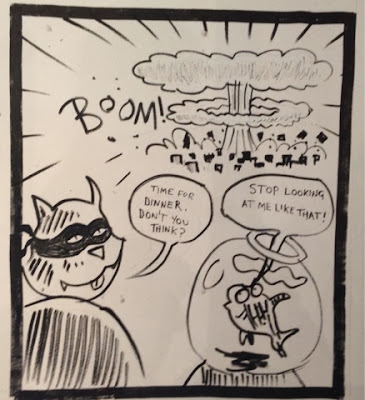 And here are the Crack Graffiti Comics Art Team, with their handiwork! 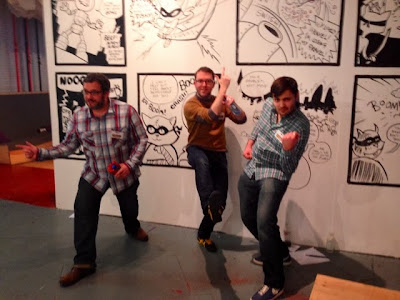 Huge thanks to Gary and Zak and Adam for pitching in and helping make something so cool, when they clearly had quite enough to be doing already without me throwing more dumb ideas at them. And also to Will, and all the other kids who helped us out with ideas and OUTRAGEOUS PLOT TWISTS. And finally, huge thanks to Anne and the team from the South Bank Centre for so kindly allowing us to make a big mess on their lovely pristine white wall, it was a lot of fun.

For BONUS kids-making-comics-at-Imagine fun, check out this great report from Louie Stowell, who ran a workshop a couple of days after us in association with Inclusive Minds, and it sounds like it was a great event. Read all about it here: http://loustow.wordpress.com/2014/02/24/imagine-festival/
Posted by Neill at 16:30 1 comment: 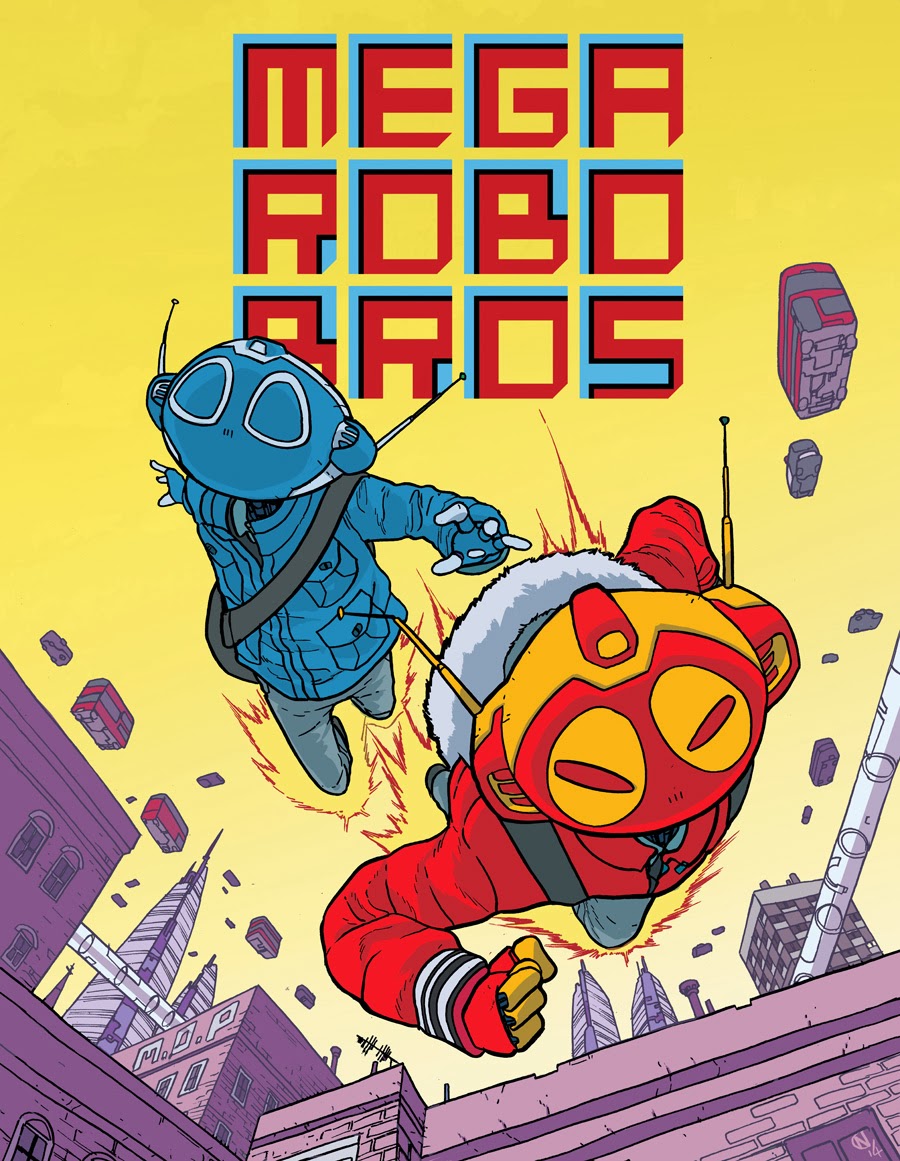 Hey! My NEW COMIC, Mega Robo Bros, begins in this week's issue of The Phoenix, and you do not want to miss out! It's a great issue all round anyway, but also: ROBOTS! 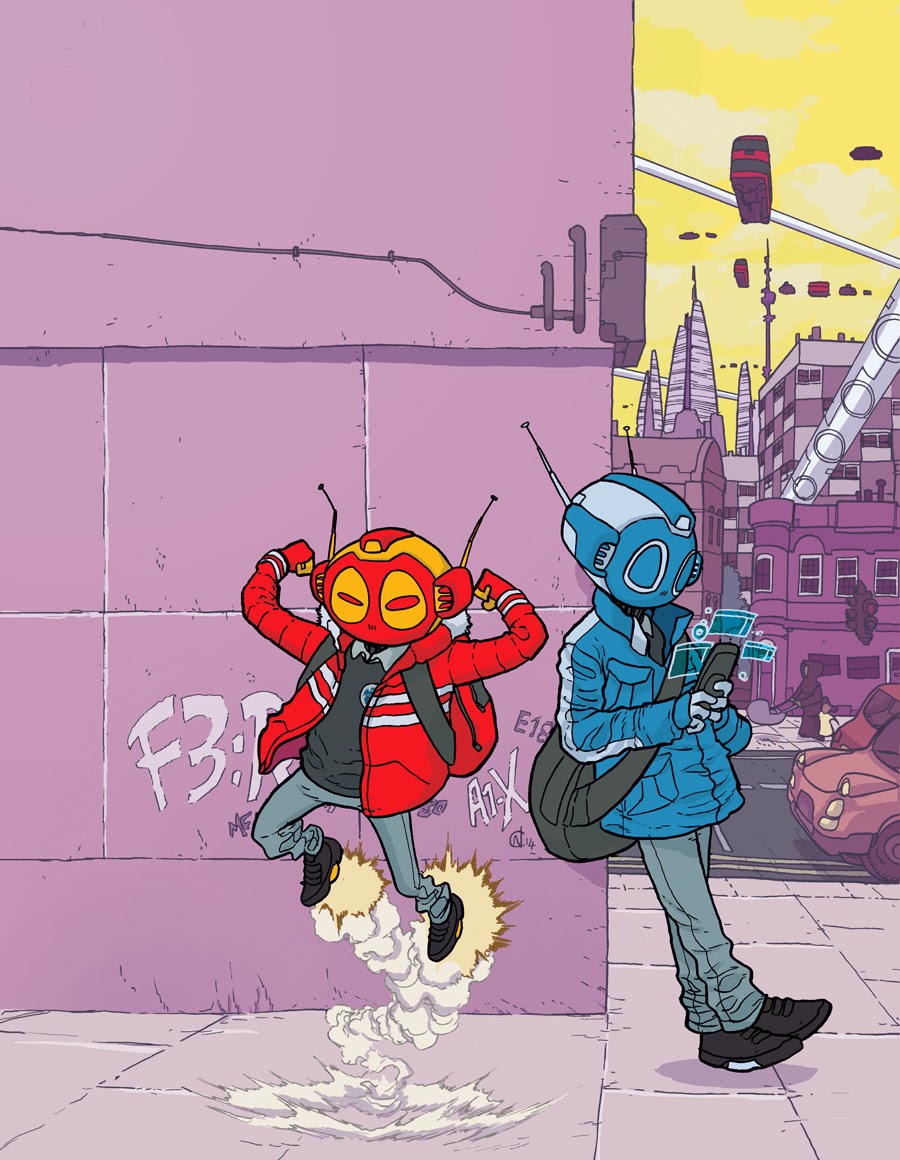 I'm really excited about this strip, I've got so many plans for it and am having huge amounts of fun. It concerns the adventures of Alex and Freddy, two kids who - well, they are robots? And they are brothers? It is all right there in the title? 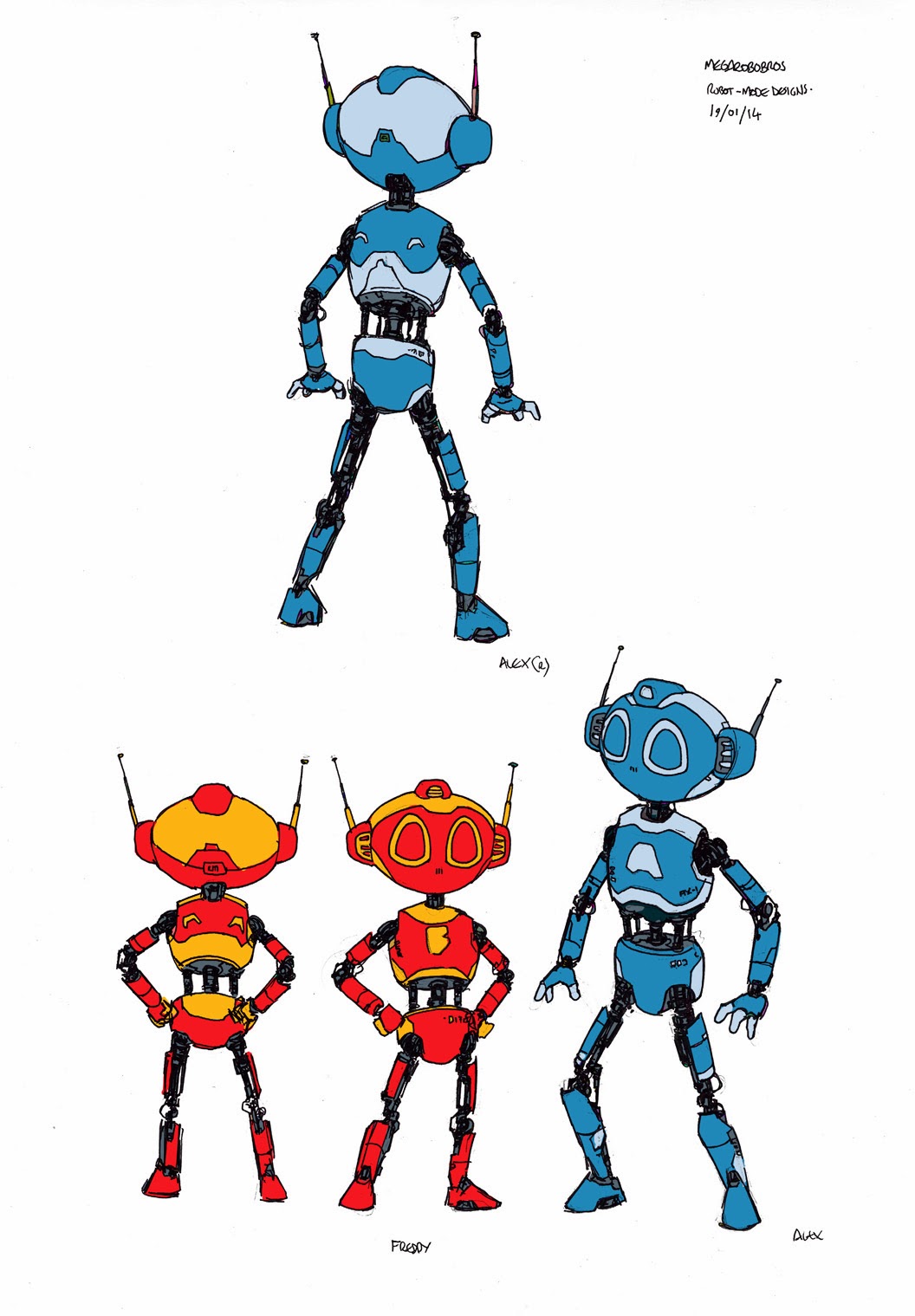 You can buy The Phoenix from these fine vendors, by subscription, or digitally on iPad. Please do so!

To celebrate this new venture, and because I said it on twitter before thinking better of it, I am having a small MEGA ROBO COMPETITION! Simply tweet (or facebook, or blog) a photo of your cat* reading this week's Phoenix, and win an original sketch of Alex and Freddy, the Mega Robo Bros themselves! And indeed, possibly your cat.*


*If you don't have a cat, dogs are allowed too.  And indeed goldfish. And indeed stick insects, zoo animals, or any variety of robot.

Here's a couple to start you off! 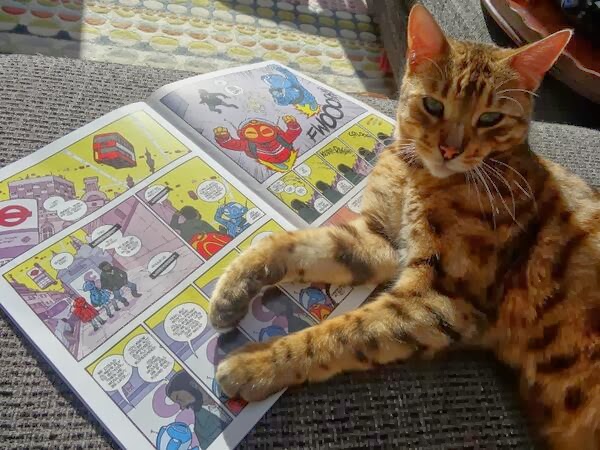 And an AWESOME CYBER DOG from @AlixCoughlin: 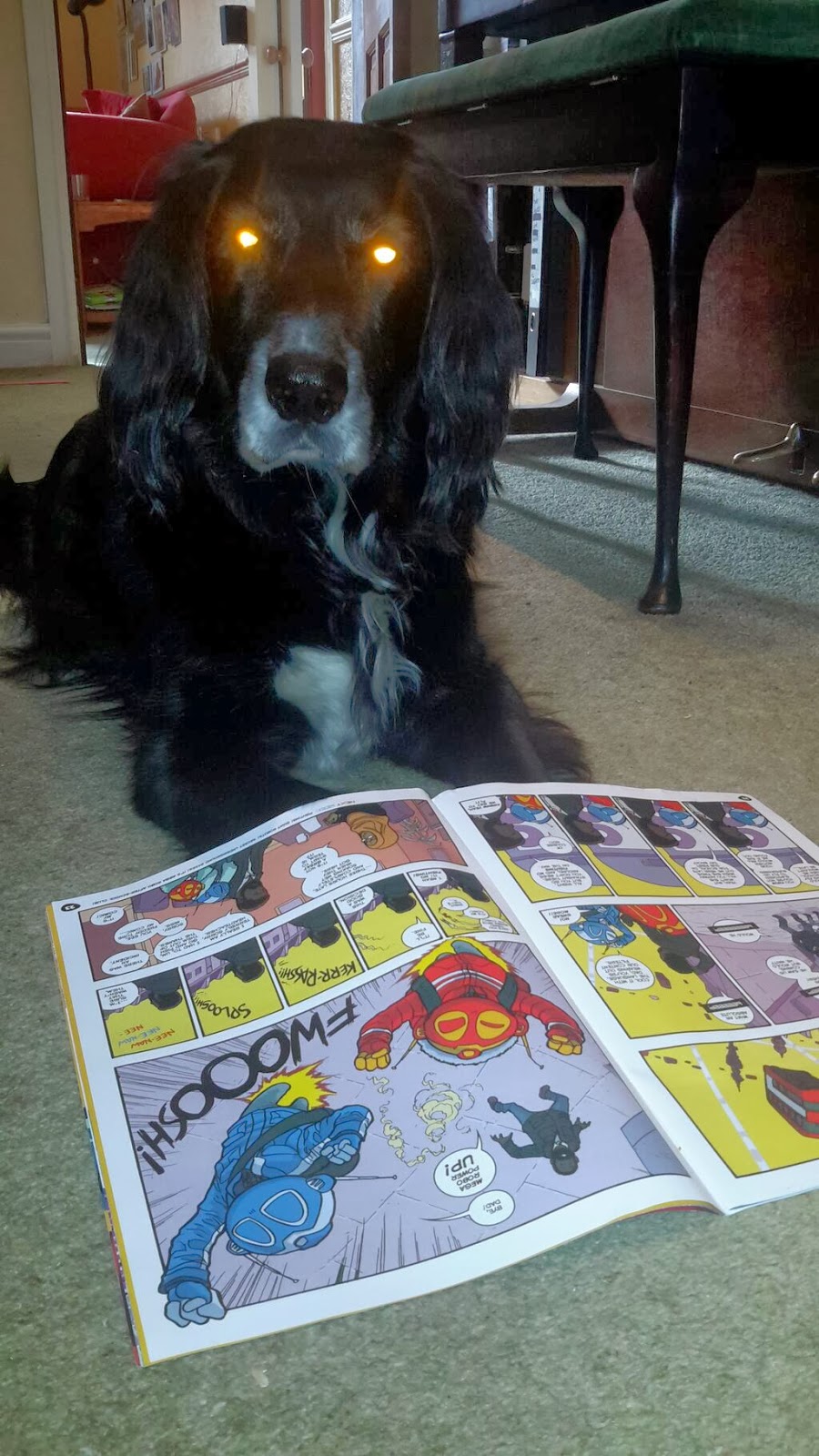 TERMS AND CONDITIONS:
Anyway, have a go! I will draw something cool, I promise. And check out Mega Robo Bros in the Phoenix, this week and indeed EVERY week until... you are all thoroughly sick of it?**

**NEVER GONNA HAPPEN. It has ROBOTS.