Hello! Because it has been a while I thought I would alert you to a couple of FUN NEW WAYS you can buy my comics! 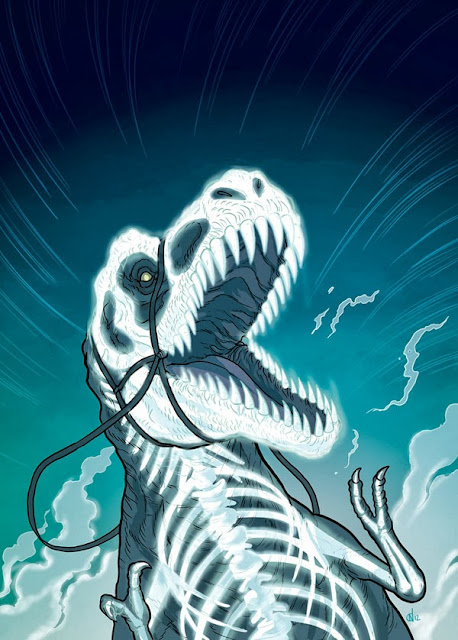 Firstly, Ghosts of Mathrak Chu - Dan and I's second Pirates of Pangaea adventure, a thoroughly ripping yarn involving GHOST PIRATE DINOSAURS - is available to purchase as a complete 4-issue bundle from The Phoenix Comic Shop. Please do go and have a look, it's one of my favourite things we've done so far. Look, here are is the ENTIRE FIRST EPISODE in all it's excitingly spooky glory to convince you. 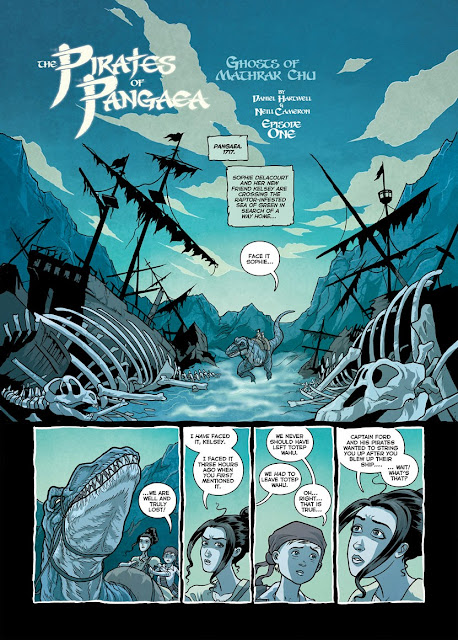 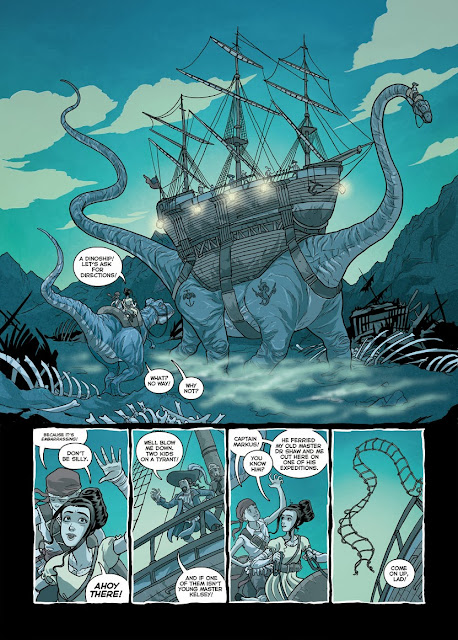 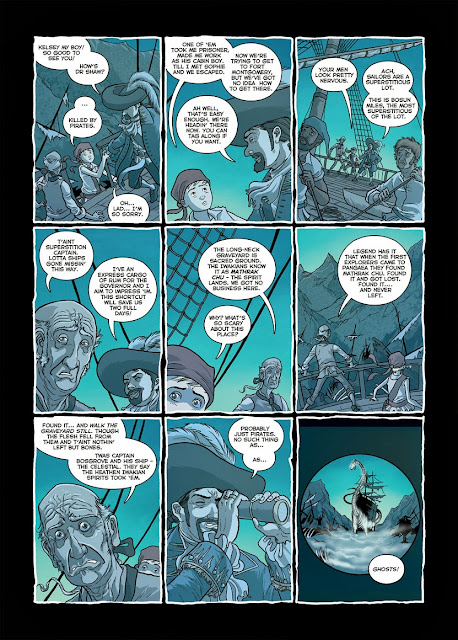 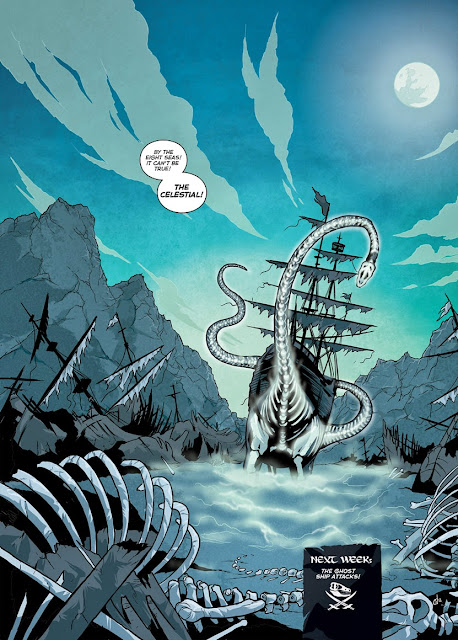 SECONDLY, those selfsame fine fellows at the Phoenix are also now stocking Mo-bot High in its nifty new paperback edition, so why not go and buy that too? Look, here is a preview to convince you.


Or hey, why not buy both! Make a day of it on your nice internet-shopping excursion.

Look, what can I say. The kid just had a birthday and I felt a pressing need to implore people to PLEASE BUY SOME COMICS! Thank you. You may go about your business now.

As long as you bought some comics.

I spent yesterday doing some really fun comics workshops at Boughton Monchelsea primary school in Kent - lovely school, great kids and teachers, and we made some very fun comics about depressed monster bunnies and evil cyborg farmers. GOOD TIMES. Anyway, on the way home I detoured across London to pop my head in at the studio of celebrated design firm Baxter & Bailey to check out their current exhibition as part of the London Design Festival; Sequential City. It's a great idea, showing original pages and finished works from a bunch of different cartoonists, all focusing on stories that feature the city of London itself.

Here's the man himself, Matt Baxter - who in addition to being one half of Baxter & Bailey (with the similarly marvellous Dom Bailey) is of course the designer and creator of the Phoenix comic's brilliant editorial characters, who give said periodical so much of its flavour and personality and general niftiness. 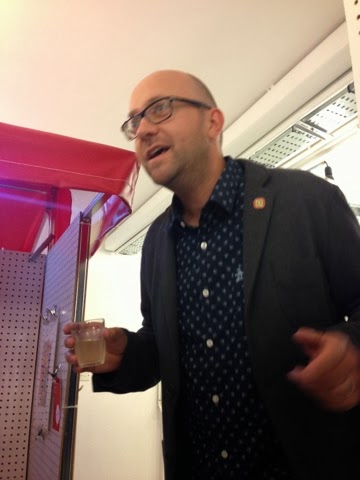 There's some great work on display - I took a few pictures which are in no way exhaustive but give a sample of the exhibition's delights. Here's a page of pencilled artwork from Freakangels by Paul Duffield, along with the finished version coloured by Kate Brown, showing a rather worse-for-wear Gherkin... 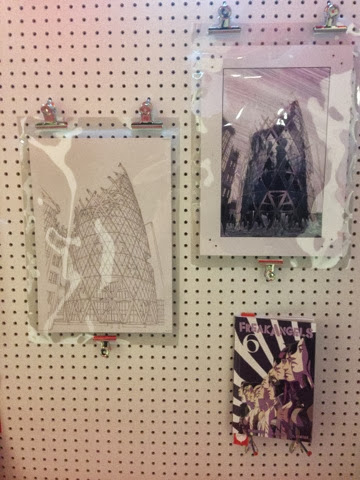 And here's a better view of Paul's slightly-terrifyingly-incredible pencils... 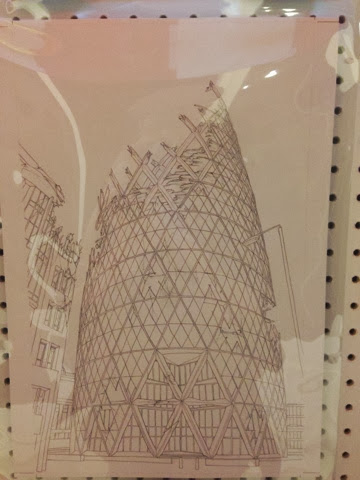 This was a real treat to see; a spread of Adam Murphy's original art from Corpse Talk, one of my favourite comics in the world, this one a double-page-spread showing the Great Fire of London: 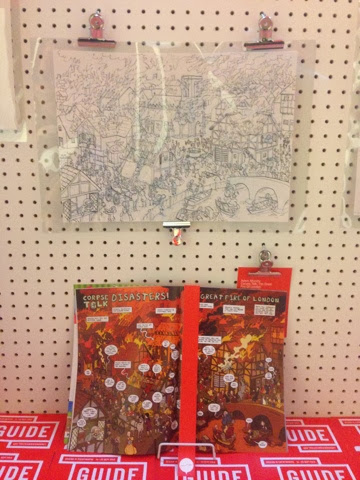 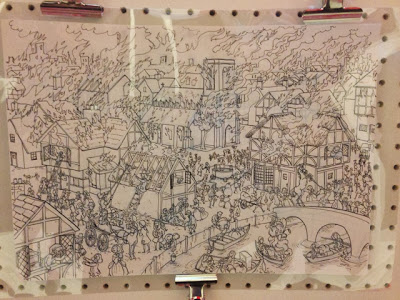 And that was barely the start of it, there was also great work on display from Woodrow Phoenix, Sarah McIntyre, Bryan Talbot, Rian Hughes, Robert Ball, Patrice Aggs, Faz Choudhury, Hannah Berry and more - and look, here's one more pic, showing a page of my art from my old small-press comic Bulldog: Empire (remember that?), hanging next to possibly my single favourite page - which is saying something - of Garen Ewing's The Rainbow Orchid (you know the one, it's the one with the Natural History Museum. It is jaw-droppingly wonderful.) 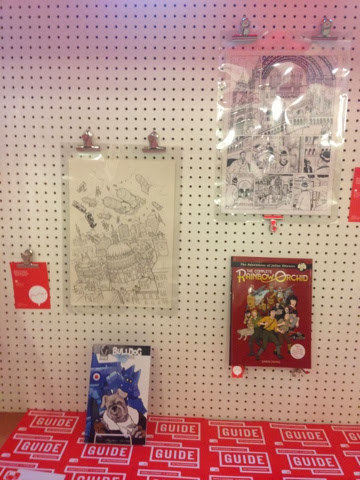 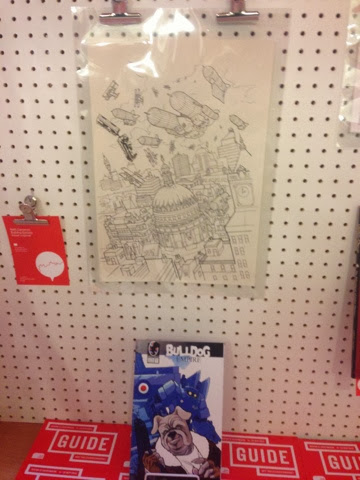 What was lovely about the party was that many of the aforementioned artists had managed to come along, both to hang out and chat and catch up (and drink free beer and gossip about comics OBVIOUSLY), but also to collaborate on a Giant Jam Comic For The Ages! Mr Baxter himself kicked things off... 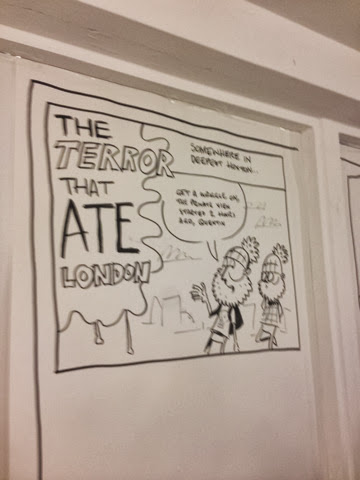 And then the increasingly-surreal baton was handed off to, in order, Patrice Aggs... 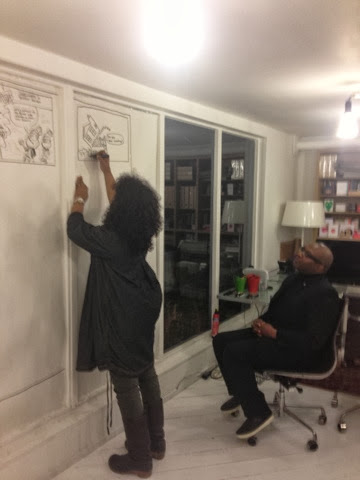 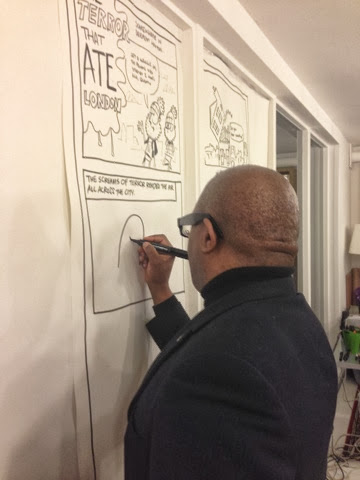 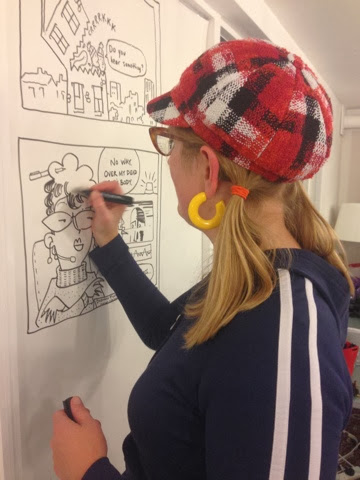 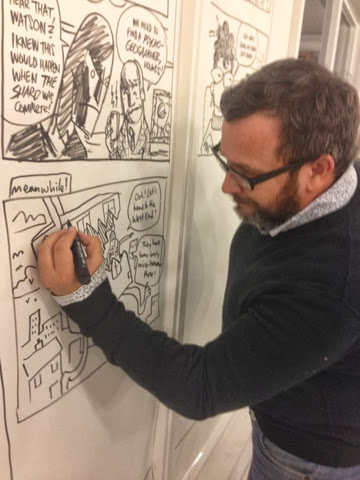 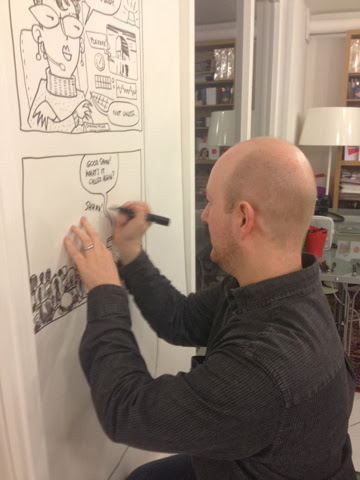 ...and then myself, culminating in a climactic vomit-packed COLLABORATION between Rian Hughes and Robert M Ball! Which is not a thing I dare say anyone got out of bed that day expecting to see. 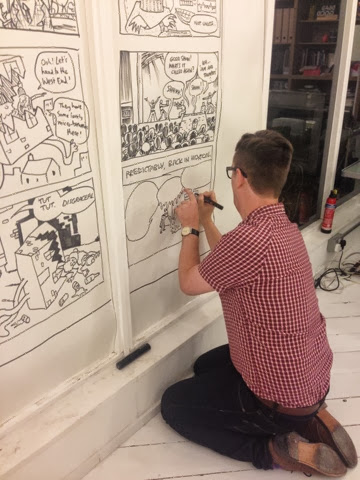 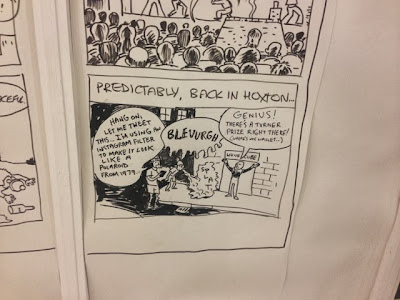 And here is the finished strip: I can't promise it makes any sense but look, for my part, I had a cold and there was beer and hey, it sort of comes together in the end? Right? 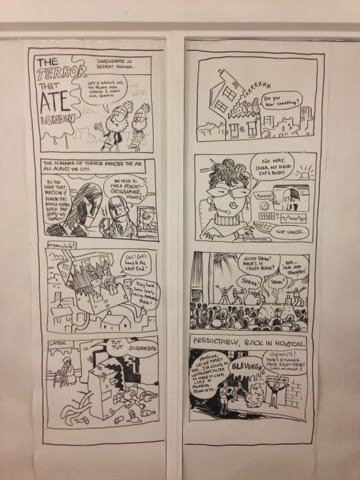 Anyway, a hugely fun evening and really great to catch up with everyone. The exhibition is on for a few more days, you can find the details here, and you can watch some great videos produced for the exhibition by Rob Chan and featuring Gary, Sarah, Woodrow and Robert talking about their work.

AND, if you are in London and have kids, top tip: Matt is going to be going a comics workshop in the studio THIS SATURDAY at 11am and there are a couple of places left, so if you're quick and e-mail studio@baxterandbailey.co.uk you might just be able to get in there! And you totally should, I feel reasonably confident in predicting it'll be a hugely fun event. Huge thanks to Matt and Dom for the invite, and for hosting such a singularly nifty event.
Posted by Neill at 13:39 No comments: