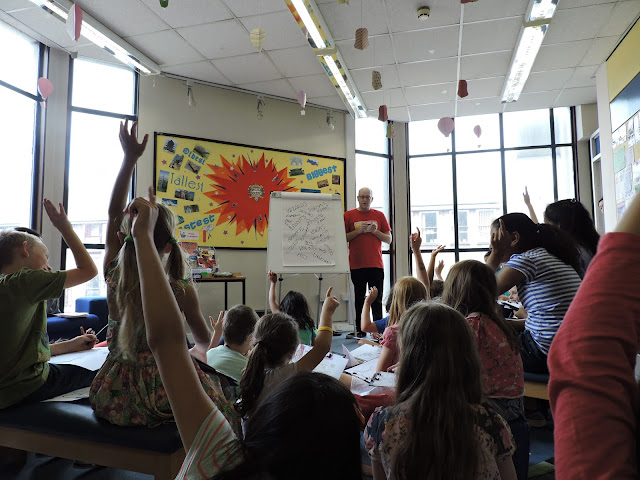 Hands up if you want to make awesome comics.

Regular readers of this blog will know I do a lot of comics workshops at schools, libraries, literary festivals and such, all over the place really. However, I almost never manage to get any pictures from such events, due to the fact that I always have my hands full of Sharpies and anyway am generally a bit busy drawing giant mutant Cornish pasties, or whatever it may be that day. Anyway, I recently did a session at Oxford Central Library, to help launch the Summer Reading Challenge there, and to celebrate The Pirates of Pangaea's inclusion in said scheme. A great fun time was had, and some of the library's marvellous staff managed to snap a few pics, so I thought I'd share them here! 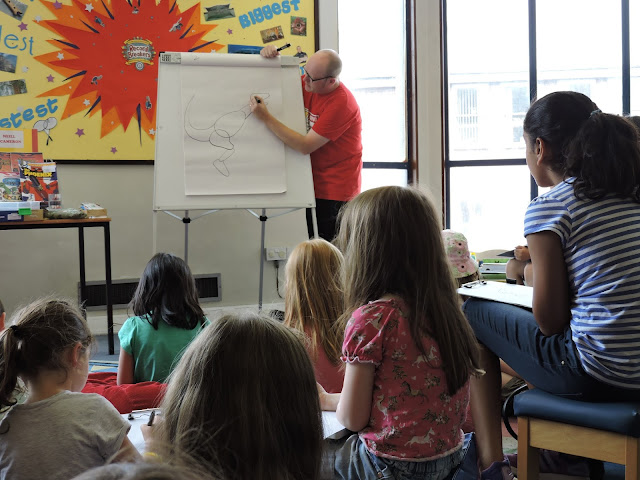 Who wants to learn to draw T-Rexes? 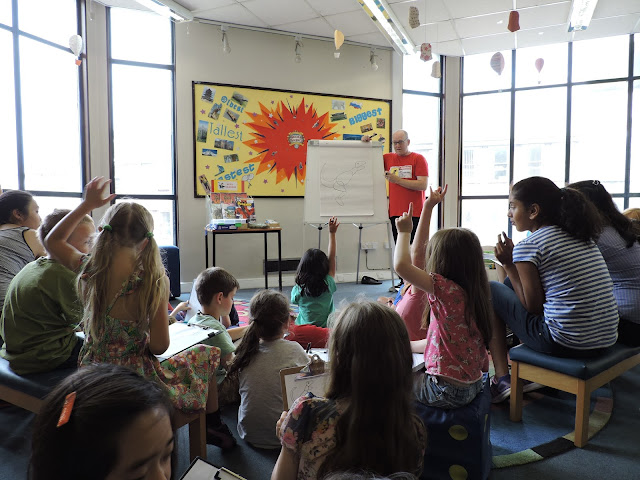 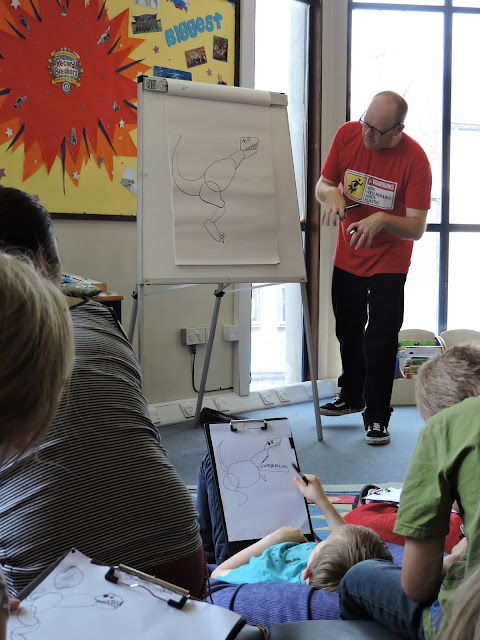 That is me demonstrating Tyrannosaur's underdeveloped arms? I think? 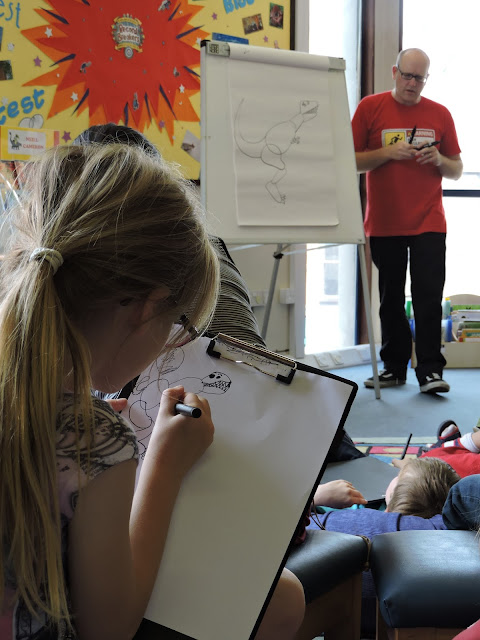 Teaching important lessons to the youth.

Dinosaurs were drawn, records broken, and a good time had by all. (I hope?) Many thanks to Joanna Morris and all at the library for having me, and for passing on these photos!

Lots more events upcoming! Next weekend I'll be at Camp Bestival for three solid days of comics workshops with Gary Northfield and the Phoenix comic gang. And tomorrow I'll be spending the day in the Illustrator Zoo at the Story Museum, drawing comics while members of the public come along and watch the process and ask questions and possibly join in? Come along, it should be fun! And keep an eye on my Upcoming Events page for more!

Email ThisBlogThis!Share to TwitterShare to FacebookShare to Pinterest
Labels: How To Make (Awesome) Comics, workshops 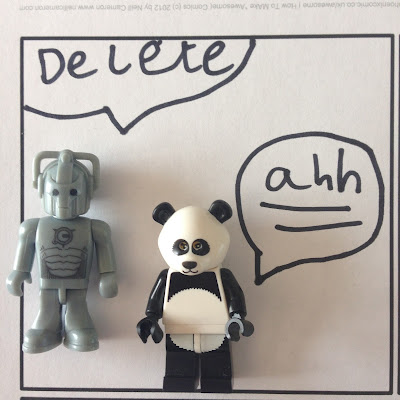 Summer holidays start today! For families across the land the appalling prospect looms of suddenly having a house filled with children alternately complaining that they don't know what to do, or making you feel guilty by staring at minecraft-filled screens for long, endless hours. What CAN they do? What is a fun, creative activity to keep them occupied, or at least when it's too rainy to go out and kick rocks up and down the street?

Why COMICS of course!

(You probably knew I was going to say that.)

Anyway, I've been meaning to blog these for a while - a fun comics-making activity that everyone can try! For one session of my Saturday Morning Comics Club at the Story Museum I thought we'd try mixing things up a bit and making some photo comics using whatever toys and props I had available. I've been alternately calling these 'InstaComics' or 'Semi-Fumetti', the latter being more fun to say. They're pretty simple to make, and are kind of a halfway house between comics and stop-motion animation, the process being: 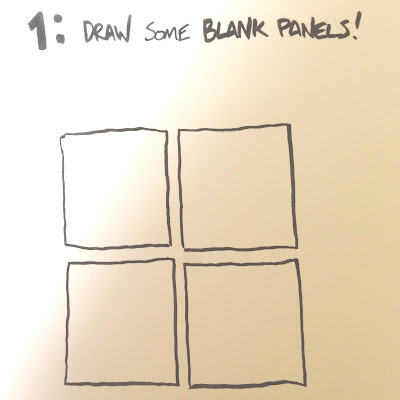 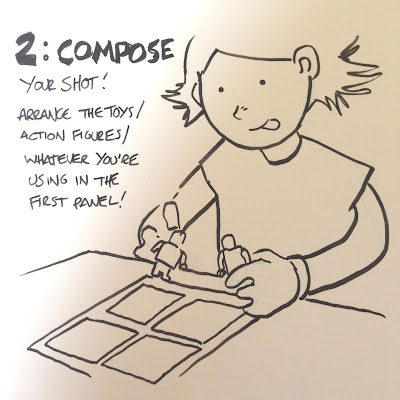 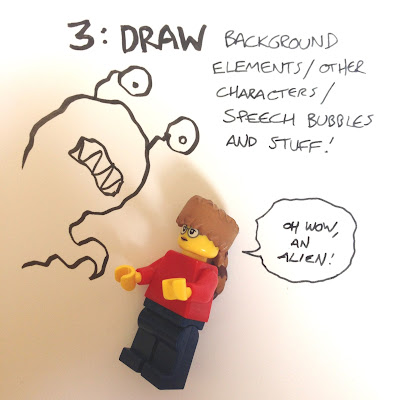 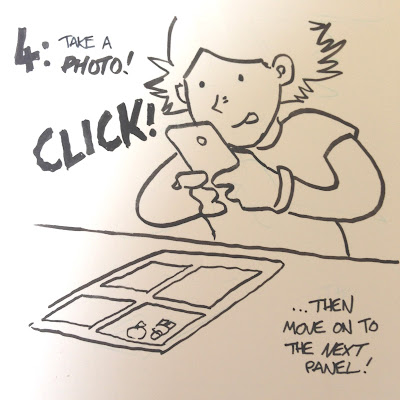 It's that simple! And if you then quickly upload the pictures to twitter, or as a tumblr photoset or such, you get a really nice instant-completion sense, of making something and putting it out into the real world within minutes. Instant webcomics! 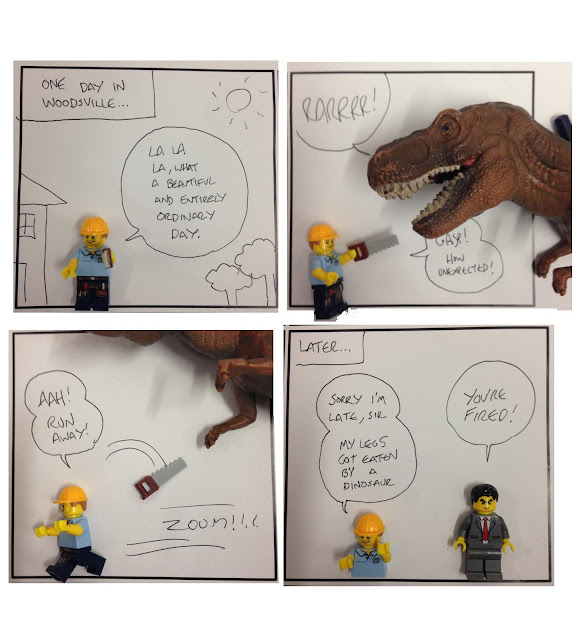 So simple that a child could do it, and indeed they have. Here are some results from my excellent and most talented pupils at comics club; first an amazing multidimensional experiment by Ruari... 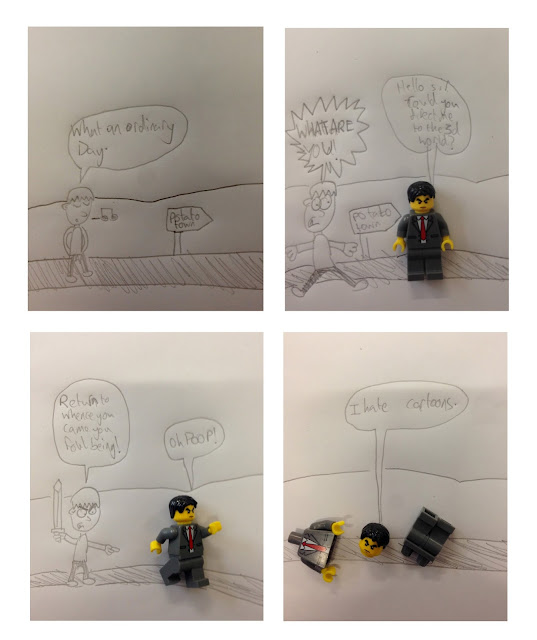 No lego? No problem! Here's an excellent effort by Eliza, using a CORK instead. 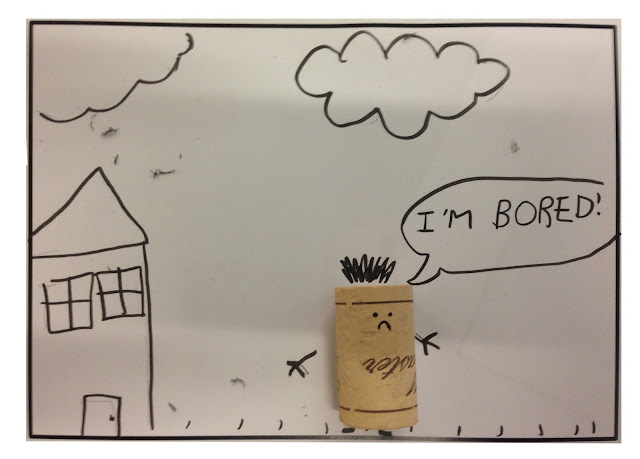 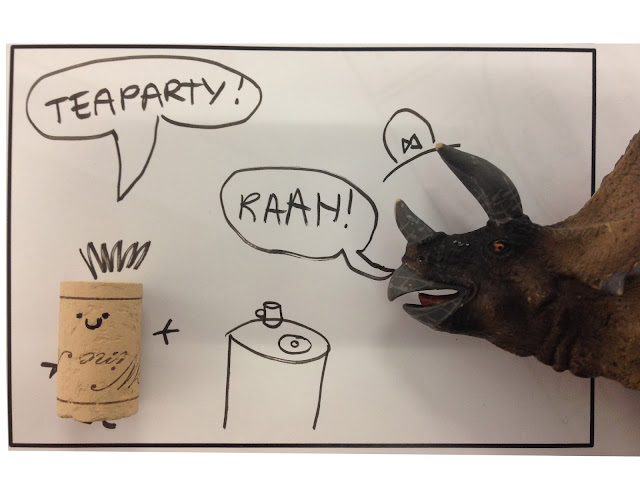 And one by Hector which is possibly my favourite LUKE CAGE: POWER MAN comic of all time: 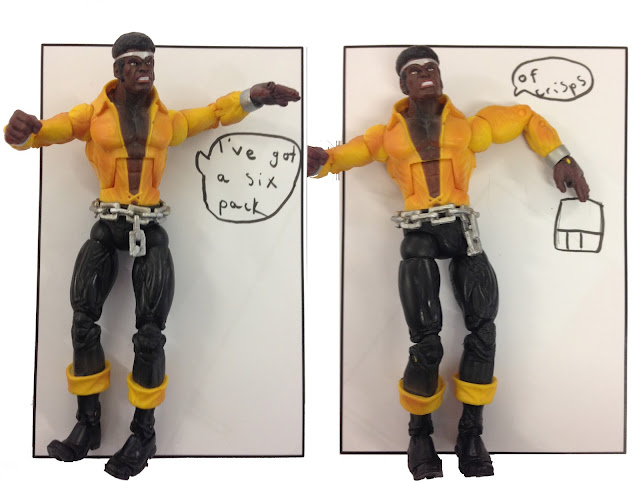 ...and you can find lots more examples on the @ComicsClubSM twitter feed! I mean, seriously, lots.

I found it a really fascinating exercise, which both levelled the playing field in terms of drawing ability and also encouraged the kids to think about panel composition and storytelling in completely different ways. I would particularly recommend this as an exercise to anyone with kids who are determined Can't Draw Won't Draw-ers, as it kind of sucks you in to drawing a bit of background here, a few speed lines there, and before you know it, hey, you're making comics so I guess you can draw after all? Also particularly recommended to kids obsessed with Lego, or Minecraft, or Frozen, or Star Wars, because it's a way of playing with your favourite toys and making up stories in those worlds and with those characters even if you haven't quite got the hang of drawing all the webs on spider-man's costume or whatever. 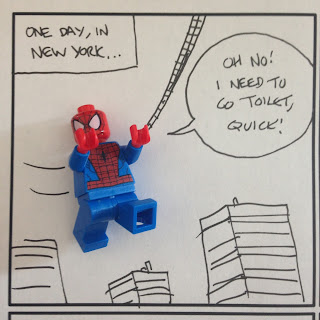 Look, you can even have a go at the CLASSICS: 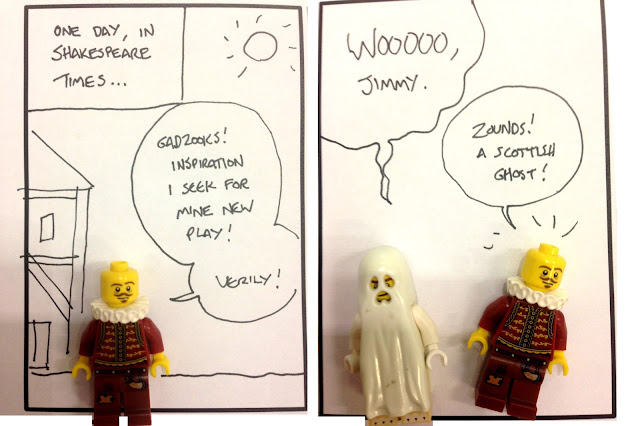 Anyway, have a go! See what you come up with over the summer, and please do feel free to tweet at me on @neillcameron or @ComicsClubSM with any results, I'd love to see them.

And if the kids need something else to do after that, move them onto the ADVANCED CLASS - make and publish their own comic by the time they go back to school! (With today's ease of access to reprographic technology this is, honestly, a way more achievable goal than it may possibly seem at first glance. Look, here are a few we made earlier! 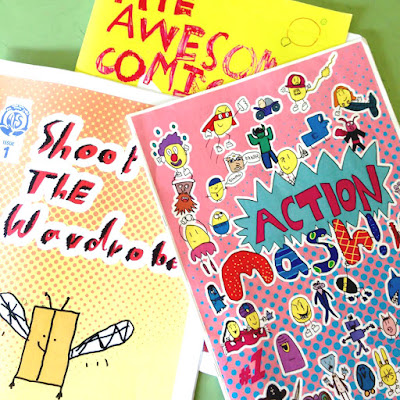 For lots of further activities and ideas and pointers on how to make awesome comics, HEY! I actually made a whole book about this stuff? 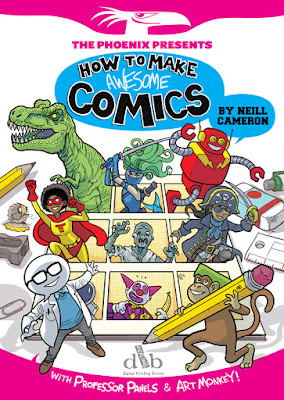 Available from good bookshops and libraries nationwide! And do check out the How To Make Awesome Comics page on my website for more info and examples, and lots more activities and resources to use in making your own comics!

Email ThisBlogThis!Share to TwitterShare to FacebookShare to Pinterest
Labels: comics and literacy, comics club, How To Make (Awesome) Comics, instacomics 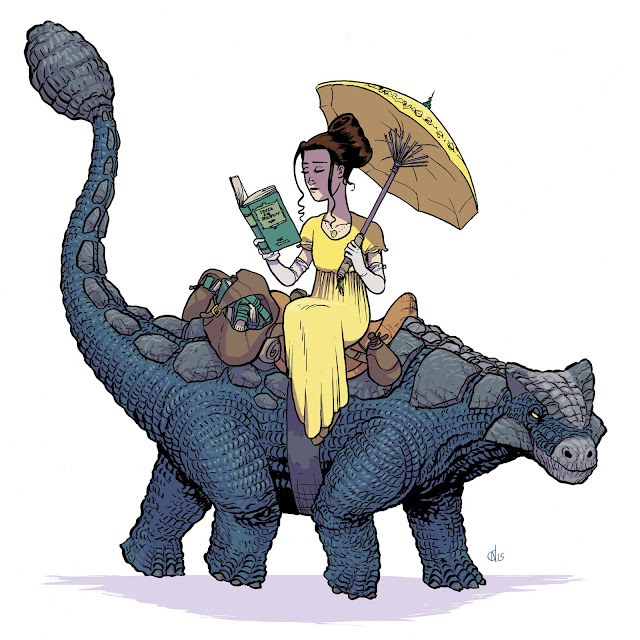 I'm delighted to report that The Pirates of Pangaea has been included in the list of titles for this year's Summer Reading Challenge! Hot-foot it to your local library and spend your summer holiday in a hazy sun-drenched land of bloodthirsty pirates and magnificent prehistoric giants.

To kick things off I'll be doing a free Piratey Dinosaury Comics Workshop at our local library, specifically:

It's a FREE event, so come along and sign up for the reading challenge, draw some dinosaurs, and help set a new world record for awesomeness!
Posted by Neill at 08:46 No comments: