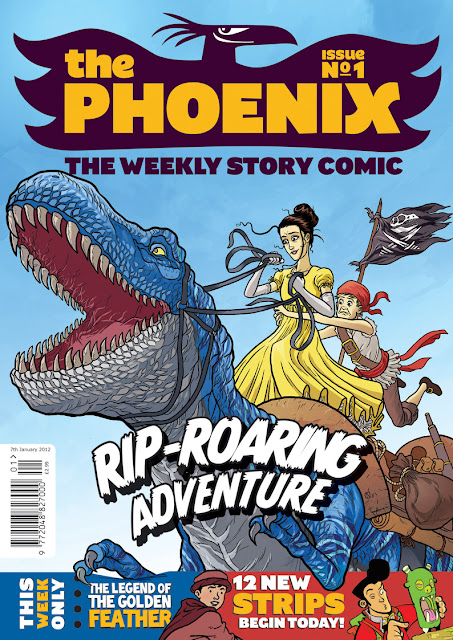 Gosh, has it really been a year?

Well, it seems like just yesterday we were celebrating the launch of the Phoenix and the start of Pirates of Pangaea, and... no wait a minute, it doesn't seem like yesterday, it seems like an entire year ago. Because it was! Yes, here we are at the beginning of The Phoenix: Year Two, with this week's issue #53 heralding not only the return of Sophie, Kelsey and Cornflower in m'colleague Dan and I's latest piratey dinosaury magnum opus, Escape From Razorbeak Mountain, but also - and possibly even more excitingly - the launch of a brand new iPad edition of the comic! 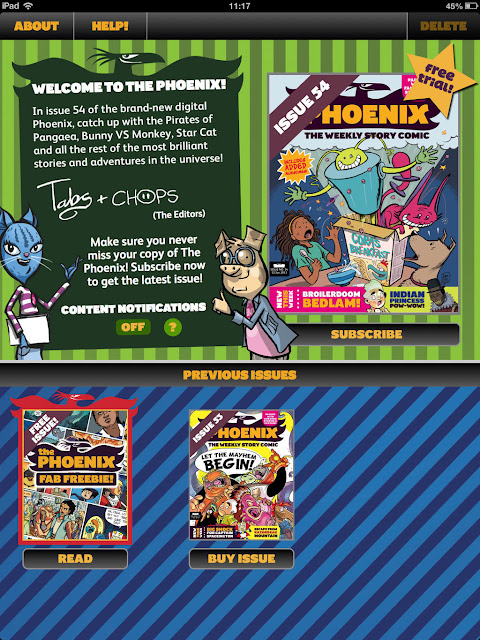 I've been looking forward to this for ages, and I'm super excited to see it all go live. Distribution and geography are obviously huge challenges for a small company like the Phoenix, and I'm really optimistic that the iPad edition will allow lots of new readers, all over the world, who'd previously been unable to get access to the comic (without fairly herculean efforts / dedication / substantial shipping fees, anyway) to join in the fun. It helps that the Phoenix app - developed by Panel Nine and available through Apple's Newsstand - really is a great digital comics-reading experience. It's as smooth and intuitive as you could hope, easily standing up against something like ComiXology's interface but I'd argue even better, due to some of the top-level navigation features (index / ability to 'favourite' strips) which work wonderfully in the context of a children's anthology comic. 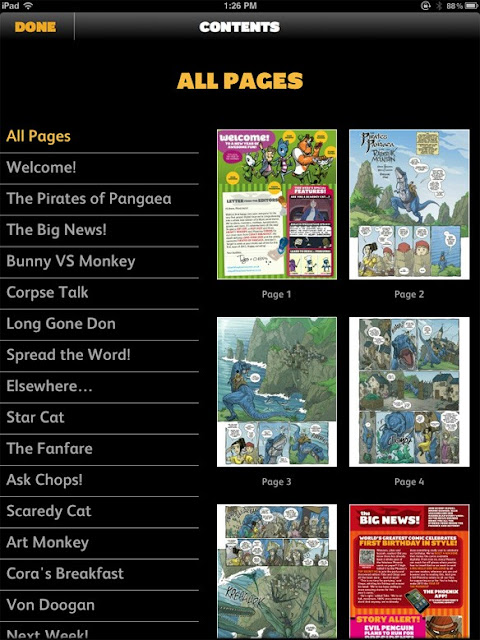 The index page. Screenshots via Comics Alliance because, um, I have no idea how to take screenshots on my iPad.

Also, the 'Something Cool' pop-up bonus content, designed specifically for the app, allows for story recaps / character profiles /  development art, and all kinds of cool extra bits n' bobs you'll see popping up as the weeks and months progress. Then there's the little touches, like the fact the editorial pages have all been designed / reformatted to suit the iPad edition, and the fact that web, e-mail and twitter links etc. work direct from the app. You can now e-mail Adam Murphy your suggestions for what corpse he should dig up next, or have a quick go on Professor Panels' Awesome-o-Tron, direct from reading the comic! It's all indicative of the level of care and attention to detail that are being put into it, by both the guys at Phoenix HQ and over at Panel Nine, and it really makes the difference. 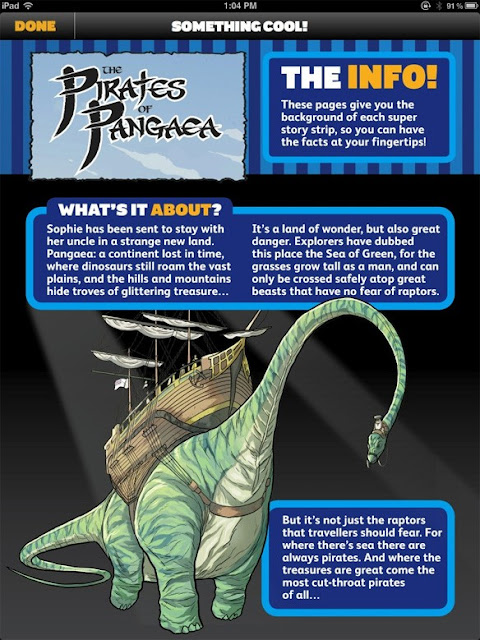 Why yes that IS something cool, I agree.

It's pretty good, is my point. If you've got an iPad, go download the app. It is free and you get a free comic to read, what's to lose? And also, the app is launching with what I can frankly only describe as an INSANELY good one-week launch offer, whereby you can get SIX MONTHS - yes, SIX ENTIRE MONTHS of the weekly comic for just £9.99. That'll take you through the entire 5-month epic run of Pirates of Pangaea book 2, for example, and out into whatever lies beyond. As well as giving you approximately 425,780 pages of other awesome comics to read.

It's a pretty good deal, is my point. Anyway, initial reaction to the app seems to be really positive - here are some write-ups from Comics Alliance, Paul Gravett, Down the Tubes, George Shiers - and on launch day the app made it straight to #1 on the Children's Magazines chart on iTunes. 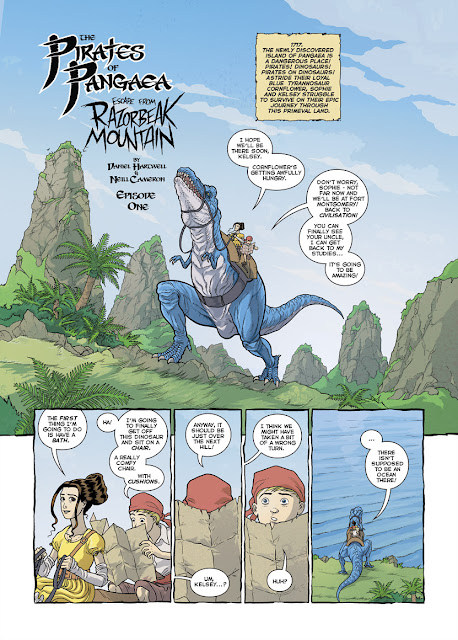 Anyway, I hope people give it a try. I think it's a great thing, but I'm really glad that it exists as an alternative / supplement to the print edition, rather than replacing it. (My son prefers the physical comic, and I'm not sure anything can ever quite replicate the joy of getting that brilliantly hefty, colourful envelope thudding through the postbox every Friday.) Regardless, whichever way you choose to read, I hope you enjoy our new run of pirates. A few people have asked whether Book 1 is also available digitally, and while this is a 'not yet' (you can track down print copies of back issues but that's about it currently), Dan and I have worked pretty hard to make this a very clean start to the new adventure. There are a couple of kids and they have a dinosaur and, pretty much, that's all you need to know to get started. Much fun awaits. Hop to it!