Loyal readers of this blog will be all too familiar by now with my nerdiness for Doctor Who, and so will understand how excited I was recently when I got the chance to provide some illustrations for the Doctor Who Storybook 2010 (available now from all good bookshops). I've just updated my website with a couple of them, why not go and have a look? They accompanied the story Bennelong Point by Keith Temple, in which Doctor Who goes to Australia, dodges evil alien Kangaroos and generally has a much more interesting time crossing the Nullarbor on the Indian Pacific railway than I ever did. (3 days - 3 DAYS - of blank featureless desert views, bad food, and not an evil alien Kangaroo as far as the eye could see.)

But I digress. One thing I've certainly learned from doing these illustrations is that David Tennant is a surprisingly difficult fellow to draw. (And indeed, looking back over some previous blog posts in preparing this one, just how much some of my attempts to do so have sucked.) I'm not beating myself up here - if you look at a lot of illustrations / comics art of the chap (and I have) you'll see that it's all too easy to fall into the trap of either giving him a blandly generic 'handsome' face, or alternately just looking over-referenced to the point where you wonder why they didn't just use a photo.

It's a hard balancing act to pull off, and by no means do I mean to imply that I think I got it right here. The best example, for my money, is the work of Rob Davis, who regularly draws stuff for Doctor Who Magazine and who provided, along with Ian Culbard, the absolutely gorgeous comic strip for the 2010 storybook. One of his recent strips in particular, 'The Deep Hereafter' really struck me with how he managed to draw a David Tennant Doctor who looked unmistakeably like David Tennant, but with an admirably fluid and lively cartooning style that works perfectly in comics. And not only that, but made it look easy.

Which is, you know, kind of what you want.
Posted by Neill at 15:36 No comments:

Email ThisBlogThis!Share to TwitterShare to FacebookShare to Pinterest
Labels: doctor who

Self-Portrait of the Artist as a Young Gorilla 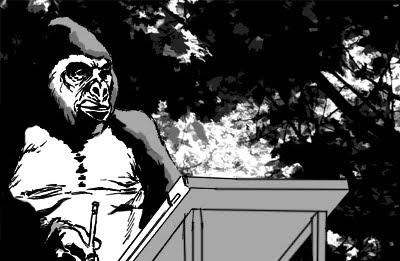 Email ThisBlogThis!Share to TwitterShare to FacebookShare to Pinterest
Labels: random

Hooray, it's over! All sketches done, all posters posted! The final batch were sent on Saturday (20 September) - they're shipping worldwide via airmail and should take no more than 5 days, so hopefully everyone should have their posters soon. Apologies again for it taking a while, but they're all done now. It turned out to be rather more of an epic undertaking than I'd perhaps envisaged, but y'know. Lessons learned!

I twitpic-ed a bunch of the sketches as I went along (as and when I could be bothered), here are a few of them...

Anyway, huge thanks again to everyone who ordered one. I really hope I got everyone's sketches right. I was double-checking everything as I went along but, statistically speaking, probably screwed something up. Anyway, I hope you enjoy them!

Yes, look, its some more A-Z Poster doodles! About halfway through now and I've got another big stack to mail out tomorrow. Apologies to anyone who's waiting on theirs but I think getting through them all is going to stretch into next week. I forget that even relatively simple things kind of add up when you have to do them 250 times. Anyway, I promise I am sketching away as fast as my increasingly-cramping-up little hand can manage. Look, PROOF! 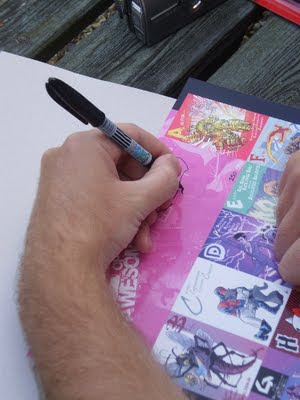 ...so I would estimate having all orders shipped my mid-to-end of next week. I'm going to carry on posting these status updates here, partly to keep people posted and partly cause I quite like making those little montage-y images. 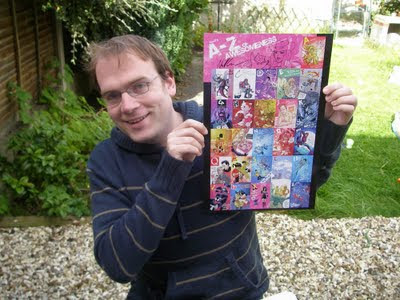 These are a select few of the sketches I've been doing on A-Z posters! Thought I'd give a quick update here. Huge thanks to everyone who ordered one, I'm working my way through all the sketches as fast as I can, and I'm hoping to get them all shipped over the next week. I'm sending them in batches of 50 or so - the first lot went on Saturday, and I'm aiming to send another batch every couple of days this week. They're being sent airmail around the world, which should take no more than 5 days to arrive, so hopefully you all should have your alphabetical postery goodness in your hands soon!

After an initial rush of interest that burned through my website's bandwidth allowance overnight AGAIN, things have slowed down to slightly saner levels again. I actually have about 20 of the posters left, so if you'd like to get one, head over to the shop! (Don't worry, if they've run out you won't be able to order one.)
Posted by Neill at 16:02 2 comments: