A problem I hear a lot from teachers, librarians and parents - and I think it's getting better, but definitely still there - is of wanting to give comics to their kids but not knowing where to start: which titles are out there, which are suitable, which are good. To try and address this, about a year ago I made a list of Comics For 6-Year-Olds based completely subjectively on the particular favourites of one particular 6-Year-Old. Anyway, pretty much all the titles listed there are still much-loved round these parts, but since said 6-Year-Old is now a 7-Year-Old (and since the last year has seen the release of lots of REALLY AMAZING new children's comics) it seemed a sensible time to bring you some recommendations of... COMICS FOR 7-YEAR-OLDS! 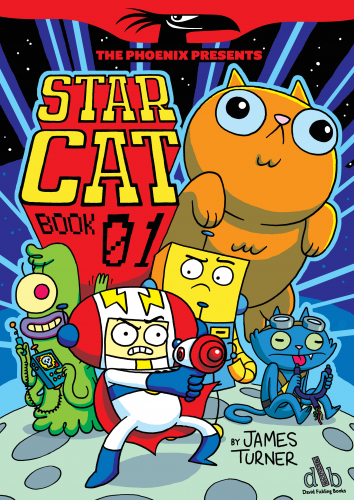 When we were up doing workshops at the Edinburgh Book Festival I grabbed the opportunity to, basically, completely blag an advance copy of James Turner's collected Star Cat book, as I had a sneaking the suspicion that the boy would rather enjoy it. And, wow, my god. I handed it over and that was that, basically we didn't hear a peep out of him for the rest of the day. Or indeed the next day. To the point where I was actually getting a little worried.

And that's the thing, Turner really gives you a gift here, an incredibly rich and densely-packed world to get lost in, with jokes piled upon jokes piled upon jokes, coming at you from all angles and across multiple dimensions at once. There's wordplay and cleverness and mind-bending concepts, but also sheer utter ridiculousness and robots and spaceships and vampires and, basically, just everything that is great in life. 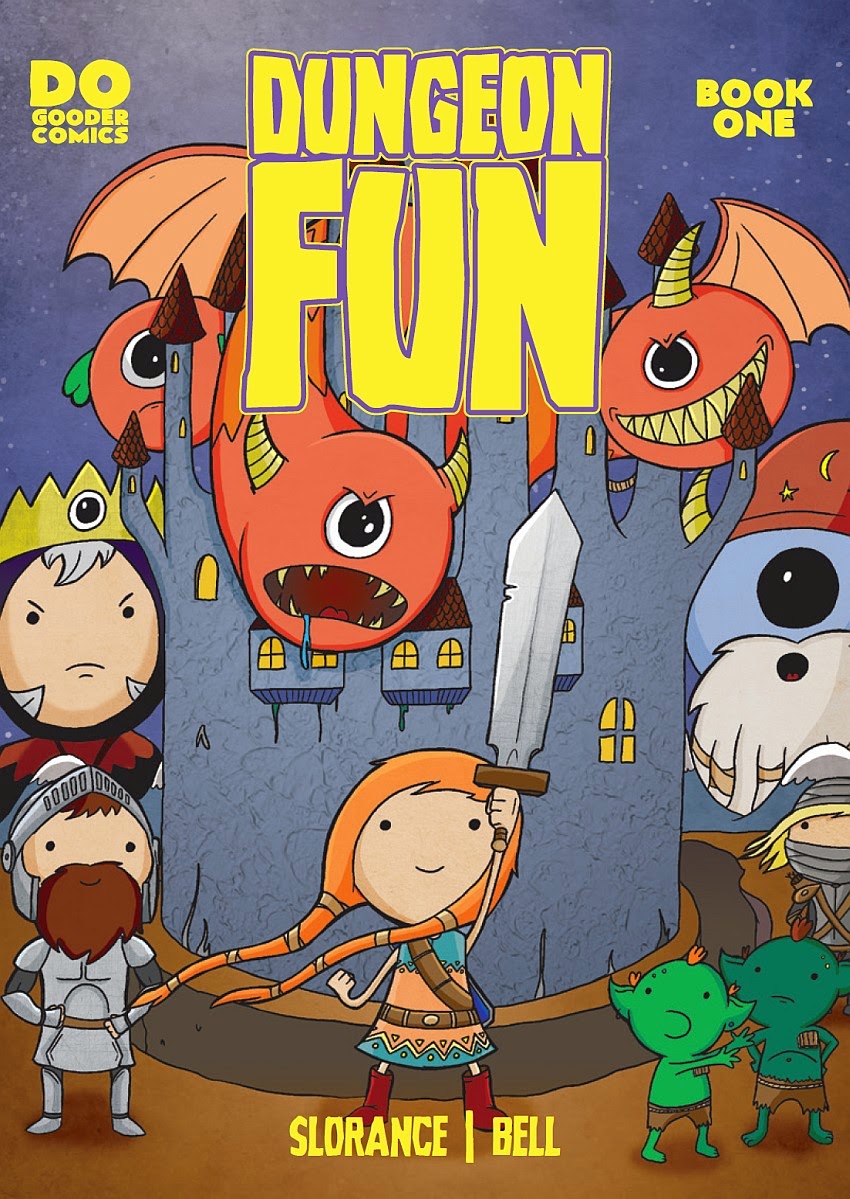 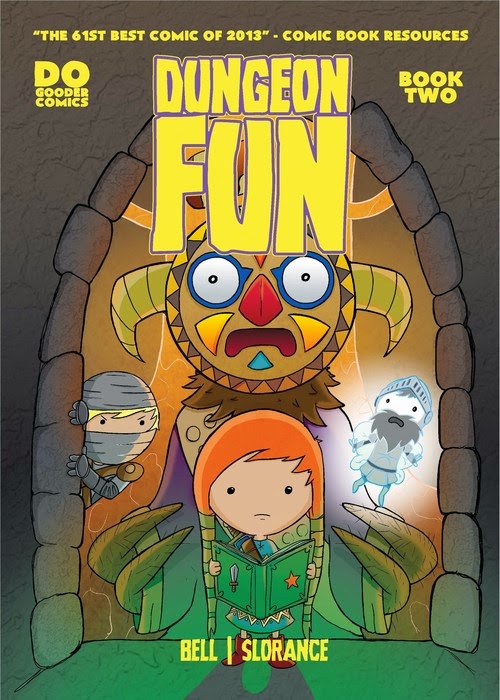 I touched above on a reason I love some of these particular comics so much, which is the sheer amount of UNINTERRUPTED FREE TIME they have granted me. That's the huge, towering difference of the last year - when I made last year's list, they were all comics that we read together - which was wonderful and I wouldn't miss it for the world and we still do plenty of - but this year we're at the point where the boy is perfectly happy just grabbing one of these comics and reading it on his own. Like, for hours.

And seriously, this went on for days.

If I seem a bit evangelical these days about the power comics have to engage kids with reading: perhaps you can start to see why. 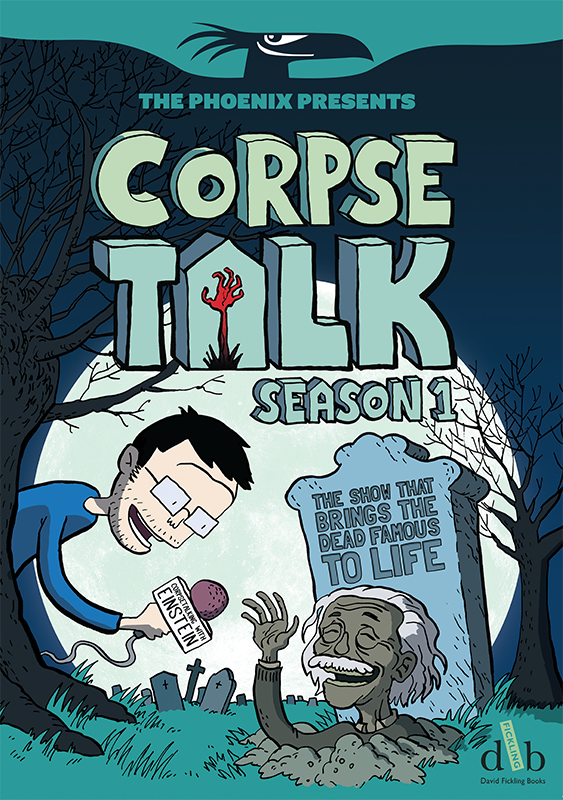 Speaking of engaging kids with reading, let us turn to Corpse Talk, Adam Murphy's brilliantly funny and richly informative collection of historical undead comic strip interviews. Or, as I will perhaps always think of it: "the comic that kept the boy quiet from Lancaster until well past Gretna Green". This is another wonderfully dense book, full of countless treasures, letting developing readers spend hours lost in beautifully-illustrated tales of Emmeline Pankhurst, Genghis Khan and William Wallace. (They pulled out his intestines on a stick and roasted them in front of him, you know. As far as my son is concerned this is the GREATEST THING THAT EVER HAPPENED.) 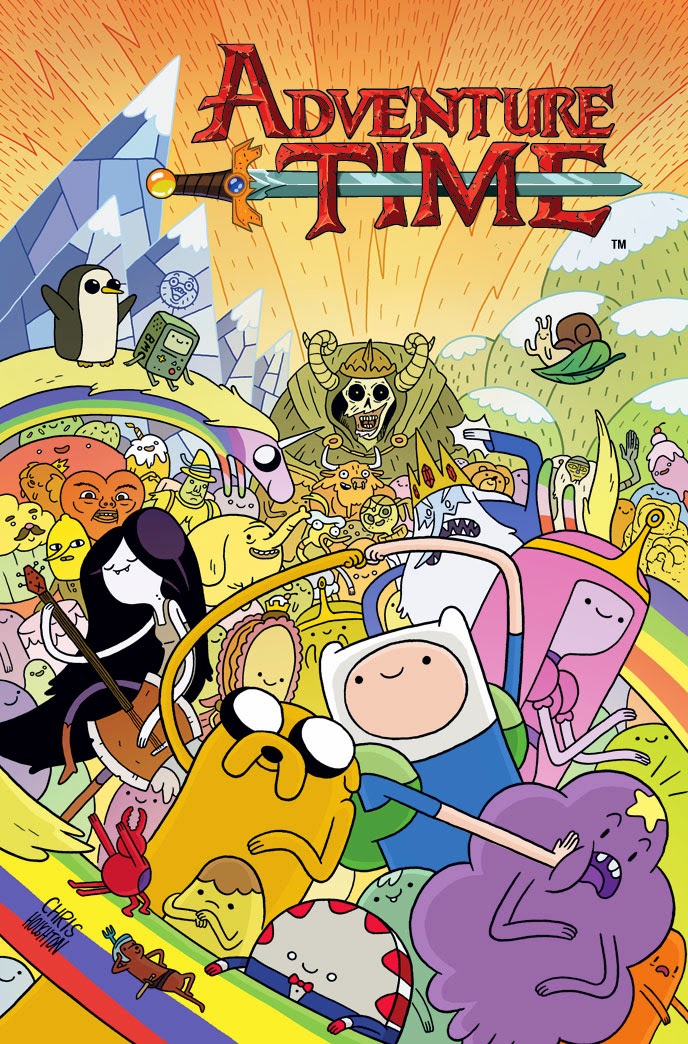 I won't go on too much about this one, as the information that 'kids like Adventure Time' is perhaps not particularly startling to anyone. I do think it's interesting that the couple of times I've tried the TV show out on the boy it's pretty much left him completely cold, but he really enjoyed the comic. As well he might! It's very funny, and beautfully illustrated. (It feels glacially, excruciatingly paced to me, but that may just be my years at the coalface of 3-page weekly episodes talking, and I'll grant you that while the journey may be bafflingly long, it's EXTREMELY ENTERTAINING along the way.) 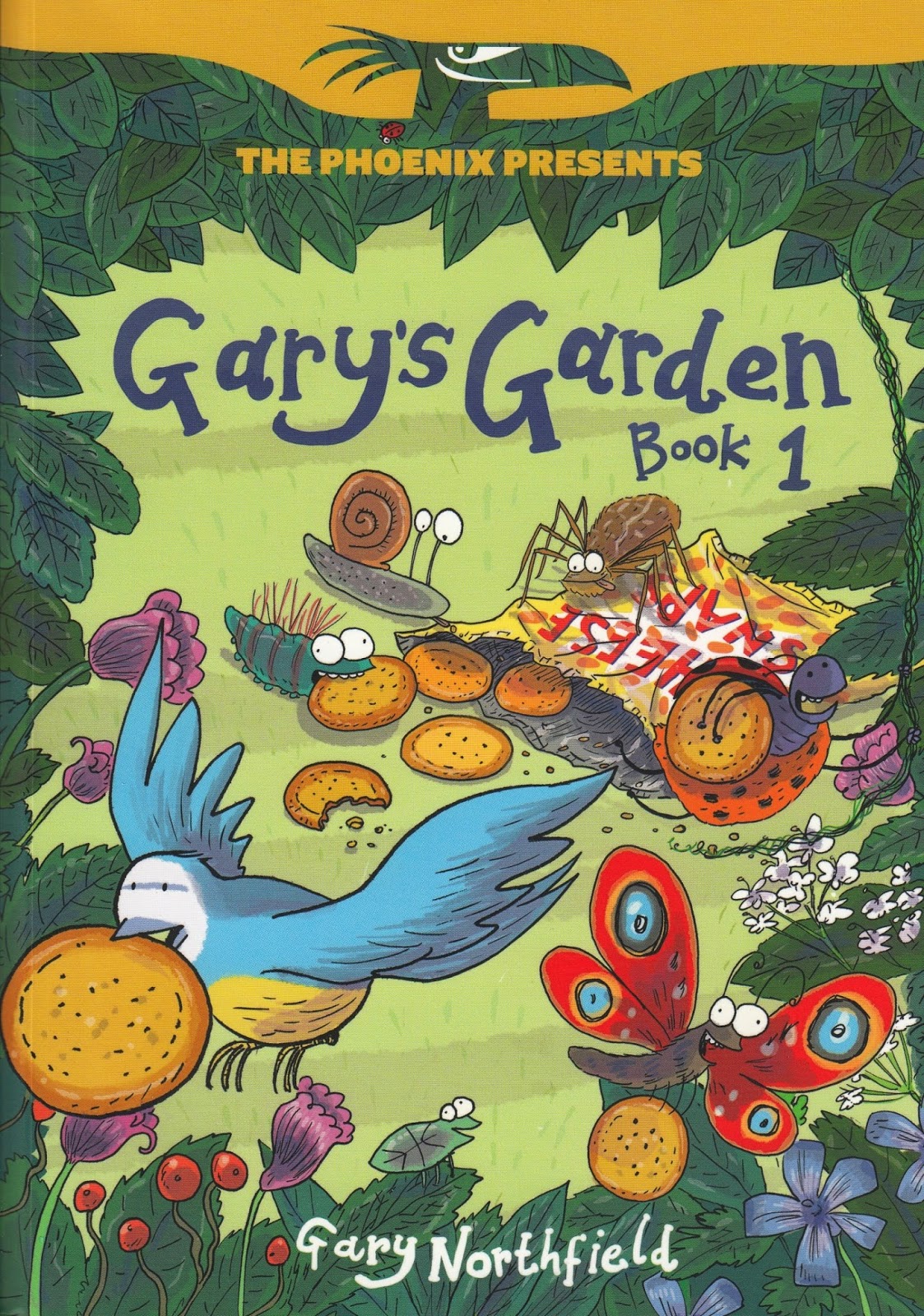 Whatever the opposite of 'glacially paced' is, it is Gary Northfield's superlative-exhaustingly wonderful Gary's Garden strips, which in perfectly-formed 1-4 page instalments cover an astonishing range of tonal and stylistic ground, from daft hilarity to thrilling (but still quite daft) adventure to profound insightfulness to heartbreak, and all the way back round again to daft. Is it possible for something to be "daftly hearbreaking"? Is anyone else in the world besides Gary Northfield even capable of such a thing?

It's a pretty great comic, is what I'm saying. 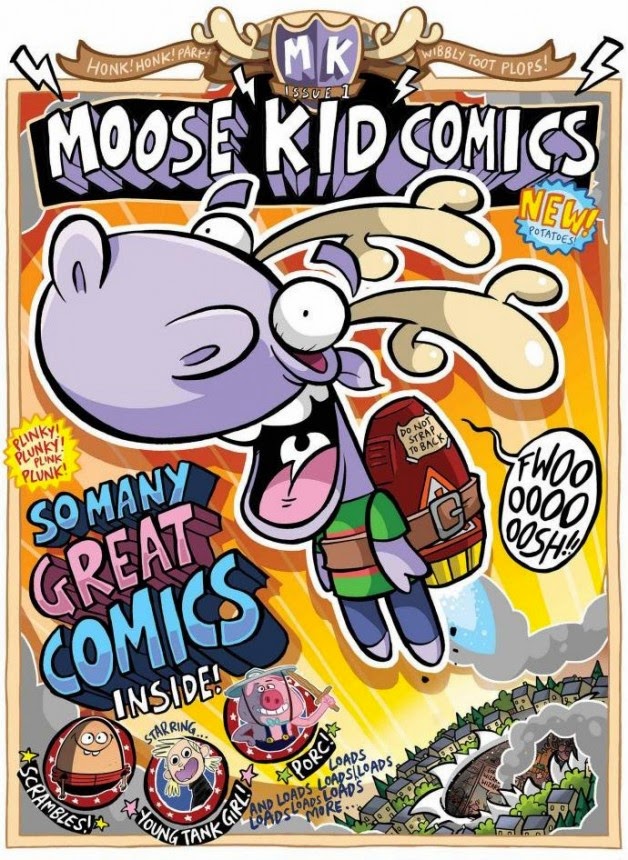 This is an extraordinary comic, a declaration of war on mediocrity and a statement of deadly serious, hilarious intent. The range of creators featured is staggering and gives the comic an astonishing, diverse visual richness that belies its mere 36 pages. If I had to pick a highlight from the boy's perspective it'd be Jess Bradley's CECIL P WOMBAT: EXPERT ON EVERYTHING, based solely on the amount it got quoted at me for weeks after his reading it ("How Dare you!")

I'm lucky enough to have a print copy - and really, I mean incredibly lucky; it's a wonderful thing and for days we barely even saw the boy, just his legs poking out from under this massive copy of MOOSE KID - but fortunately you can read the whole thing for free online so seriously, go do THAT. 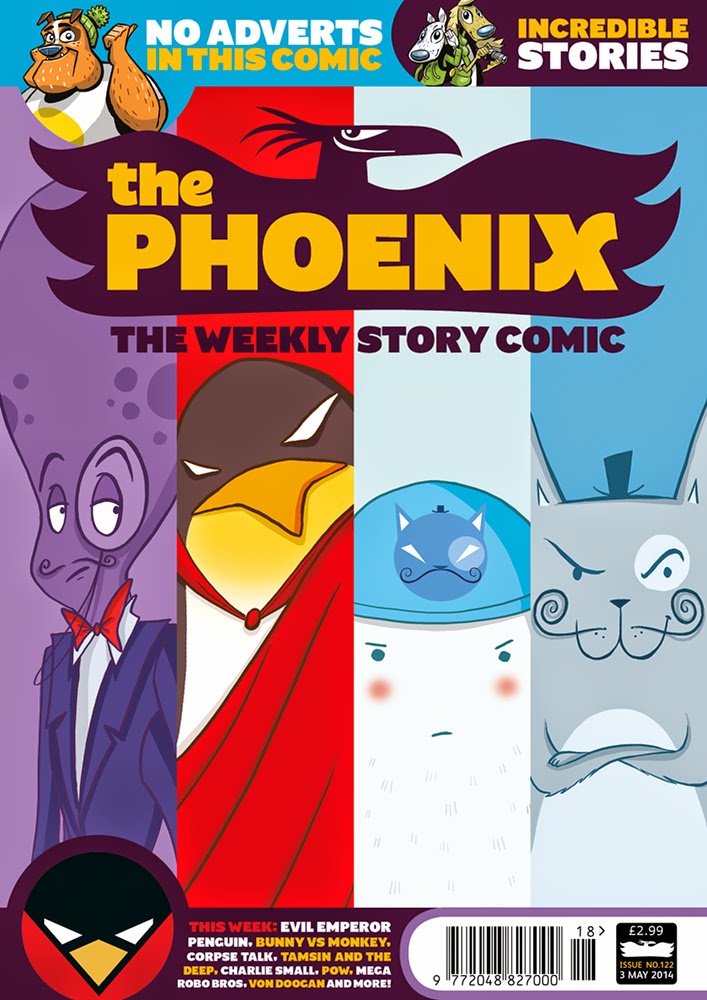 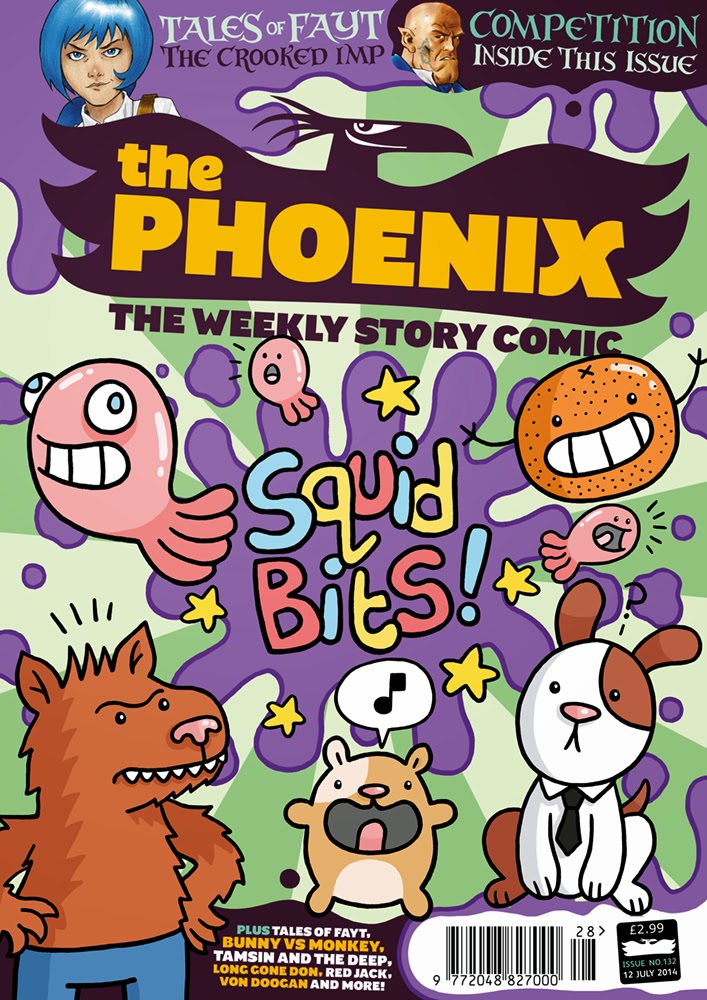 Look, I realise the Phoenix has been pretty well represented on this list already, but like I say, it's a subjective list. (Also, I think it's a pretty inarguable fact that this year they have put out a bunch of genuinely incredible books of children's comics, to an extent that is already warping the publishing landscape in this country in hugely positive ways). Anyway, I'm going to steer right into that subjectivity skid and recommend the weekly comic itself. Obviously. It's been a huge part of the boy's childhood since before he could read, and seeing him come into his own and become a confident reader and only come to love the comic more and more has been, honestly, more wonderful than I can realistically hope to express without sounding like a GIANT SAP.

If I had to pick particular favourites, I'd mention Laura Ellen Anderson's endlessly wonderful Evil Emperor Penguin and Jess Bradley's dementedly hilarious Squid Bits, both of which are the source of endless amusement frequently-quoted dialogue round these parts in any given week.

Okay! That's yer lot. As I say, an entirely subjective list that represents nothing beyond the particular favourites of one particular 7-year-old. There are several GLARING OMISSIONS, most notably: 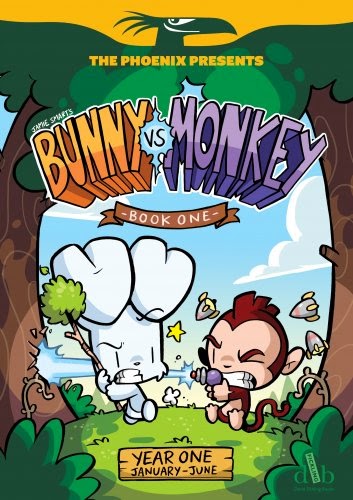 ...Jame Smart's Bunny Vs Monkey, and its solely because we haven't gotten to them yet; in that particularly case BvM is one of the boy's very favourite things in the world, hence my saving the book up to be a Christmas present.

For some hopefully slightly more objective, or at least wider-ranging recommendations of children's comics, check out some of the following places:

Also, if you're a teacher or librarian - I believe comics retailers like Gosh and Page 45 can offer a service where they will recommend and supply age-appropriate titles, so why not give them a shout?

Anyway, there you go: awesome comics for kids.

TOMORROW: THE FINAL CHAPTER! CONCLUDING REMARKS! AND... THE FUTURE!