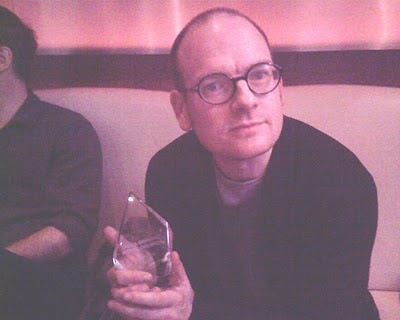 Comics Creator and Figure of Legend Dave Shelton, seen here brandishing his SHINY NEW AWARD
I spent this weekend having a lovely if slightly exhausting time at Leeds' Thought Bubble comics convention. Let me begin by offering huge congratulations to Dave Shelton (pictured above) for winning the inaugural Leeds Graphic Novel Award, at a ceremony held on Friday as part of the comics festival. The award was voted on by the schoolchildren of Leeds, and they voted Dave's Good Dog, Bad Dog to be their favourite graphic novel! (As well they might, it's terrific.) Both of the other first-round DFC Library titles also made the shortlist - Kate Brown's Spider Moon and Ben Haggarty & Adam Brockbank's Mezolith. A fine showing for Team DFC - congratulations all round, chaps!

Anyway, it was my first time at Thought Bubble and the day went really well. I sold a big old pile of Mo-bot High books, a bunch of posters and prints and stuff, and an absolute ton of my Slightly Strange Santa Cards. They seemed to go so well that I will almost certainly be printing up some more copies and selling them on my shop page, in case you're interested. Check back this week! 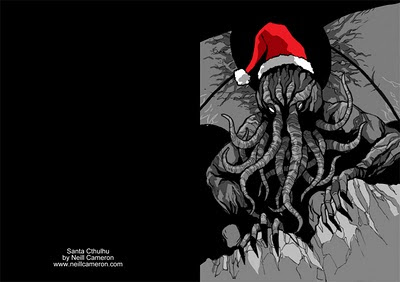 (Santa Cthulhu was the first to sell out, as I rather suspected he might be.)
Unfortunately my table-buddy for the day had to cancel at the last minute, so I was left looking after the table on my lonesome. This meant I really didn't get a chance to actually wander round and see anyone else or buy any comics myself at all. (I'd actually gone up with a shopping list of things I wanted to pick up, too. They were: Simon Perrins' new issue of Hope For The Future, the fantastic-looking anthology Solipsistic Pop #3, and Marc Ellerby's Chloe Noonan: Monster Hunter. Still, never mind, that's what the internet is for, right?) I also pretty much entirely failed to meet a bunch of people I had hoped to say hi to, or indeed spend more than about two minutes talking to pretty much anybody.

(I didn't even manage to get away and grab a sandwich, and was only kept going through the day by Pocky and miniature Mars bars which were occasionally bestowed on my by the kind and generally lovely Sarah Hatton at the next table. Thank you Sarah!) 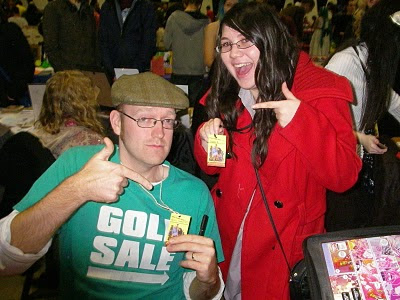 (Me and bestower-of-sweets Sarah Hatton, rocking our passes rockstar-style)
I did manage to get away from the table long enough to use the gentleman's convenience, and this was just one of the reasons that Dave Shelton is a Legend Whom I Shall Tell Tales Of To My Children and My Children's Children. The other was that he could change a tenner for two fives. I have to say so far Logan isn't very impressed by the fivers story, but he liked the one were Daddy Went Toilet.

The tiny amount of people I did manage to talk to were, fortunately, all great - it was fantastic to catch up with the aforementioned Award-Winning Graphic Novellist Dave Shelton, fellow DFC alumni Adam Brockbank and Faz Choudhury, my Best New Manga editor-san Ilya, Rob Davis (currently working on a Don Quixote adaptation for SelfMadeHero that looks rather marvellous), and to meet Simon Gane. (Who seems lovely.) I was really sorry I didn't get to see more of my DFC buddy Sarah McIntyre, who was running all kinds of kid-friendly alien-drawing fun and activities with her You Can't Eat A Princess collaborator Gillian Rogerson. And I only got to talk to Nigel Dobbyn for a couple of minutes but it was a very pleasant couple of minutes, and he showed me a sneak peek at something that put a giant grin on my face and is likely to have an even greater effect on a certain three-year-old of my acquaintance. Will share the details as and when! Around Christmas time, perhaps.. 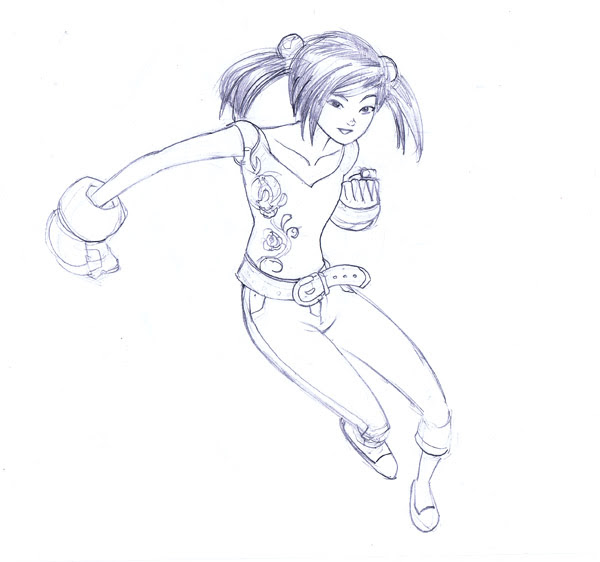 (I'm afraid I pretty much failed to take any photos all weekend, so here
instead is a Thumpculture sketch I did at the table)
One genuine and unexpected pleasure was meeting writer-artist Glyn Dillon and getting the opportunity to have a good leaf through a load of pages of his graphic novel-in-progress The Nao Of Brown (coming in 2012, SelfMadeHero again - those guys must be onto something.) Glyn's pages are just fantastic - stylish and cool in a way that recalls some of my favourite stuff from his Deadline contemporaries like Philip Bond, but with a looseness and naturalism to the characters and emotion that's just utterly engaging. I realise I'm gushing here but it's simply beautiful, inspiring stuff. Essentially, it's exactly how I wish I could draw, and I think I actually told Glyn as much. (I am not one to be afraid of gushingly embarassing myself to strangers whenever an opportunity presents itself.)

The Thought Bubble after-party seemed like a lot of fun, but due to the aforementioned exhaustion and general advanced state of physical decrepitude I'm afraid I only lasted about ten minutes before heading back to the hotel to have a lie down and a cup of tea and to feel incredibly, incredibly old.

Anyway, thanks to everyone who came and bought the book, to everyone who was lovely for being lovely, to Sarah and her tablemates for the Pocky and to Lisa Wood and all the other Thought Bubble organisers for putting together such a swinging comicsy shindig! I shall definitely come again!
Posted by Neill at 20:57