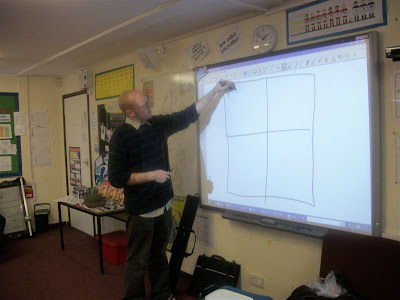 Comics creator Neill Cameron, seen here totally failing to get to grips with one of these new-fangled interactive whiteboards.

This Wednesday I was off doing exciting book promotional type things down in the west country! First of all, I was made enormously welcome by the lovely staff of Widecombe-in-the-Moor Primary school, where I was visiting to teach a bunch of children all about the fun of drawing comics and that sort of thing. I guess I hadn't realised that Widecombe-in-the-Moor was, quite literally, slap bang in the middle of the moor. Dartmoor, to be specific. In retrospect, the clue was right there in the name. Anyway, it was a lovely school in an absolutely gorgeous spot, and much fun was had there. 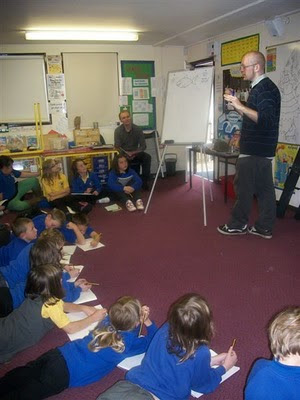 "So basically, kids take any story idea you have and put more robots in it."
I took along the latest version of my patent-pending Awesome Idea Generator (or Awesomeatotron, if you will) and we all had a lot of fun making comics about Gorilla Vampires, Killer Giant Marshmallows, Tiger Ballerinas and suchlike. Getting to do these workshops and see the sheer imagination and funniness of the kids taking part really is turning out to be one of the unplanned highpoints of my job. 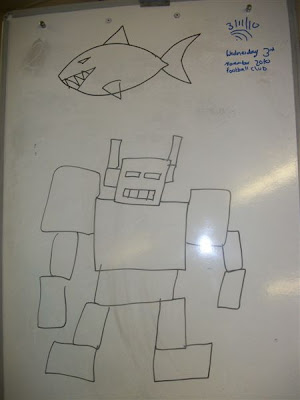 How to draw a Shark. And a Robot. PRO TIP: it's pretty much just boxes.
It was then a short hop back across Dartmoor to Exeter, where I was doing a talk at Exeter Central Library. I was a bit nervous about this, as it was the first time I've done this kind of event on my own, and I was slightly unsure about (a) whether anyone would actually turn up, and (b) what on earth I was going to do if they did. Anyway, I am happy to report that (a) they did, and (b) I kind of figured it out as I went along, and it was AWESOME. I mean, really. I'm uncomfortable with praising myself, but even I have to concede that it kind of turns out I'm genuinely good at this kind of thing. It was so much fun - kind of a mix of a talk, art lesson, stand-up comedy and interactive live drawing jam thing. Anyway, I really enjoyed it! I think the audience did, too. Together we put together an on-the-spot comics EPIC about the adventures of Secret Agent Soul Reaper, his nemesis Marissa Montezuma: Aztec Journalist and her hordes of Mindless Zombie Chavs.

Like I say, it was a lot of fun. And frankly, I think Marissa Montezuma: Aztec Journalist is the character find of 2010. Here is a sketch I did on the train home of her, with a tiger ballerina.

It really is kind of weird - I've always thought of myself as totally shy and awkward, and only good for sitting in a room on my own and drawing stuff, but it turns out you put me on a stage with a pen in my hand and my inner attention-seeking megalomaniac just jumps right out. Fun times! I'm really looking forward now to doing more of these school and library events - I've got a few bookings coming up in January and December and now I'm raring to get to them! Keep an eye on my website's Events page for more details as they're confirmed!

Huge thanks to Lis Spencer at the EXEtreme Imagination festival for inviting me along, to Kate Edwards and everybody else at the school and library for making me so welcome, and to all the pupils and audience members who came along for being so awesomely entertaining!
Posted by Neill at 15:58