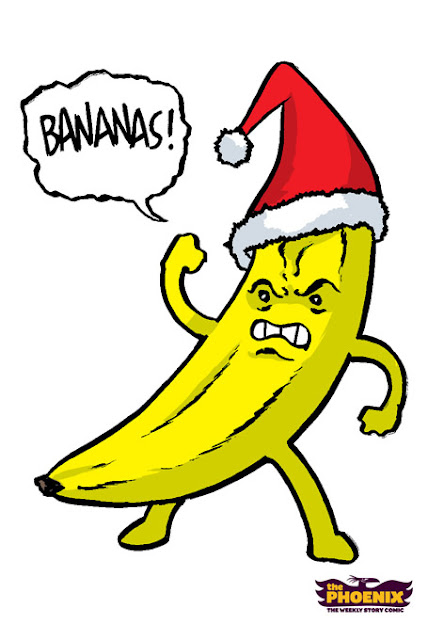 Behind Door Number 8 on Art Monkey's Advent Calendar, it's... Banana Banana Santa (and his Bananas Bananas Bananas)! Suggested by - well, by several people in fact, including Phoenix readers and pals James Christie, Jez Higgins and Craig Naples! Thanks all!

(Here he is without his Santa hat on, in case you have no idea what this is all referring to.)

By the way, while I'm here: just in case anyone thinks I have been corrupted by the filthy lucre of Big (well, medium-sized) Comics,  I just wanted to make clear that this year's ridiculous Santafest is, as in previous years, done simply out of the spirit of the season and because I like drawing Santas. I just thought that this year I could sort of tie it in with the Phoenix - well, as my Christmas present to them, really. It's a publication and a readership that have made 2012 pretty much the best year of my creative career to date, and I just wanted to do something to say thanks.

Okay, awkard moment of genuineness over! Check out Art Monkey's page on the Phoenix website for all the Santas so far, and to get started drawing your own! And please keep the Santa Suggestions coming, to: artmonkey@thephoenixcomic.co.uk

Email ThisBlogThis!Share to TwitterShare to FacebookShare to Pinterest
Labels: Santas 2012