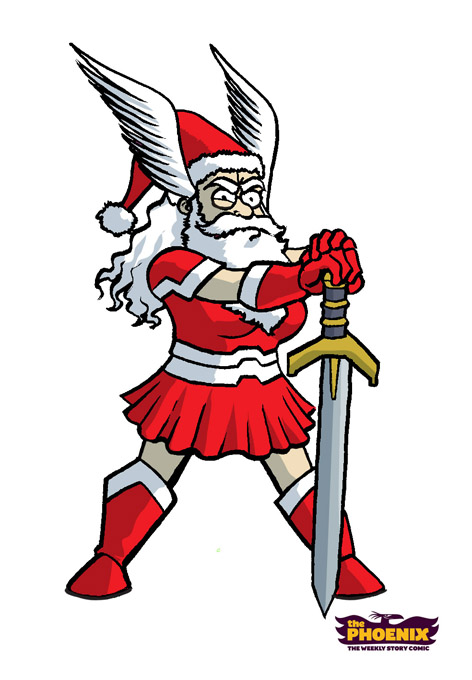 Yes, it's that time of year again! The time when for some reason, despite having way too much work to do already, I decide to draw a different Santa every day and post it on the internet! (For new followers: seriously, every year. 2008, 2009, 2010... I took a year off in 2011 and look, apparently now the world is going to end. Sorry about that.) Actually, this year's is going to be a little different - rather than drawing them myself I will merely be facilitating the event for my colleague Art Monkey, famed sketching simian star of the fabulous Phoenix Comic. Every day he'll be drawing a different Santa, based where possible on suggestions from readers of that august periodical. So if you - or any young Phoenix fans in your family - have any Santas you would particularly like to see, email them to artmonkey@thephoenixcomic.co.uk (I hope he doesn't mind me giving out his address like that). Or, you know what, just tell me and I'll make sure I pass them on next time I see him.

Here we are on the 3rd so we are 3 SANTAS IN ALREADY. Day 1 was Sheep Santa (suggested by Gemma Collins): 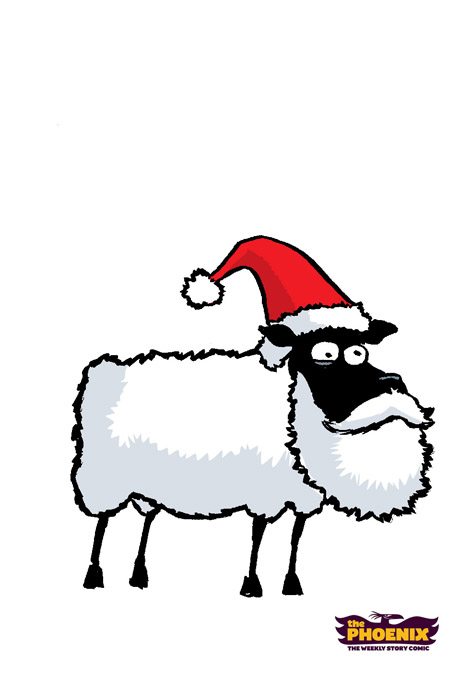 And then on day two we had THIS funky fellow: 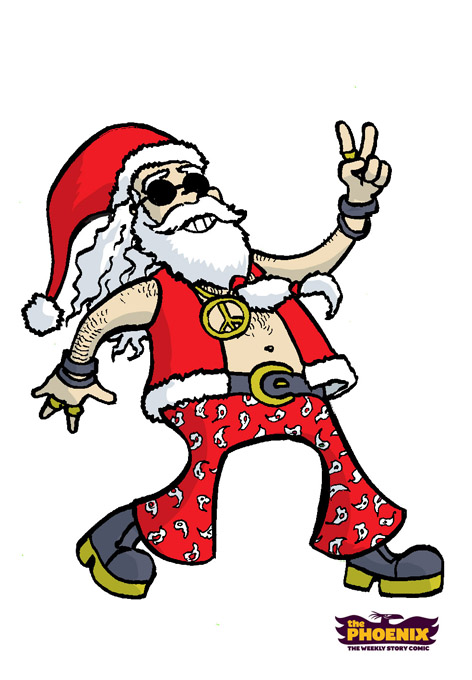 Hippy Santa! Suggested by Gemma Stephens. And today's entry was (my favourite so far): VALKYRIE SANTA, who you met at the top of this post - suggested by Phoenix fan Holly (daughter of @miss_sb on twitter).

More tomorrow - and indeed every day until Christmas! Follow the Phoenix on Twitter to see 'em as they appear. And I will try and collate them here. (I'll just check with Art Monkey that that's okay.)

AND as if that wasn't enough early-seeming festive cheer: I spent Thursday evening and then much of Saturday this week at the Oxford city branch of Waterstones, where my Phoenix colleagues Kate Brown, Paul Duffield and I were helping put together a funky window display. 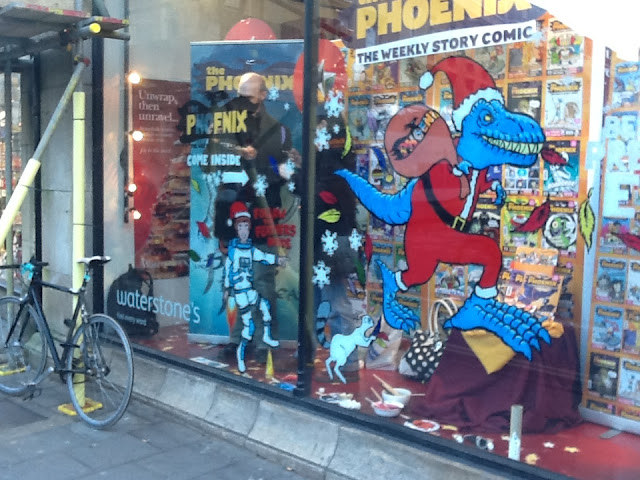 Paul and Kate finishing up the logo! 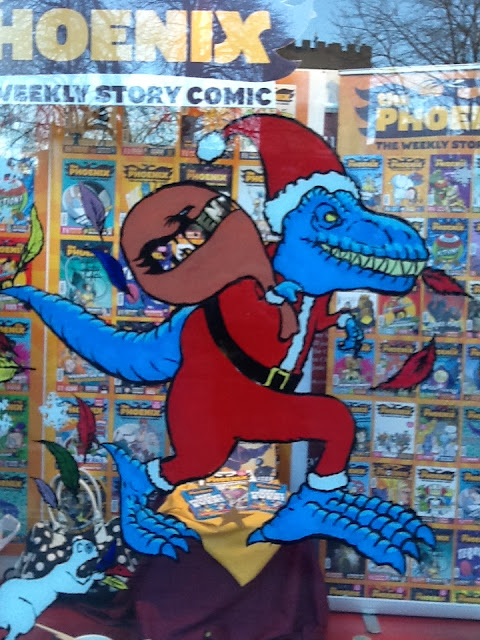 Santa Cornflower! Having her feet tickled by Bob. 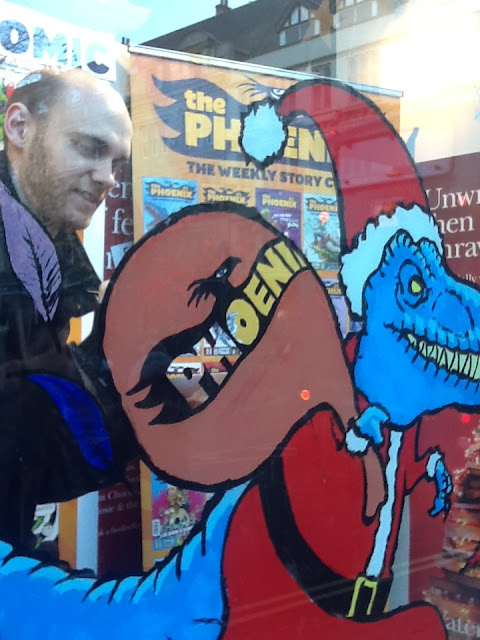 Paul Duffield, touching up a T-Rex.

The window painting was a lot of fun - it took a bit longer than originally planned but I genuinely loved the results, it just looks brilliant and hoepfully will entice lots of curious punters inside to buy comics and gift boxes. Seriously, if you live in Oxford, drag your kids down to Waterstones childrens section to check out the Phoenix Nest that's currently on display. It is RATHER MAGNIFICENT. 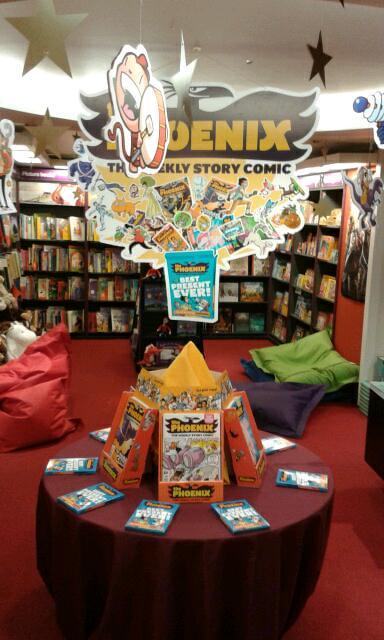 If you look closely at that image you'll see they're not only selling the weekly comic, they also have a stock of the rather excellent new Phoenix Gift Boxes. Each contains a brilliant little mini-comic, some badges and stickers and postcards and stuff, and- most important - a 5-issue gift subscription to the Phoenix! "BEST PRESENT EVER!" the box cries out, and frankly I rather agree. 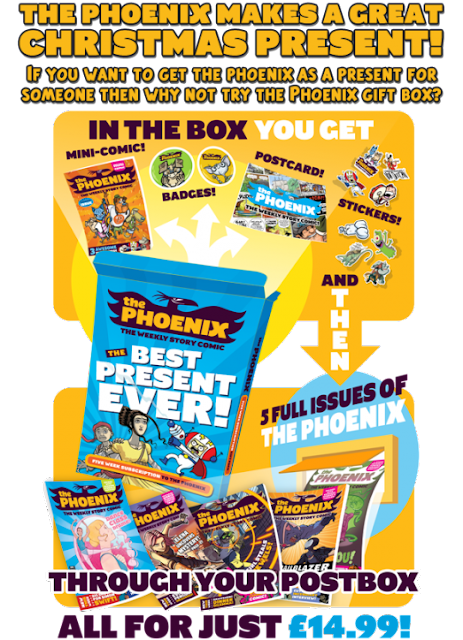 If you are thinking of christmas gifts for any children or comics fans or indeed just persons of taste, discernement and awesomeness in your lives: Phoenix Gift Boxes! And hey, if you get them now, your subscription'll kick in in time for you to catch the start of... 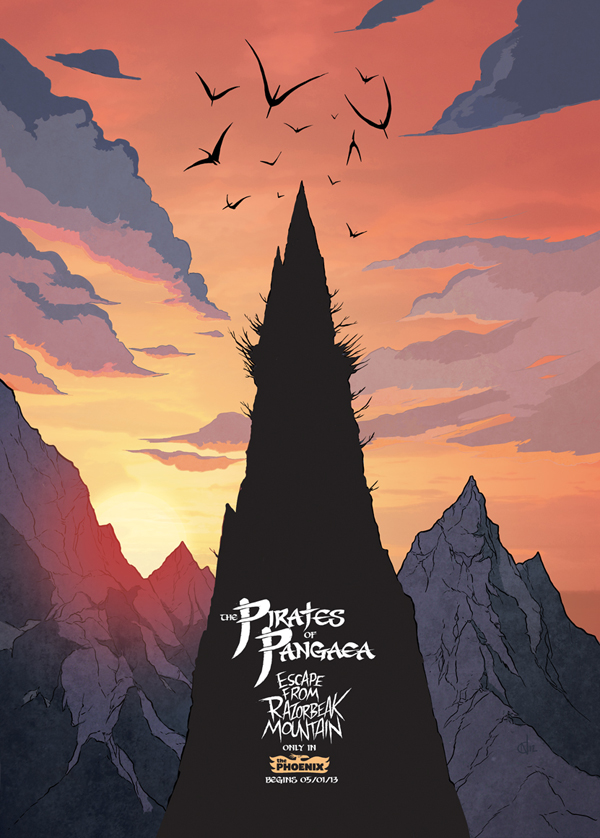 ...and let me tell you, you will not be wanting to miss THAT.

Email ThisBlogThis!Share to TwitterShare to FacebookShare to Pinterest
Labels: Santas 2012, the phoenix